Some discussions, you just know you shouldn't start.

Now, I'm reasonably clued-in on certain strains of music, and I did pick up my Australian passport from the post office this very morning, but I should have known I was on a hiding to nothing when I asked folks to recommend me some classic Australian garage rock. It has often occurred to me that Australia - and Melbourne in particular, with its array of fine drinking establishments tailor-made for seeing loud raucous rock bands in - is blessed when it comes to primordial rock music: The Saints and Missing Links being two prime purveyors of the breed, the Vines being a hopeless bunch of prime donna retards who can't even tune their own guitars but still think it's important that they should be in tune while pretending they're all 'street' and 'spontaneous', man. 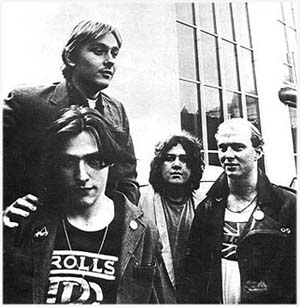 Unlike most actual saints -- or most other '70s punks -- The Saints would make it to middle-age intact.

There's a good argument to be had for grunge beginning in Australia with The Scientists in 1979. Ask Kurt Cobain. Oh wait. You can't. He's dead, and even if he were alive, you reckon he'd want to hang out with a two-bit Vampire Weekend-loving scruffy-faced loser like you? Oh really? Well, that's your call. OK, ask former Sub Pop owner Bruce Pavitt or producer Jack Endino or some cat like that. They know all about The Scientists and their scrawny ilk, swaggering down the streets of St Kilda. Grunge wasn't suburban metal at all, despite what MTV and Alice In Chains and all those stoner hair rock bands would have had us believe: It was stripped-back primeval rock music, no artifice, just SWEAT and BEER and heads banging in bass speakers. In other words, Australian garage rock.

Or not. Your call.

So whatever. Australia has just as great a tradition of garage-rock bands as Peru or Germany or all those other places overlooked due to the American imperialism practised by Western rock critics everywhere. Sure, The Easybeats ("Friday On My Mind") were a chart band, but they had way more in common with those Nuggets and Pebbles compilations that helped define the genre than ... um ... something else.

So I took it to the bridge, and checked in with the music fans populating specialist Aus music site Mess And Noise, as well as the array of fanatics, critics and Cobain-heads that make up my following on Facebook: RECOMMEND ME A GREAT AUSTRALIAN GARAGE BAND. These are the edited highlights of what they came back with ...

1. What's your definition of a garage band? Starts in the garage or stays in the garage?
This one's easier not to answer. It doesn't fucking matter. I never really thought anyone took the term literally, though I guess there's an argument to be made that in America it was an entire generation of Rolling Stones fans aping - and sometimes bettering - their heroes in their parent's suburban garages, a myth that was still clearly alive when punk began in the UK in '76, with The Clash shouting "We're a garage band/We come from garage land" even as they donned their army fatigues and toy machine guns for corporate fashion shoots in Northern Island.

I always find it best to easier to duck the question altogether and give examples: Jim White and Mick Turner's post-Moodists and pre-Dirty Three band Venom P Stinger; current-day press sweethearts Eddy Current Suppression Ring (a band that has made a creditable career out of religiously listening to the same early Pavement song over and over again, and copping Lightning Bolt's 'stage' act); Melbourne's proto-Riot Grrrl heads Matrimony; The Birds; anything coming out of Brisbane in 1974 but most specifically The Saints ("the most primal band in the history of rock'n'roll"); early pre-punk trailblazers Radio Birdman, even some of the early-'90s sides of You Am I.

I'm aware that this makes the definition as fluid as the person wielding it, but I guess I'm talking a certain attitude and use of guitars. And I'm also aware that this definition is at odds with almost everything that follows so ... um ... don't listen to me. Listen to them, especially Tim Pittman at the end of this article. He's the expert. 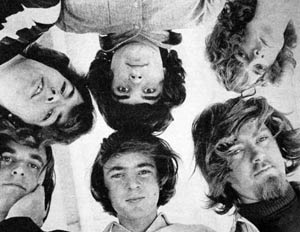 2. Missing Links (writes Fowltonmeans). They weren't in a garage though, they practised above a shop in Epping in Sydney. Matrimony was more of a warehouse band. Who are The Birds? Guess I'll have to read your article.

Oops. Yeah, '60s beat combo Missing Links. Sydney label Half A Cow reissued their self-titled album on CD in 2001, and mighty fine it is too, performing all the actions and making all the sounds you'd expect. I have no real idea who The Birds are either, except that they rock and showed up on a bootleg compilation I downloaded off the net a few months back entitled Doctor Fuckwit's Boss Oz '60s Garage Punkers, alongside the equally genius (if more chaotic) Purple Hearts and Peter Tilbrook and the brilliantly named Wild Colonials.

Fowltonmeans goes on to explain that he while he digs The Easybeats - c'mon, The Easybeats dudes, I know you're American and everything but 'Friday On My Mind' has been voted Best Australian Song Of All Time, and is as great as anything by even the fucking Kinks - they were as much a garage band as Lemon Pipers or Supertramp: "They would not have seen the point in playing in the garage for the sake of it." He suggests The Throb and Craven Fops instead.