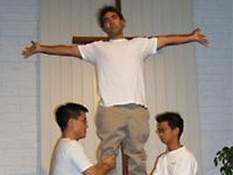 Encourage employees to bring their children to work - they make great entertainment!

Spiking the water cooler with a unique combination of stimulants and LSD ensures increased productivity and a worker attitude that's "hard to beat." When you see somebody in your office bashing the tape dispenser against their cubical wall repeatedly and shouting, "THERE IS NO GOD IN THIS BUTTERY FROGSTEP", you'll know they've just helped themselves to a heaping cup of success!

Ideal employees should view success not as an option, but as an inevitable outcome. Demonstrate the importance of succeeding to them in small steps. Purchase an old arcade machine and let the workers play as much as they like. Merely warn them that if they don't beat the game, well, they'll need to "bend over and drop their pants while you get the Maglight."

Hiring a circus clown may seem like a funny and wonderful idea, but think about it before you put the guy on your payroll; will the benefits outweigh the consequences? Would you really like somebody on your staff squirting seltzer water all over the president of GM? How about somebody "finding" a nickel behind the ear of the Pope, who you are interviewing for that tough position in HR? It may be amusing at the time, but your company will pay for it sooner or later. Look into hiring midgets instead. If they turn out to be poor employees, at least you can throw a tablecloth over them and shout, "oh no, it's a Jawa from 'Star Wars'!" and then run around in circles expressing mock fear. Midgets find that kind of humor fresh and appealing.

It's common knowledge that the more options, bells, and whistles you include on a computer, the easier it is to break and lose important data. Force all employees to use DOS 6.22, without RAMDOUBLER. This will also save valuable company money, as you don't need to buy "unnecessary" items such as CDROM drives, RAM manufactured in this decade, or monitors which can display more than eight colors at once.

If there's somebody who isn't being as productive as they should be and you'd like to fire them, do so in a manner that will seem justified and understandable to all the other employees. For example, announce a "Dress Up Like Your Favorite Pokemon" day at work. When the troublesome employee shows up that day, you can easily fire them by giving them a stern look and saying in a very solemn tone of voice, "I'm sorry, you're not dressed as Metapod, my favorite Pokemon. I'm afraid I'm going to have to let you go." Firing employees over a Pokemon-related incident is encouraged by the government.

NOTE: This idea can only succeed if the worker does not dress up as Metapod. 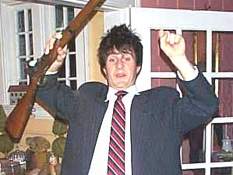 A little in-house skeet shooting helps loosen up even the most overworked of employees!

It's a sad fact, but as an employer, you must realize that 73% of all employees die at work. With this in mind, you may want to design your officespace with "convenience" in mind. Make every floor cave in towards the center of the room, where a gigantic hole leads to an incinerator at the base level of the building. This way, when an employee keels over and dies, his corpse will harmlessly roll down the floor into the hole, where it will be immediately consumed in flames! To counteract the forces of gravity on non-dead employees and their office supplies, industrial-strength fans should be installed around the hole, blowing air away from it. The miracle of science at work!

Although giving employees a bonus is surely a kind and generous gift, it (by definition) results in more money being taken from the company's dwindling checkbook. When presenting a worker with a monetary bonus, draw their attention away from the check by pointing away from you and shouting, "Look! It's professional magician Artie Ringwald!" Then, when the employee turns to look away, take the check, rip it up, and stuff it in your pocket. When the sap turns around and asks who the hell Artie Ringwald is or where his check went, ask "what check?" If he tries to give you any more grief regarding the payment, point away from you and shout, "Look! It's professional magician Artie Ringwald again! And he's engaging in oral intercourse with your wife!" Then run away and start a new company.

"Casual Dress Friday" should be scrapped for something more effective such as "Brutal Child Labor Friday".