Greetings fellow humans! I have recently become aware that many "dot com" companies are opening and closing faster than a prostitute's legs upon noticing a reddish glow to one's pubic hairs. A wise man once said, "planning for the future is uncertain, but only a fool spends his money on the past." Sounds pretty deep, doesn't it? I made up that saying myself while I was traveling through the "Wet Coast Express" water slide at the local theme park! When I had emerged from the end of the slide, I was shocked and appalled to notice my lack of a bathing suit! Luckily I remembered that I had entered the attraction naked to begin with, so I did not have to worry about raising enough funding to afford another five-dollar "My Little Pony" wetsuit. Alas, I am getting off track here, and for that I apologize.

Many large corporations are finding themselves in a financial crunch these days, either due to poor investments or a shrinking marketplace. Companies are finding it increasingly difficult to slow their tremendous cash burn rates and operate at a manageable cost. This is where I, Leonard Crabs, comes in. While I have been legally prohibited from professionally offering my corporate training services (you would be surprised how quickly sexual discrimination lawsuits can pile up), I can present to you, the reader, some of the best and most effective tips to make your work environment a more enjoyable and cost-effective environment.

One of the most important factors to consider when contemplating workspace changes is worker productivity. How will employees react to such a change? With this in mind, let me share a few "industry secrets" with you: 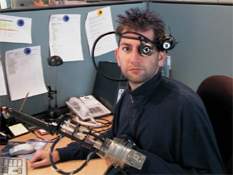 Model employee EX-2041 demonstrates worker loyalty by dismembering his own mother and using her bones to fuel the furnace, thereby cutting heating costs.

Employees want to work in an environment that is comfortable, but not TOO comfortable. If workers are too "at ease", productivity sharply declines. Provide employees with lush, soft, relaxing chairs which sporadically emit a burst of tear gas every 10 minutes.

To cheer up stressed-out employees and boost worker morale, take all your employees to a "special performance of 'Battlebots', just for our company!" Lead them into a dark closet with a large piece of plywood in the center. Throw a stapler and an iron into the middle of the room and shout, "Look at them go after each other! The militant metal machines fight to the death!" After five minutes, bash the stapler into a thousand pieces with a sledgehammer and scream, "You see that? That could be you if you don't cheer the fuck up and start working harder, you depressed little idiots."

Putting agitated, venomous cobras in a drawer marked "HIGH PRIORITY ACCOUNTS" can add a touch of excitement to a dull day and wake up those sleepy employees!

By installing air raid sirens on the ceiling every 10 feet, you provide your workers with an easily accessible way to determine if the workday is officially over! Also, you can warn them when Hitler's undead legion of Nazi zombies begins "Blitzkrieg 2: Electric Boogaloo" or when lunch is being served in the cafeteria.

People like looking at things that are physically attractive and appealing. Why not consider replacing all the ugly people in the office with experimental, armed robots? Or fashionable lamps?

Employees bring monitored via hidden cameras and wiretapping are often not aware they're being observed, and as a result, will not act as productive and competent as they can. Let your workers know they're being watched and having every move recorded! Cough frequently into your microphone while wiretapping on their phone! Purchase hidden cameras built in the 1970's that are the size of mature watermelons! Post signs on the restrooms that say "If you have diaherria, please do not relieve yourself here. It may cause the recordings to become blurry and indistinguishable."

Scientific surveys and polls show the the top three worker concerns are:

While the first two concerns cannot be realistically address, the third can easily. By creating something as simple as "Ghost Protection Stations" throughout the office, workers can rest much easier knowing that enraged specters of the dead will not steal their office supplies or decapitate their children. To build your own "Ghost Protection Station", simply take a fire extinguisher case off a wall, draw a picture of a ghost with a red "X" through it, and store a large thermonuclear grenade inside. That should soothe the nerves of even the most worried employees!