How to Win at Diablo II

Wednesday, Oct 11, 2000 by Hakan (@TwitterHasBannedAllMyAccountsEver)
Intellectually stimulating games are perhaps the greatest achievement of the video game industry. Fortunately, this is not the case for Diablo 2. As you might have guessed, this is the sequel to Diablo, which came before Diablo 2... I think. Anyway, the holier-than-thou staff at Blizzard have defecated out another blockbuster hit. In this guide I hope to provide useful information, get you on your feet in the confusing world that is Diablo 2, and offend the good majority of readers. 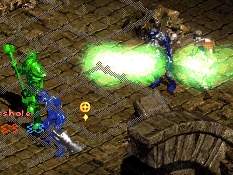 Diablo 2 is fun for all ages, meaning things like skill and intelligence can be checked at the door. Blizzard wanted to keep the same "Dungeon Hacking" fun of the first, or as I'd like to call "click and bug goes squish," by keeping things simple. Blizzard also eliminated the annoying level loading screens. In its place, they have added a feature they like to call "massive lag" which reminds the players just how meaningless their life is. In addition, enemies get stronger as the number of people in the game increase, which means you will be doing fine soloing somewhere until another person joins the game. Then you will immediately die. Blizzard calls this "increased gameplay" because you will spend the next four hours trying to reach your corpse to get your items back.

Diablo himself is an easy boss. An "easy boss" is a boss that you won't die from before your computer can load the next frame. If you try to run away from him, he casts bone prison and holds you because he sometimes gets lonely in Hell and likes to chat with non-lagged company as long as possible. The best way to kill him is by hitting ctrl+alt+del twice, which is a secret hotkey. This trick works for almost any difficult scenario you might encounter in Diablo II.

Don't pick a weak class to play, such as the Amazon, Sorceress, Paladin, or Necromancer. Barbarians are the way to go. Picking any other class will result in hours upon hours of trying to kill a single enemy if more than two people are in the game. If you insist on picking another class besides the Barb, pick a female class. I can't emphasize enough the hours of sheer orgasmic ecstasy that ordering a woman, besides my mom, has given me. "Move here, now there, now you have to move back where you were before!! AHAHAHAHAHA!!!"

Blizzard tried to balance the game more by releasing a patch that "adjusts" some of the skills for each class. Basically, if you invested more than two points in any skill, your character is now worthless. This adds to the "replay" value Blizzard emphasized so much. 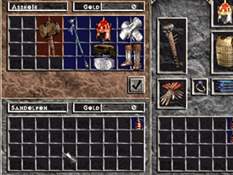 In order to make a server game that has lots of people joining, you must pick the right name. Names like "8 peeps for exp," "Naked Amazon Hack," or "8 men soggy biscuit contest" should work. If you still have problems getting people to join, do what I did: make a game titled "FREE FROSTBURNS GIVEAWAY," or something to that extent, and watch how the game fills up to the max before you can walk to the closest blacksmith. While the other 7 morons are bickering on who deserves the free item, go solo somewhere. In about 3 hours, they'll realize it was a trick and shoot themselves. Even better, say that you dropped the free items outside and kill them immediately after they exit town.

Another great thing is the new expansion that's supposed to come out next year. Knowing Blizzard, it will actually be released sometime after the Sun implodes on itself and the Earth is consumed by the resulting black hole.

It has been a pleasure writing this guide (speaking of pleasure, where'd I leave that CD...?). Only a few times a day does a game with this caliber make its way onto store shelves and into the homes of antisocial teenage males. Knowing the kind of games Blizzard makes, expect to repeatedly have to the urge to melt down your computer and drink it, effectively sparing yourself from the ensuing chaos that is Diablo II.