Wednesday, Jul 02, 2003 by Zack "Geist Editor" Parsons (@sexyfacts4u)
In my 25 years on God's green earth I have devoted myself almost wholly to the fine art of bagging supernatural monstrosities. I don't mean bagging in the sexy sense either; instead I mean it in the "make them explode, turn to dust, or bleed to death" sense. It's not an easy job, but thanks to my guide on going toe-to-toe with the supernatural you should make quick work of five different categories of monsters from beyond. Beyond what I haven't really figured out, but they're definitely not from these parts. 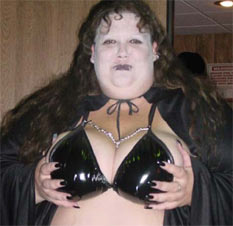 ALL monsters must be destroyed.In my life I have faced down vampires with little more than a guitar pick and a clean pair of pants. I've dispatched more giants than a giant murdering factory and lived to tell the tale. I have smothered more Firemen in carbon dioxide foam than I can count on all three of my hands and I can give you the hottest trade secrets about taking them out of circulation. What I'm most proud of isn't bringing down the Order of the Bloody Sun or smoking out caves full of giants from the Rockies to the Appalachians, it's the fact that I can impart this wisdom in you now.

Praying to Zeus can go a long way in warding off the unwanted advances of a vampire at a saucy disco, but I stand by John Madden's philosophy that the best defense is a good offense like the Hail Mary. Grab a hunk of turducken, pop in your favorite Credence tape, and buckle up, because it's going to be a wild ride from Werewolf to NYFD.

Overview: To this day it is unknown whether lycanthropy, or the condition of being a werewolf or similar shape changing monster, is a communicable disease, some sort of genetic aberrance, or the result of a gypsy curse. What we do know about werewolves is that they combine the less cool aspects of giant man-eating wolves with human cannibals to form a really huge man-wolf sort of creature rarely seen outside the realm of furry porn. Supposedly people with lycanthropy only change into this wolf form during the full moon, but those of you who believe that have obviously never worked the trucker shift at a Perkins restaurant. I think at least 30% of the patrons after about three in the morning are either werewolves or goblins and the remaining 70% are a huge amorphous creature not unlike "The Blob" except made out of mesh-backed hats, NASCAR shirts, and flannel jackets.

Danger Posed: Werewolves are fairly dangerous. When someone turns into a werewolf they lose all control over their normal faculties and revert to animal instincts, which usually mean they eat the nearest thing with a pulse. In some cases this may be nothing more than a goat or something, in others it may be you and chances are the werewolf wants to eat you more than you want to not be eaten by it.

Defeating Werewolves: The first thing you need to remember when tangling with a werewolf is that as big, strong, and toothy as they may be, they are not really much smarter than your average household pet. One of the easiest ways to frighten them off is by screaming "no!" or "bad!" and menacing them with a rolled up newspaper or shoe. Sometimes the werewolf's common dog sense might be overwhelmed by its need to eat your skull, in which case brute force is the only method that works. Tractors are excellent for driving over werewolves, as are steam rollers and 18 wheelers. They can be dodgy so be prepared to use throwing knives or some sort of improvised bola to immobilize them before running them down.