The Basics of War Survival 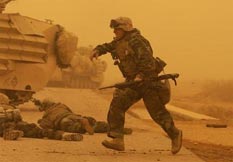 A US Marine attempts to avoid bullets.Before I get into the specifics of surviving this particular war I would like to cover a few of the basics of survival that apply to any war, whether it's being fought in the Mid-East against Iraq or on the moon against the legions of zombie cosmonauts. The first thing you need to remember is that words can hurt, but bullets can hurt a whole lot more and even kill you sometimes if they hit you in the right parts. When you go into a war zone many of the enemy soldiers will attempt to shoot bullets either directly at you or in your general direction. If they are shooting them directly at you then you should immediately dive into a trench, inside a tank, behind a lamp post, or under a bed. If they are just shooting them in your general direction then you don't need to worry, just climb out of the trench and yell "charge" or "get 'em boys". Nothing bad will happen to you.

You should put every effort into deflecting incoming bullets away from these vulnerable locations and into shielded body parts or generally worthless locations like calluses, blisters, and malignant moles. Most frontline troops will be issued some form of protective body armor, but that crap tends to be pretty hot and does not breathe at all, so discard it and remark dramatically to a nearby rookie that "you won't be needing this". Also, before beginning any attacks on enemy positions always make sure you have enough action points to make it behind cover before your turn ends.

Let's now move on to the specifics of surviving a war in Iraq. This only applies to the Coalition of the Awesome or whatever America is called in this war, the Iraqis have no chance of surviving. 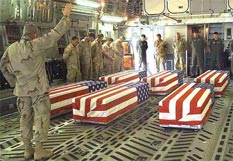 More victims claimed by a helicopter.At the time of writing this article the American casualties are somewhere around 25 killed, with a whopping 18 or so of those attributed to helicopter crashes. I'm not much with math and numbers and crazy things like that but I think that's something like 99.9% of the American casualties caused by helicopters. This is in a war, with people shooting at Americans and everything, yet somehow helicopters have been transformed into bloodthirsty murder machines. In fact, not only should you not go anywhere near a helicopter, you should probably put bows on them and drive them over to where the Iraqis are hiding. Then they'll be like "wheee look at this totally radical helicopter" and Saddam will come out on the balcony and say "awesome helicopters" and then Tariq Aziz will emerge from a sewer with the sewer grate balanced comically on his head and say "cowabunga duders!"

Then the entire Iraqi Republican Guard will mount up into the murderous Blackhawks and Apaches and crash them all into the ground and die. Except for Tariq Aziz who will be surfing and possibly "hanging ten".

For some reason the concept of "staying the fuck away from helicopters" seems to be causing a problem for the top brass, who keep insisting that crash-happy choppers get loaded full of elite commandos even though five seconds after liftoff they plummet into a canyon and explode. If you're ordered to get into a helicopter by one of your stupid commanders might I offer some plausible excuses to get you out of gyrodeath.

You contracted HIV from a Kuwaiti male prostitute and your lack of T-cells might cause you to become severely airsick and vomit blood into the mouths of fellow soldiers.

Your attempts to open a can of Vienna sausages that may or may not have been discarded because of botulism was such a disheartening failure that the trauma has left you with shell shock.

Your new age religious beliefs prevent you from rising more than a few feet above sea level or else face eternal torment in the bowels of a hip and alternative hell-like location.

You refuse to ride in a helicopter unless the pilot agrees to fly with the sirens on.

Your aunt was decapitated on the set of the "Twilight Zone" movie and her death has left you mortally afraid of helicopters.

Just grin smugly and say "you chumps ride in that helicopter, I'll use my jetpack." Then when they take off go back into your tent and nap.

Explain slowly and clearly that you are allergic to plummeting to the desert floor and dying in a violent crash or burning to death while trapped in wreckage.

If none of these options work you can attempt to drive the point home by sneaking up to the Brigade commander's tent late at night and chucking grenades inside. If necessary attach notes to the grenades that read "Vote no on Issue 35".
Previous More Guides Next