Wednesday, Jun 28, 2000 by Rich "Lowtax" Kyanka (@TwitterHasBannedAllMyAccountsEver)
Many websites and companies offer walkthroughs or hint books to popular PC games, but nobody's ever made a comprehensive guide to creating an actual FPS (first person shooter) game. Once again, filling the void that "popular media" has created, Something Awful has stepped up to help all the aspiring game authors out there. To appeal to the general, non-gaming populace as well, we have included pictures of various foreign children who might wash up onto our shores, clinging to partially destroyed rafts. 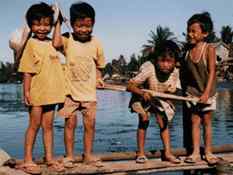 "America is a land of freedom and opportunity!"

1. When designing a map for the bad guy's ultra high tech, top secret base, you'll want to be sure to put an excessive amount of poison / acid pools below small, metal suspension bridges. This really gives off the impression that the head bad guy is evil, because he makes his employees work in a poorly ventilated base containing insane amounts of hazardous waste. Try to hint to the fact that they're not given health care either. The poison should always be colored green, because it is simply ludicrous to think that a liquid colored brown or yellow could harm you if you fell into it.

2. All computer monitors and screens should flash gibberish that has absolutely no relevance to the game. Optional: monitors can flash bizarre, alien-like looking symbols, despite the fact that the enemies speak fluent English.

3. When placing "bonus" ammunition or items, make sure to put them on top of extremely high ledges and platforms that are virtually impossible to get to. This stresses realism, because if you had a box of high explosive rockets in your home, would you place them on the floor where babies and dogs and the neighbors could get into them? No, you'd put them up in the rafters above your living room! It's only common sense.

4. If adding a large number of enemies in a single group, you'll want to put them near some object which explodes when shot. This adds a superb element of "strategy" to the game, because only the smartest of MENSA members will be intelligent enough to fire at the exploding object, thereby wiping out all the bad guys!

5. Somewhere in some level, you MUST include a bridge that has either been destroyed or is not functioning correctly, forcing the player to seek an alternate route. Bridges seldomly function as they are supposed to, and FPS games should reflect this.

6. Despite the fact that the bad guys are smart enough to make cyborgs that look and act completely like humans, they shouldn't be intelligent enough to give them human-sounding voices. All the noises they make should sound as if they're robots from the early 1960's.

7. All aliens and daemons want to destroy Earth. That is their only goal. Since aliens and daemons are stupid by nature, they'll try to accomplish this by attacking with brute force, in waves and waves of brainless enemies. Since daemons cannot use guns or firearms (it's a law or something), they'll use brute force. All aliens have complex, futuristic weapons that humans are somehow able to understand and figure out how to use within seconds of picking up.

8. The smaller the white medical box, the less health it can heal up. This is because scientists aren't able to pack in as much magical healing fairy dust into the tinier boxes.

9. Arms manufacturers only make large amounts of ammunition for weak weapons. As a result, you should place incredible amounts of ammo for the default pistol around every corner, hallway, and room. If there is an "ultimate weapon" in your game, make sure to never give out any ammo for it, because who the hell would use a gun that kills everything at once?

10. When explosives are detonated, much like in Bugs Bunny cartoons, they leave the surrounding area "kind of black and dirty looking".

11. Games that stress realism should also support being able to hold 50+ rounds of shotgun shells.

12. "Realism" in video game terms means "if somebody is shot in the head, they instantly die." No other terms or conditions must be met to be considered "realistic."