The folks at Skymall follow a simple marketing strategy: target people when they're weak. Since commercial air travel makes folks fear for their lives, they'll be happy imagining any future on the ground, even one surrounded by the dumbest products on the planet. As part of their probationary restitution, Nick Arizona and P. Jordan Dimebag sat in on Skymall's holiday focus group and produced the following observational log. We hope this seven-part guide aids in facilitating a festive holiday shopping season! 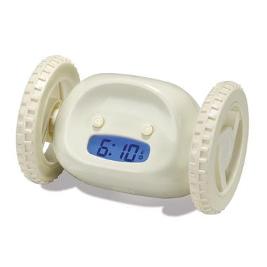 This is the alarm clock that rolls away and hides when you hit its snooze button, and it continues to emit a random pattern of beeps and flashes, encouraging drowsy sleepers to seek it out in order to shut it off. The wheels can move over wood floors and carpet, so it can maneuver into unexpected corners, increasing the challenge to find it. Wheels may be disabled in case of extreme frustration. (Skymall)

N: No man has ever gone bankrupt overestimating the power of technology to irritate humanity.

P: It's sad Segways have been reduced to this.

N: There's something utterly hapless and futile about starting every day scrambling to stop a tiny robot from breaking shit in your bedroom.

P: Keep in mind this sucker can't roll everywhere; Uncanny Valley, for starters. Though they did give it a rather pronounced Neanderthal forehead. It originally had a two-tone color scheme but it looked too much like blackface. Right now it's a composite of every single character and ship from Star Wars.

N: It looks innocent enough in the photo, but I'm sure at 6:30 AM those little buttons grow evil eyebrows as it scoots off your nightstand and creeps toward the nursery to tilt the crib out the window.

P: The rim of its face perfectly mimics those crummy plastic chairs in every pediatrician's office. I'd be more worried about this thing heisting your child and speeding off to the basement. Remember living in a dorm and somebody would leave town for a few days but forget to turn off their alarm clock? Christ.

N: The little fucker would be peeling out and doing donuts in their room, crashing against the door and beeping incessantly.

P: It would ramp off of the non-regulation hot plate and leave molten PVC streaks across the Trainspotting poster.

N: Essentially, this alarm clock tries to destroy you from the moment you wake up. The psychological toll it would take on a man would be devastating. Can you imagine a wild-eyed Runaway owner stalking through Radio Shack with a switchblade and screaming at the phones to stop staring at him? Or chasing a group of coeds through campus because he thinks their iPods are conspiring to steal his blood?

P: Visiting someone who owns this product would be hell, even during the daytime. There'd be speedbumps and tacks all over the house, maybe even an oil slick at the top of the stairs. It'd be like walking around a Spy Hunter level.

N: There's no frame of reference in the picture for size, so I imagine the Runaway ranges from normal clock size to that of a standard rickshaw. You see one rolling randomly through the streets loaded with fertilizer and farm chemicals and you know it's time to duck. What really chaps my hide is that this could just as easily been designed to serve man. It could gently nudge you awake in the morning with the newspaper and a fresh muffin from the corner store, but as it stands the Runaway seems more likely to callously scald you with hot coffee before it starts spitting battery acid.

P: After the prototype lost its power cord, some greenhorn could use the Runaway outside of the home. "Hmmm, I can't afford to be found sleeping on my guard job, but who's going to break into a natural history museum at night anyway?" Then he wakes up surrounded by a heap of broken dinosaur bones.

N: It seems the only way to circumvent the mayhem would be to stay up all night waiting for the Runaway to strike, which kind of defeats the need for an alarm clock in the first place. So in essence, this is quite possibly the perfect product.

P: They seem to be aiming for the guy who can sleep through virtually everything, even his wife screaming as a semi-anthropomorphic cylinder wraps her hair into micro-sized knots around its enthusiastic axles.

N: His wife should come to expect that kind of treatment. The real screaming should begin the morning after a one-night stand. Imagine being awoken by the piercing shrieks of your blubbery eight-beer conquest from her perch high upon a stool, where she echoes a Looney Tunes housewife by shrieking, "help, it's an internet virus!" while lifting her billowing guts like a flesh skirt.

P: I assume you can disable it by poking its eyes? It's like a military training device but instead of increasing firing rates or helping soldiers overcome the resistance to kill, it's conditioning an elite squad of child abusers. Eventually punching its face will be too easy and they'll hold it by the wheels for a minute to give the Runaway a sporting chance of breaking free with its desperate skull-banging.

N: You're assuming the Runaway doesn't possess some sort of weapons system. Spikes could shoot out of the wheels like in Ben-Hur. Maybe it could even release a cloud of ink. That would buy the Runaway some time to hide under a pile of laundry, or maybe even allow it to nudge its antagonist into Dead Man's Chasm.

P: Someone is going to soup theirs up with 30" chrome rims and shocks, enabling it to jump to higher surfaces. The Runaway would become an aptly-named symbol of modern man's hubris. I imagine the thrill of turning this off every morning and making it out the door to work is immediately usurped by the nagging fear that you only hit the "snooze" button. It would be like Inspector Clouseau returning to his apartment, wary that Cato could strike at any moment, the difference being that Cato wouldn't be in his ninth straight hour of trashing the place.

N: As infuriating as this thing is, I imagine it would be immensely satisfying to break just one of the wheels off and just watch it do pathetic circles in the morning. That's the kind of image I'd want to start the day with.