Steve's Guide to Putting Up With Your Buddy's Girlfriend

Wednesday, Jan 31, 2007 by Steve "Malak" Sumner
I guess a few people liked the last Guide I wrote, which was about Dungeons & Dragons. People sent me some really sweet barbarian art, and sometime I’m going to put that up on here, but not in this article. This article is going to be about a pretty heavy topic, so barbarian pictures wouldn’t really be appropriate.
You can trust me when I say that, because I am pretty relaxed about my standards of when barbarian pictures are appropriate, which is what got me canned from my job laying out illustrations for this company that made junk mail coupon books. There was this hot dog company that was running this coupon that had a picture of a pack of hot dogs, but I thought it looked gross, so I took it out and put in a drawing I made of a barbarian eating a hot dog, because I drew it and it looked awesome. But the hot dog place called up all mad, and said the picture was obscene, which I don’t get. I guess they thought the barbarian’s pecs were supposed to be boobs, but I think it was pretty clear from the muscles that the barbarian was a dude, so I don’t know what their problem was. So the place fired me, which is stupid. I like to say I got fired over creative differences, like when a band breaks up.

So speaking of breaking up, it is going to be really hard to start out this article because I have to be sensitive about my buddy Keith’s situation. You guys know about Keith because I have talked about him in probably every one of my articles. He is my best friend and we’re going to be best friends until we die, no matter what. He could kill me with a giant battle axe and with my dying breath I would go “Keith, we’re still buds.” I don’t even get mad thinking about that, because I know that if Keith killed me it would be for a really good reason, so my ghost would come back and high five him, and go “way to kill me back there, Keith, because I being really gay.” No offense to gays, I don’t mean he killed me because I was acting like I liked dudes, because that would be wrong, I mean he killed me because I was acting like a dick (I mean gay in the other sense).

I almost just went back and took out the word gay, but I decided to leave it in, because that is how I authentically talk, and because it allowed me to illustrate a point.

The only reason I am writing this is because Keith and Sheila are broken up right now. I told you in another article that Sheila had caught a case of lupus, which was a drag, but it turned out to be a HUGE drag, because it turns out there’s no cure. So I guess Keith found out about that and he wasn’t sure he wanted to spend all his time taking care of a sick person. She had also developed this rash on her face which was kind of a gross-out. So he decided he was through with all this lupus crap and he moved out.

Now that they broke up, I feel like I can talk honestly about how them dating and getting married made me feel. I don’t even think Keith is probably going to read this, because he’s staying at his dad’s place right now and his dad doesn’t have a computer. But if he does read this, I want him to know that I don’t mean him any offense because he’s my main man.

Anyway, you have probably been here: you have a really good bud, maybe even a best bud, who you spend most of your time with. You’ve known this bud since you were in school and you have all kinds of secret jokes together, you’re always ready to hang out at any time for any reason, without calling before and making sure it’s okay to come over.

This is a serious guide about how to put up with your bud’s girlfriend. I know this is a humor site so I’ll try to make it pretty lighthearted, but this is close to my heart so forgive me if I get serious about this.

Part One: The Third Wheel 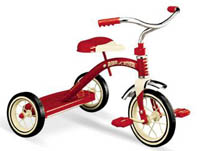 You don't want to be a trike, because they're for stupid kids. Now, if you’re anything like me, you love babes. I love babes. Babes are the greatest, and I could think about babes all day long. Sometimes I do. The ideal babe is kind of like the woman mirror of a barbarian: she has long, big hair, she’s tough, she has really big pecs (in her case, they’re boobs, which is the kind of confusion that leads to losing jobs at coupon companies), and she is a great lover in bed. Just like you’re not going to see too many barbarians in real life, you’re not going to see too many babes in real life.

Now, I love Keith, but Keith is not a barbarian, and neither am I, so babes are not too interested. We’re just guys, we work for a living, we talk about karate, and we play some D&D. I don’t have a lot of ambitions when it comes to babes. Some day a babe is going to come along and she’s going to see that I’m a good dude who will treat her right and maybe cyclone kick somebody in the head if he’s mean to her. Until then, I’m not really going to bother with girls, because for me it’s babes or nothing.

Now again I am not saying anything bad about Sheila, but I think Keith kind of said “okay, I am tired of waiting for a babe, and I am going to go out with this fat girl from work just because she asked.” That’s fine for him, but it’s not for me. When I go out with a babe, it’s going to be all like “well, I was walking down the street and these thugs were attacking this babe and I went against my sensei’s teachings and really kicked the tar out of them beyond what was really necessary, and the babe’s shirt was all torn and she was like ‘take me home and hold me,’” and it’s not going to be a thing where I just like her because she’s all I can find.

So anyway, your buddy is going to find this girl and a bunch of stuff is going to change. Wherever you go, this girl is going to be around. You can’t do the same inside jokes anymore, because she won’t get them, and if you make a Star Wars joke your bud is going to have to spend five minutes explaining it to her, because girls don’t understand Star Wars on an instinct type level, like we do. She’s going to kiss him in front of you, and it’s going to be gross. You won’t be able to go out to eat at Wendy’s anymore, because she will be like “we always go to Wendy’s, let’s go to a real restaurant,” and then you’re going to have to spend like twenty bucks. Yeah, and we don’t “always go to Wendy’s” because you never freaking LET US go to Wendy’s.

Basically, you need to understand what a “third wheel” is. Sometimes there is a situation where two people want to be together, but a third person is always butting in and being annoying and hanging around all the time. To you, your bud’s girlfriend is the third wheel, because she ruined the vibes between you and your best friend, maybe forever. She might be a nice girl (which she’s not, she complains all the time and hassles you about how you live at home even though you were only 25 at the time and that’s really not that bad), but she is going to become your enemy and play tricks on you. But what you have to understand is, and this is crazy, to her, YOU are the third wheel. SHE doesn’t’ want YOU around.

You might be like “but a third wheel is good, you add one more wheel to that and you get a car,” but trust me, it’s bad. When you add another wheel to a bike, you get a trike, which is for kids, or you get one of those big three-wheeled bikes that hippies ride sitting down and they have a little trailer on the back for their little dog. Those things are at the maximum ultimate peak of gay, and I’m halfway using the word gay literally in this case (no offense to the gays again).