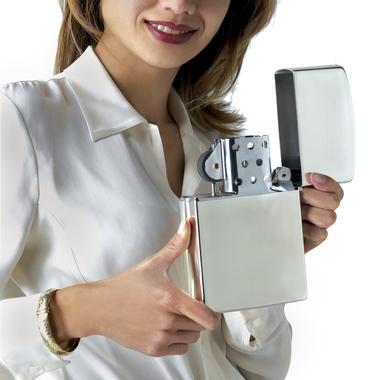 Be the life of the party with our Giant Lighter. Imagine the looks on your friends' faces as you casually pull out your Giant Lighter to light their cigarette. People simply have to know where they can get one. Good for a thousand laughs over a lifetime, we couldn't help but include this one-of-a-kind Giant Lighter into our gadget collection. (Skymall)

P: Scene: a party without life. A woman pulls out a lamp-sized cigarette, then pouts. She has nothing to light it with! She casually eyes the banquet hall for flags or Beatles paraphernalia to burn.

N: A man with a bulge in his jeans the size of a cereal box saunters up to the hapless damsel. With a single heft of his straining bicep, he lifts a thirty-pound cigarette lighter to her face and, with a restrained grunt, flicks the mighty flint.

P: A man with a brick-sized lighter stares on incredulously. He inserts his lighter back into his pants, glancing around to make sure no one saw his faux pas. Before the dame can light her Duraflame chimney, a man in velour cape catches her eye. How had she failed to notice his tombstone-sized hunch? With a snap of his badly calloused fingers, six manservants lift his cape and remove his massive lighter. Like pallbearers, they hoist the lighter to the end of her tobacco flagpole.

N: She winks in gratitude as the servants use a system of pulleys to flick the flint. The ensuing flame engulfs the top half of her face, burning her in a broiling butane nightmare. Months later, she appears in the above picture to both express her eternal regret and extoll the virtues of a sensibly gigantic lighter.

P: Did we accidentally critique a public service announcement? High society is rife with disaster, between fire hazards like home meth labs and the jackass that snaps open his mattress-sized Zippo. Either that or Skymall's pulling a fast one on us by selling a normal lighter using a five-inch model.

N: Her cocktail-napkin blouse has an impossibly bright satin sheen. Wait, maybe this is a picture of her residual self-image from the Matrix. She sees herself impeccably dressed, though in reality she's just a Polly Pocket with a beer-stained napkin draped across her narrow, mouse-gnawed shoulders.

P: The entire background also has an impossibly bright sheen. It's one thing to edit out the background but there's not an ounce of color anywhere on the surface of the chromed lighter. Has she set everything in the immediate vicinity on fire? Also if that's her idealized self then she must fancy facial creases that look like Pancho Villa's mustache.

N: Yeah, you should be able to see the camera reflected in the lighter, which means this image was either taken in the complete whiteout of a blizzard or created by the little girl from The Ring. There is no possible third explanation.

P: I guess her parents never let her anywhere near a lighter and she assumes they're much bigger close up, a mistake frequently made about the moon. But why would she be drawing someone with a lighter if she's thermokinetic? That's like Superman doodling a guy wearing a huge kevlar vest.

N: All the great renaissance artists did that kind of thing. Did you know that in all of Da Vinci's paintings you can see Leonardo at his easel reflected in a mirror somewhere? In The Last Supper he's in the door of Jesus's El Camero.

P: I really hope the model is M.C. Escher's estranged wife and she made a million dollars from this shoot right after he spent countless painstaking hours completing Self-Portrait in Spherical Mirror. "Suck it, M.C., not even one single planar reflection!"

N: I read Escher only painted that way because he couldn't paint realistically. To him, a bowl of fruit looked like birds turning into fish or some bullshit. His wife one-upped him artistically with a drawing she did while playing Hangman. That's why Escher cut off his ear.

P: I'd really like to see Escher design a hospital. Throw away hypodermics and they'll jab your ass through the air duct. Flush a toilet and you'll need a few more people in the operating theater to dry out the open-heart surgery.

N: That's why Escher's career penning adult comics never took off. Everything looked like dicks pooping out butts and boobs.

P: Maybe he was just lazy. "Okay, I'm drawing turtles, nah, fuck that, now I like dolphins. Now we're in New Orleans. Dolphins look like motorcycles, right?" That's what Samara did here; she may have the ability to ruin people's days through time and space, but dammit if she doesn't have more than three film negatives to draw on.

N: Maybe we've wandered too far in our journey to comprehend what is simply just a lighter the size of a mini-fridge. You know this product was born when a suit in a business meeting realized, "hey, people like regular sized lighters. Imagine how much more they'd like a REALLY BIG LIGHTER?" It's that simple!

P: That was probably his consolation after eliminating funding on a multi-billion dollar development. An irritated engineer asked, "what the hell are we going to do with a million personal jetpack chassis?" You know, we should be thankful the novelty is restricted only to its size. Imagine one of these things releasing a subsonic, four minute shriek of "Git 'R Done!" We're talking brown- frequency range.

N: I'd buy that in a heartbeat.