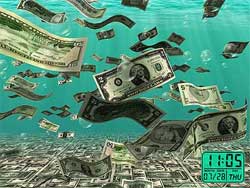 It is 11:05! That is the time for free money in a pool!Something Awful and advertising go together like peanut butter and gasoline; nobody really seems interested in combining the two effectively, perhaps in order to create a highly flammable sandwich of some sort. I swore off advertising a few years ago, burned thoroughly by the 2001 dot-com bubble bursters like eFront and the Gamefan Network, two of the only companies that managed to somehow act more incompetent than Something Awful. As 2006 drew to a close, I reluctantly began inching back to the internet advertising scene, much like a burned child approaches a stove. I don't know why the kid wants to walk towards a stove. Maybe there's a peanut butter and gasoline sandwich on top of it.

A few different ad networks pursued us, and many were turned down once I discovered they were evil machines powered by the wretched fuel of free screensavers, iPods, college diplomas, and screensavers of college diplomas. I didn't want some advertising network spraying those stupid flashing "complete this survey and win a free white child" animated gifs of horrible all over our pages, I wanted a company that believed in serving legitimate, desirable ads for companies not directly founded by Satan himself. I thought my lofty standards had been addressed when I received this email February 28th, 2007 from Valueclick Media.

How are you? My name is Cheryl, and I am contacting you from ValueClick Media. We are one of the largest advertising network yielding our publishers high eCPM, and giving you complete transparency in our system. I am getting in touch with you regarding working together as advertising partners for 2007.

I am interested in learning on how we can work together to sell your remnant and non-remnant inventory on Somethingawful.com. Please get back to me to let me know when it would be a good time to chat and I can tell you more about what ValueClick Media can do for you. 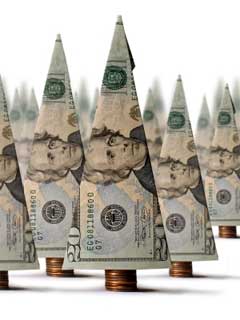 These are money trees, they stab your eyes.Woah! Sounded good to me! ValueClick had a fairly decent reputation and definitely wasn't one of those "here today, full of cinder blocks and tackling dummies tomorrow" operations that made the internet such a wonderful place to be part of a half-decade ago. To be honest, I was somewhat flattered they had contacted me and were even interested in serving ads on our site. My psychiatrist said I have several crippling mental disorders that require affirmation from internet advertising networks. There's probably a prescription medication designed solely for this.

Things worked out fairly well for the first few months. ValueClick's administrative control panel is incredible, allowing the user to block campaigns on a very detailed, individual basis, which proves remarkably handy when weeding through the myriad of "guess the pope and win a free pope" ads. They also offered a wide range of top-tier advertisers paying relatively decent amounts for ads, a refreshing change of pace from the standard $0.06 CPM (six cents for every 1,000 ads served) we normally receive.

Unfortunately, all good things must come to an end, and that end was a ValueClick representative named "Frederick."

I just left you a message regarding some content found on your site that goes against our Ts & Cs. There are some areas of this site that contain a high amount of profanity and adult imagery. All inappropriate content posted by any user must be removed within 24 hours, which includes user accounts that use profanity and/or adult material.


If these two pages could be removed that would be great, so that we could avoid temporary suspension of your account.

I'm no stranger to the "you have violated our terms of service, prepare to be annihilated, mortal" emails from advertising networks. As far as I can tell, the people who sign us to their advertising networks are immediately fired and exiled to the sun mere nanoseconds after their bosses find out. It's both a blessing and a curse that we run a comedy website, one catering to adults and adult-like manchildren who talk about Harry Potter far too often. It's a curse in the sense that advertising networks, joints run by 80-year old white guys in suits, have absolutely no sense of humor and are simply incapable of grasping concepts such as "parody" and "satire." If it has the word "fuck" in it, it must be evil! On the other hand, running Something Awful is a blessing because... um... well one time my wife and I went to Chili's and the waiter approached me and asked, "hey, are you LOWTAX?" and I said yes, and then he gave me this really awkward wink that you'd use to hit on your dead grandmother.

I failed to burst an artery when I received this email since I've grown resilient to the foreboding advertising network expulsion notice. I didn't create Something Awful for advertiser appeal, and I've never encouraged any of our writers to do the same. We're a comedy website, we try to produce things that are amusing and entertaining, like a clown squeezed to death in a vice press while his wife and child are forced to watch. I'd feel infinitely more shitty offending our viewers with transparent "made for advertisers" content, especially compared to offending our advertising network by using the word "fuck" twice in a sentence. Fuck fuck.