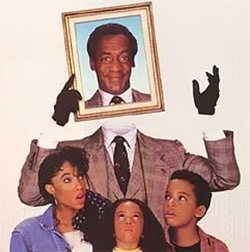 ChodeKING: how did you meet him

Zack: Remember how I was telling you about Ghost Dad?

Zack: He came through the Mellotron just like Ghost Dad.

Zack: He's a cowboy. He's very rugged and no-nonsense, but he's a bit bewildered by the information age. He's also very excitable and it's his birthday.

Zack: Alright, I'm back. I filled a squirt bottle so I can just squirt him with that if he starts acting up again.

ChodeKING: did you tell him happy bday????

Zack: No! We already did his cake and presents. I'm trying to calm him down before bed.

Zack: Look, if you want to clean up cowboy scat and pay for new drapes I'll be happy to get him all worked up over his birthday again. Otherwise, forget it.

ChodeKING: wat presents did yuo get him??

Zack: A William Henry Harrison box kite, a flask of Laudanum, and an iPod Touch preloaded with August Rush and the entire discography of Gary Numan.

Zack: He started crying when he heard "Are 'Friends' Electric?" and we had to take the iPod away from him.

ChodeKING: that sux yo shoulda got him a zune

Zack: Some lessons we learn the hard way, ChodeKING.

ChodeKING: how long have you had him?

Zack: Hang on, he's eating my ficus and the squirt bottle isn't working.

Zack: Sorry about that, he was climbing on the keyboard. I think he really wants to talk to you.

ChodeKING: ill talk to him

Zack: Okay, but whatever you do don't mention his birthday. Even if he brings it up!

ChodeKING: what do i do if he does?

Zack: Just change the subject to something else. Talk about cattledrives or Commanche Indians or something.

ChodeKING: dont kno much about those

Zack: That's okay, he loves to talk about them. Alright, I'm putting him on. He may be a little slow, he's never typed before.

Zack: And he screams if the computer makes a sound or something moves on the screen.