I own 5 guns. That may sound crazy to you but each of my guns in my house has a reason. I am a sport man, I like sports, and I also like to defend myself and collect guns.

Mossberg 12-gauge I use to shoot at deers if they start trying to eat trash I left outside too long. I have also used this to shoot at what I thought was a raccoon but turned out to be somebody from the government called a postman. I was drunk though and I missed and have no trespassing signs up so they should have known.

9mm Glock. This is my main defense weapon. It's pretty cool and I can shoot it really fast. I bought this magazine that sticks way out the bottom and holds like 50 shots and also it has this really flat back on the gun so if you want you can use it to hammer things in. Probably keep it unloaded though when you do that. 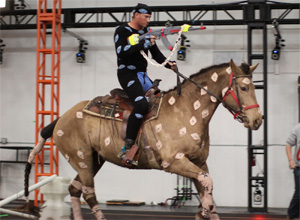 Yeah you liberals will be thanking people like me when the terrorists try to take over wasilla. And I don't mean me because that terrorism charge was for getting drunk and breaking into some people's houses and moving around all their furniture and writing HELTER SKELTER on their wall not actual terrorism I did.Bushmaster 5.56mm. I call this my Call of Duty gun because I taped a laser pointer to the side and hipfire it everywhere and I figured out how to jump and dive into a prone position and shoot it instantly. I will probably use this as my main weapon during the coming race war with the Inuits. It's a good defense gun because there are huge magazines and it allows me to lay waste to a large number of targets. Basically have you seen Assault on Precinct 13? I am ready to take on bad dudes like Ethan Hawke did. Or if the Total Recall robots that Colin Farrel had to fight all get activated and the Breaking Bad guy sends them to kill me. I will go nuts on them.

.22 something. I found this next to a skeleton and a crashed cessna in the woods a few years ago. It still works and is actually a lot of fun to shoot at cars driving by on the highway. Nobody knows it, but I am the Route 3 sniper. Don't freak out on me it's not like I am aiming to shoot people I just want to shoot their gas tanks to make a stream of gas come out so then I can go up and light it and the fire will follow them. Like in the Crow when he makes a crow out of lighter fluid and then lights it. I did that exact same thing for my Eric Draven costume last year on Halloween only it was a penis instead of the raven and it said PENIS underneath it in case it didn't look clear when I lit it. Can't rain all the time but it was raining that night and put the fire out befor it did anything which is probably just as well because I did it outside the police station for when they gave me a parking ticket for when I went to the Walmart and all the handicapped spaces I normally park in were taken so I drove into the garden center and parked there. And then the cop was like "this is illegal parking" and I was like "jesus dude cut me some slack I am fucking drunk as hell" and he did not cut me any slack.

My last gun is I think a .357 magnum. I keep trying to put different bullet sizes in it, but none of them fit right. I might try making a bullet out of an old pen and some firecrackers. I just need to find a pen that is the right size.

These guns are as important to me as my children. Maybe even more important than the children the Palins won't let me see anymore. So when the liberals come for any of my guns they are gonna have to pry them out of my golded hands.

Or they could come while I'm asleep or out shopping or something. I just hope they don't search my truck because that's where I keep my pipe bombs.