They have this wicked screen up behind the stage and when they're not showing shit for a speaker it just shows Republican-themed tarot cards. The Magician is Mike Huckabee's son Chet. The Empress is Nancy Reagan's head on a lion's body. 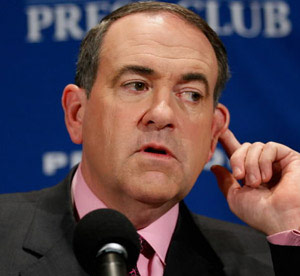 His walnuts are terrible and the dude just makes you want street cart hotdogs.Speaking of Mike Huckabee, he is a giant. Whenever he stands in a photo he stands in the background and they use perspective and a special tilted room to make it look like he is normal size. He admits he is half ogre and he had me sit on his knee so he could feed me walnuts. He smells really strongly like hotdogs.

At about this point I had a freakout over a wine cooler Christine O'Donaldson gave me that she said had her period blood in it and now I was in her coven's blood bond. I ran out of the convention and sought solace in Mrs. Palin, who I heard was staying at the same hotel as all the CNN reporters. Naturally Wolf Blitzer was a wreck from chasing dragons. Dude gets messed the fuck up on the angel dust, running around the halls naked and screaming, chasing candy crowly telling her "I'm gonna open up your ribcage and grimace you!"

So I found mrs. palins room and she is fat as hell. I was like bitch did you go nuts on the chick fil a again god doesn't need you to eat a chicken sandwich. I don't know what happened to her. But she's all in her robe and she's like "come in levi I've been expecting you" and to make a long story short I don't know what happened. I got this feeling like that scene in angel heart where deniro peels an egg with his crazy fingernail and then mrs. palin brought her liberator wedges and crazy oils. 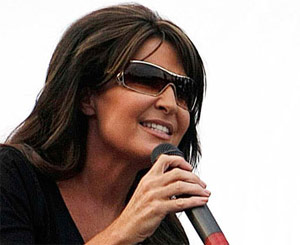 I don't know what she got into but girl was looking huge.Todd Palin that lactonic motherfucker is watching wearing a full snow suit and a helmet with the sun visor down all the time. All he did during the whole time I was doing stuff with mrs. palin was occasionally shake and make this muffled giggling sound. I passed out driving pipe and woke up with claw marks all over my back. Mrs. Palin was still there and she wanted me to use a vaginal ultrasound on her.

"I'm pregnant," she said to me and "the baby is yours" and I started yelling and punching holes in the drywall. I realized Todd was still there, but when I flipped up the visor on his helmet a huge black cloud of smoke came out and started filling the room.

I ran out into the hall and Bristol was there with her new boyfriend Dusty. I told her if he doesn't stop smiling I will do some steven seagal moves and break his arms. He said "hey" and I said "For horses, motherfucker. Just for that I'll break both of your arms." There were crazy Mortal Kombat x-ray zooms as I did a double break on that fuckers arms leaving him with flappy flippers. Bristol was like "Why did we breakup?" and I was like "Where's my sons you harpy???"

I ran through the hotel screaming, busting through japanese screens and into room after room until I was on the set of Fresh Prince. Paul Ryan was there in a pink sweater vest talking about Obama's medicare theft. Mitch Romney was there only he was bald and fat and his eyes kept bugging out and his nostrils kept flaring but he never said anything. Rap music started playing and I heard "woooooooo" from the darkness surrounding studio audience as Piper palin walked in wearing zubas and a backwards bicycler's hat. She threw the severed head of the owl man at my feet and when she talked she spoke with the deathless voice of eternity.

"Your gods cannot stop me," she said. "Time is ending. Your soul will be mine, wendigo."

Everything flashed red as the crowd went nuts and then I opened my eyes and I was in the aiport in Atlanta and I missed my connecting flight to Tampa. So I missed the RNC shit I guess and I might have taken too many ambiens with Russian techno cocaine. My bad.