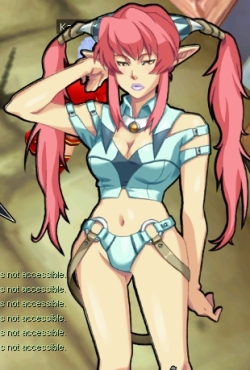 Those darn monsters scared her out of her clothes!The fiesta is an important national pastime for the people of South Korea, so it is no surprise that a MMO would be created in it's honor. Fiesta combines all the well known symbols of it's namesake into a unique experience packed full of androgenous sexes, mushroom houses, and anime dragons. Unlike the previous works of art I've reviewed in the past, Fiesta is the only one to win the coveted "Best game in Asia" award. Hear that, Nintendo? My advice is just pick up your whistle and warp to a different level, or Outspark will dominate you just like they have the Asian market.

Excited by revolutionary MMO elements like slaying dragons and gaining experience I set out on my journey for a closed beta invitation. Luck was on my side since Outspark saw it fit to send every single player 1,000 invites to give their friends; a good choice since the typical MMO player is highly sociable with many connections and good people skills. Using this to my advantage I snagged around 50 invites, enough to retire off of once I sell these hot tickets to some Chinese gold farmers.

I calmed myself and started the game. The joy I felt from playing the best game in Asia lasted only a moment before the ear shattering music took away my hearing. This was but the start of my problems as my client struggled to connect to the server, all the time some asshole dragon breathed fire at me, mocking my inability to fight back. Of course the server could not be reached, and then the game froze. After ending Fiesta's process since there was no way to exit from in game I was delighted to see it forced my resolution to the lowest possible setting. Any normal player would have stopped and uninstalled by now, but I really wanted to see what the best game in Asia had to offer, and after a few more attempts my packets finally made the perilous voyage across the Pacific.

Character creation in Fiesta leaves much to be desired. Presented with a pathetic number of cliché classes I chose the manly sword guy, since it best represented my anger and rage. I crafted the fighter in my image, a male with dead eyes and a blank stare along with fabulous long and silky aqua hair. I was disappointed that I couldn't choose a normal hair color even though the class selection picture had brown hair, but I remembered that I was playing the best game in Asia. If they wanted every character to look like an easter egg then it was obviously the right choice.

Mm, I think I know what class I want to be.

My first few minutes exploring the Fiesta world was one of shock. I decided to ignore looking at screenshots or concept art or anything at all that would give a player an idea of how the game looked, thinking that it would just be a bunch of harmless anime scribbles. For the most part I was right, but I wasn't expecting how angry I would get just because of how things looked. Fiesta suffers from the common problem of everyone looking alike, but the real problem here are the monsters that inhabit this best game in Asia.

Something about monsters drives me mad. I've done extensive testing and have narrowed it down to one thing, the imp's eyes. It's eyes stare past my player and into my soul, uncovering all my failures and shortcomings in life. Then it mocks me with it's harsh words, cutting me more deeply than any critical strike ever could. Not since the nightmarish experience of fishing in Bassin's Black Bass have I been more terrified of a video game. Thankfully Outspark was aware of this, and added in a great feature that pushed me onward to fight when all other reasons were lost.

Monsters in Fiesta never shut the fuck up. Even when defeated they still talk, blabbing away about meaningless topics such as death and my personal life. Since the beginner areas of the best game in Asia are full of slimes, the conversations are dull and boring. Turns out slimes and other fungus don't have much to say other then how slippery they are. Outspark should have noticed this and picked a more charismatic enemy for the low level zones, because slimes don't put any effort into their smalltalk. 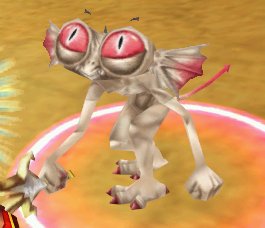 Satisfied by the number of imps slain I headed back towards town to boast about my triumph. Sadly the citizens of Fiesta are all lost in delusions, their minds dedicated to imagining they lived in a world without repulsive slimes running rampant in the forests and were the streets aren't jam packed full of raccoons and mushroom houses. I couldn't help but feel sorry for the town elder, whose brain has been sucked out by the alien parasite attached to his head.

After a few mandatory hug sessions my time with Fiesta was cut short. The closed beta servers went down, but since this is the best game in Asia we're talking about and Outspark knows it, open beta was set to begin the day after. Closed beta was a smashing success and surely they wouldn't rush it into the next step without changing anything. No, it's obvious that nothing needed fixing and the game could ship right now and sell millions, ending the lives of less anticipated MMOs like Warhammer Online and Age of Conan. Either through chance or fate, these lesser games have been spared the chopping block. As of writing this the open beta servers have seemingly disappeared, leaving a huge sombrero shaped hole in the fabric of the internet.

Thanks to the goons of the SomethingAwful forums. Come join us in our next wacky adventure behind the cold bars of PrisonServer.