The previous two weeks were the most painful two weeks in my life. I woke up on Martin Luther King day at 5:30AM in incredible pain which was the result of a kidney stone. On Wednesday I went into surgery and upon waking up it felt as if someone took a bat to my kidney. However, worst of all, I began playing Manga Fighter and no amount of Vicodin could subdue the pain it caused me. 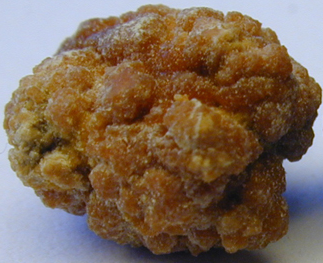 Kidney Stones look as delicious as chicken nuggets.It doesn't take anyone of any considerable intelligence to realize a game called "Manga Fighter" must be a horrible lump of crap. To be fair, it does not hold a candle to The Endless Forest or Tyra's Virtual Studio but regardless, Manga Fighter is one the worst excuses for a MMOFPS that I have ever experienced. I realize that I have not been reviewing "traditional" MMOs for a while and this probably won't be the very last pseudo -MMO I suffer myself to review.

It seems that companies will slap "MMO" on any pile of garbage just to draw fat nerds to it like moths to a bug zapper. Manga Fighter is as much of an MMO as Diablo 2 or worse yet, Guild Wars. When I think of an MMO, I think of a game in which one server can hold thousands of idiots all at once. I do not, on the other hand, think of a chat room connected only by various games with a maximum of 16 players which has reverted MMOs back to nothing but crappy multiplayer games from the mid 90's.

So you may be asking yourself, "Steve 'Khad' Grant, why do you review these games if you don't consider them MMOs? I mean, it is called the MMO Roulette after all!" The reason I am reviewing these abysmal excuses for online gaming is because they market themselves as Massively Multiplayer Online Games. Since they aren't actually MMOs, that makes them really bad MMOs, which is what I review so shut up and just wade through all of this text to get to the video. Now that I have wasted two paragraphs on ranting let me get to why Manga Fighter is a horrible pile of filth. 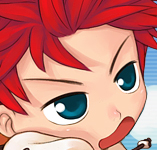 Even the characters are pretty apathetic about this game.Very little of this game has anything to do with Manga as it's name implies... I think. I always thought manga equated to Japanese comic books in which characters with big eyes are molested by some kind of demon or another. In fact, I am not sure if you can give Manga the esteemed title of "comic book" as real comic books involve some kind of super hero that shoots razor blades laced with HIV out his eyes. Either way, Manga Fighter does not pit horrible Japanese comics against each other in a battle of the death. Instead, I was able to pick from a wide array of four characters being: A giant bear, a little girl, a little boy, or a walking IPod.

Manga Fighter employs the stupidly popular "over the shoulder shooter" mechanic which drives me absolutely ape shit. One and only one kind of shooter exists and that shooter uses the rightful first person camera for maximum killing accuracy. That actually brings me to another point; this game is marketed toward and mostly caters kids around the age of twelve. I am sure a few older folks play this game to gain some kind of self gratification of shooting children in the face (I know I did) but mostly this game is for kids. I don't know kids that well but I am pretty sure that nothing says "children's game" like unloading a full clip of hot lead into the face of a eight your old girl. 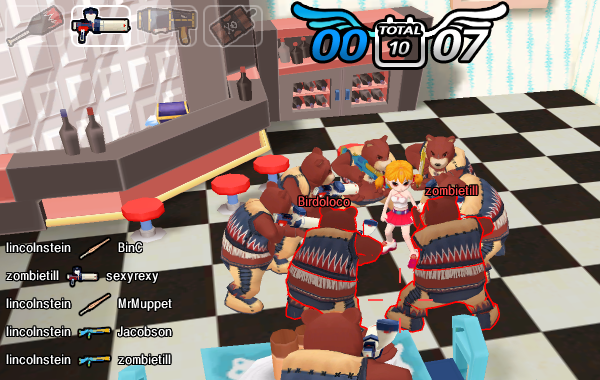 Well I'll be damned! This is a manga after all.