Normally I review games of the MMORPG genre every two weeks but this article is a bit different since I am reviewing "The Endless Forest" which I don't think actually qualifies as a game. I would call it a chat room for people who want to be deer... but you can't actually chat. No words can really describe The Endless Forest, though some words can come close: "crap", "strange", "bizarre", "garbage", perhaps even "nightmare inducing horror." However, none of these words can really do justice to what I am about to show you. 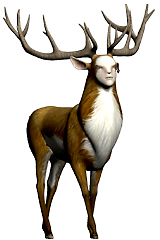 This is the face of horror.The Endless Forest feels abandoned but for some reason the website, server, and forum still exist. From what I can tell, the last update made to the website happened in 2005 as it hints to a 2006 upgrade to make The Endless Forest more than wandering aimlessly as a mutated human-deer, looking for a tree to rub against. Probably out of laziness, the update never came and The Endless Forest never actually made it to game status. I didn't dig deeper to find out about the update but I stopped caring once I saw the screenshots of deer with human faces.

You can register a name (that no one ever sees) to get a pictograph above your head thus making you a fawn upon logging in. In order to ascend into deer adulthood you must play for a month. Your deer can do a variety of things such as rubbing against a tree, eating moss from a tree, dancing, sniffing other deer, and most importantly, mooing.

Much like Drift City the Goon Ckrew™ made it their goal to annoy the hell out of all the people that took the "game" seriously. Forum and Goon Ckrew™ member Kal wrote a script capable of making his computer click on the moo icon all day long. After doing so, he generously shared the script with the rest of the goons and for the first time, The Endless Forest community had something to do: figure out how to shut us up.

Now before you become irate with the idea that we just go out and troll people for fun, let me explain why this needed to be done: these people are absolutely crazy. Yes I know the internet houses millions of people that are bonkers but the people who call themselves "Deers United" are not only furries but actually enjoy this game. Why is that so crazy? For starters, there is absolutely nothing to do in this game. Sure you can frolic and drink water from a pond and run around in a graphically inept forest, but that's it-- I am dead serious, that is the entire game.

You can't even chat with people in some stupid secret deer language. The only means of communication include mooing or sniffing each other's virtual deer butt holes. Somehow these people actually enjoy doing this every day for hours on end. Life must be great, waking up Saturday morning, taking a deep breath of stale air from the basement, and exclaiming, "It is that time again! Time to be a deer!" Another annoying trait of the "Deers United" is the fact that every single one of them refers to themselves in the third person. They basically admit they play this horrible game but refuse to actually believe it so they pretend they are talking about their deer and not themselves.

Now that you know our actions are justified, let the fun begin! 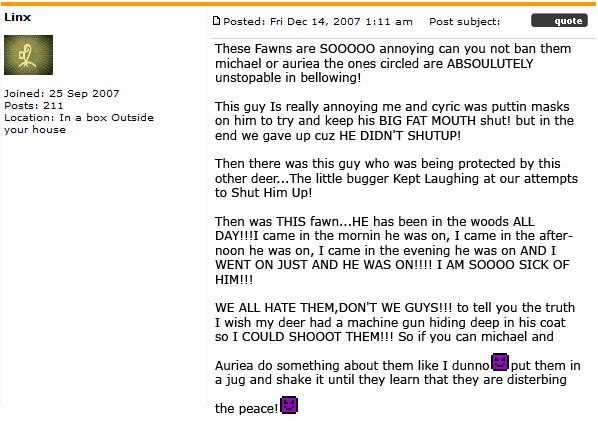 This is what happens when you rub against the fur.

Almost immediately we were able to get under their skin... or fur... whatever. Before long their forum activity was not about who snuggled against who and who yiffed what, it was about what they deemed "The penis fawns" (that's us). The "Deers United" tried everything from putting in-game silence masks on us to trying to muffle our painful cries with their assholes. Nothing seemed to work as Kal continued to modify the script to get around any thing the community tried. 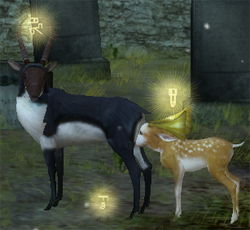 Business as usual in The Endless ForestTheir forums filled with outcry of something to be done; some said "Ban them!" others, "Ignore them!" Though they seemed to agree on either point, none followed through and finally, the developers of the game decided that this was a big enough problem to actually work on. Sure, this isn't a giant game like World of Warcraft, but for the first time the developers of an MMO created a game patch to deal with our activities. In an attempt to keep us quiet, the patch muffled the sound of mooing if used continuously and basically possessed a six second cool down. However, it appears they did not think that if someone waits for more than six seconds, the mooing sound would be just as loud as ever. Kal got to work and in an hour a new script was written that would put in a time delay. With several "Penis Fawns" screaming at different times it made no difference that a six second delay existed.

Eventually the administrators/developers, who have a gigantic god complex, bothered themselves to enter the forest. In some attempt to scare us off they basically ended the world. That is right -- they ended the endless forest with a credit roll and everything. Fireworks, crappy lightning bolts, and cages rained from above along with cryptic misspelled text, undoubtedly stolen from some anime. When it was all said and done two words were all that was left in the forest.

We managed to end an endless forest.