Each week I partake on an adventure into the hell of gaming: MMORPGs. If a boring ring of hell abundant with horrible graphics and an annoying urchin grasping your leg exists, it would be Knight Online World. My time in Knight Online World consisted of killing slugs, bandicoots, and even a little bit of myself. With possibly the worst online community, Knight Online World is not only a horrible game, but makes the Gamefaqs community look like Mensa. 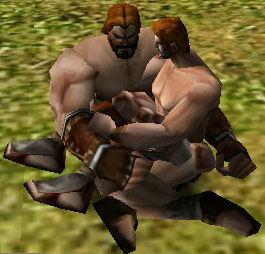 Slybo held me with his gentle arms in attempt to comfort me from the horrors of Knight Online World. With the "click and wait" attack mode of Goonzu, the horrible graphics (sans anime) and giant slugs of Gekkeiju Online, a community that makes Ran Online's look sophisticated and intelligent and the boringness of Dofus, Knight Online World is pretty much my worst nightmare.

Knight Online World posseses the worst character creation options in the history of gaming. The wide selection of three faces and three hair styles left me no chance of being a unique flower in a sea of clones.

After crashing a few times trying to finalize my character, I finally managed to enter the game! As a change of pace, a team of goons accompanied me but before getting together as a group, I decided to go at it solo and see what this game would be like to a new player. Before I could actually play, however, I sat through a long "cinematic" which consisted of text slowly being typed onto a poorly drawn background. Unable to skip the most boring cut scene in gaming history, I decided to make a sandwich and by the time I returned the cinematic continued to draw on.

Finally when the cinematic finished, a cluttered interface designed to give me the least amount of viewable space possible greeted me. Upon clicking around on the interface, I noticed a question mark begging to be violated. Immediatly a picture of a crying little girl babbling about, "a human eaten by worms" exploded onto my screen. She begged me to find this mystery person and I blindly obliged to what I could later describe as my biggest mistake. 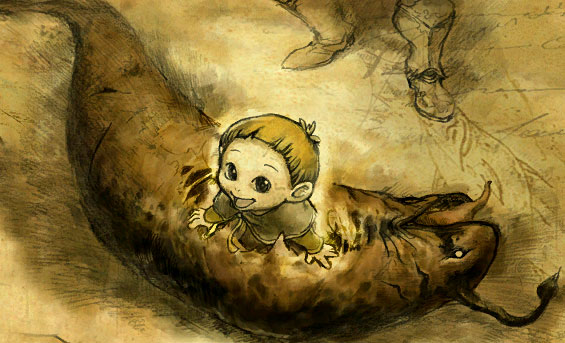 That creature wouldn't be the last thing this kid would cause pain to.

Eventually I found a colony of worms brutally slaughtered by a horde of other players. Somehow this game appealed to enough people that killing a single slug almost neared impossibility.

After finally killing a slug, another image ruined game immersion (yeah right) and a kid named Max crawled out unharmed. In hindsight cutting deeper into the slug to make sure this little pig died too would have been a much wiser decision. Whoever wrote this game's quest dialog is probably an absolute sadist. Swallowed by a giant slug and undoubtedly will suffer mental anguish as a result for the rest of his life, Max seemed somewhat ungrateful for his rescue. Consequently, the only options available to me included hitting, beating, or pummeling him to death after he survived almost being eaten alive. 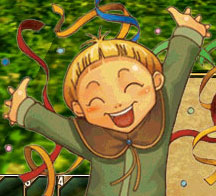 He may look pretty happy but I would be happier if he WERE DEAD. I believe I found a bug in this game due to my failure in successfully bludgeoning Max into the afterlife with my fists. The remaining time I played Knight Online World, Max did his best to annoy the everliving hell out of me by projecting himself onto my screen and telling me what to do every five minutes. When he wasn't on the screen, he would leap up with some reaction depending on if I typed "haha" or "shit".

Max spewed invaluable tips such as "master... don't blow your top" and "honorable knights do not swear!" In case you didn't have enough of the Max Experience™, fear not for he had his own button on the interface. I could honestly write this entire article on my hate for the virtual pest. However, the game had so many other bad spots that I couldn't neglect from the four people that read my articles I must move on.