Hello journal! My therapist told me to write in you to help me overcome the "sickness" I experienced. I am not sure what writing down my daily thoughts into a book (which is obviously not a person) is going to accomplish, but he is the "doctor" around here! He also told me to try and live with others and set me up with some people looking for another roommate in a town called Simville. I think that is a very bizarre name for a town but I looked it up on the internet and things seem to check out! I am pretty excited to meet my roommates and hope they like me!

I arrived to my new home an hour ago but it seems that my roommates are a bit paranoid and keep the house locked pretty tight. So tight that the key my therapist gave me doesn't even work! I guess they changed the locks just a couple a days ago -- talk about bad timing!

Anyhow, I figure they will let me in soon as I can see one of them looking at me through the windows. I know they are just trying to be careful but it is raining pretty hard out here and I have had pneumonia before so I don't want to repeat that! Oh well! Like they say, "When the tough gets going, get going tougher!"

Great news! I now have a job as the local paperboy for Simville! The hours seem really long for a paper boy job though, I mean... why do I need to be delivering papers from 5AM until 5PM? I guess it wouldn't be so bad if the job paid more than three simoleans an hour but I guess beggars can't be choosers, right journal?

I ended up climbing into an open window yesterday to get in and it seems like someone just left a bunch of thumb tacks under the window. I am sure it is just a coincidence but seems pretty suspicions since my two new roommates found it hilarious. After I plucked the tacks out of my arms and legs, I tried to get to know my roommates better. The one I "talked" to was named Joe and during our conversation he would only poke me in the chest. I think he has some kind of mental disorder so I don't think too lowly of him as that would not be very nice of me! 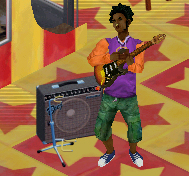 I really wish they would stop playing!I know my therapist says that I need to control my anger and appreciate others but this is becoming quite a challenge.

I think this is some kind of that fancy pants exposure therapy that I read about on the internet. Both of them recently purchased electric guitars and put them above my room. They have not quit playing those damn (excuse my language) guitars for two days straight! How are they still awake after all of that time!?

I guess I will just stay up again and deliver the papers with my good friend coffee... ha ha ha! I am sure Joe and his friend will crash pretty soon and then I can get some well deserved rest. 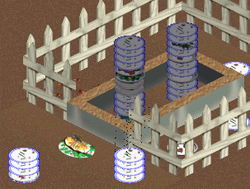 My roommates refuse to do dishes.These two are driving me crazy and I am all out of my prescription medicine. I met the other roommate, a black fellow named Jay, yesterday and ever since then he won't stop winking at me while calling me his "little puddin' pop." He somehow creeps me out more than Joe and the two of them have been urinating all over the house.

Joe and Jay call each other "goons" and keep talking about stairs and robots. It is quite confusing and though they think eating all the food in the fridge while defecating on the carpet is hilarious, I don't think I appreciate their humor. Up until this point I was coasting on meds but as the medicine wears off I am receiving those old... familiar feelings again. Help me journal.