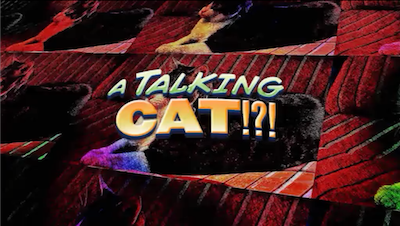 Overview: Two families of dweebs, spazzes, and other assorted degenerates are brought together by their mutual annoyance with a cat who can talk, except it can only talk to any person once, because that's the rule.

The Case For: Provides the missing evidence you need to finish your angry manifesto about how cats will be responsible for the downfall of human society. 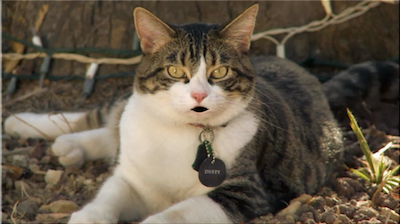 Hydrogen: Yes, that's right, A Talking Cat!?!, a movie so bad that its own title is incredulous that such a film could ever exist. Don't be fooled by the sense of wonder and amazement that title is trying desperately to convey, because this movie has neither.

Trillaphon: OK, so which rotten soulless son of a bitch suggested we watch this movie again?

Trillaphon: I know who I'm saving my next Jihad for.

Hydrogen: Good, that leaves David DeCoteau for me then.

Trillaphon: That guy is pretty much the Canadian Charlie Band. Speaking of talentless hacks, I wonder who was holding Eric Roberts' voodoo doll's crotch over the fire to get/keep him in on this?

Hydrogen: He probably didn't even know he was in it; he signs movie contracts like blue whales eat krill.

Trillaphon: Noisily and at depths of over 100m?

Hydrogen: Sure, why not. Or maybe he's just the world's greatest multitasker and banged this out between takes on the 12 other movies he was doing that day.

Trillaphon: That would explain why it sounds like he's reading his lines into Batman's armpit.

Hydrogen: It's all so clear now.