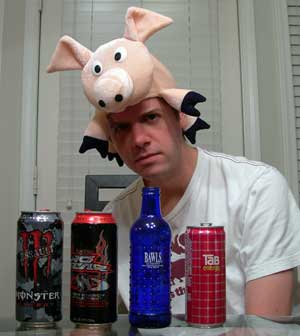 A few years ago I took on "the man" and decided to buy a random assortment of energy drinks, critically reviewing every aspect of them with a microscope, despite the fact that microscopes reveal virtually nothing about energy drinks except possibly the fact that they look much larger under one. Perhaps Sharper Image sells a microscope specifically designed for energy drink reviews, one that comes with a built-in iPod sound dock and ionizer which just spews ions out in every crazy direction. Unfortunately, companies continue to produce energy drinks, which means I must continue to consume them in the name of science and tax write offs. Next week I'll be reviewing a summer house in Florida and a Porsche Carrera GT, neither of which I'll be able to drink, no matter how hard I try. Until then, please enjoy today's fact filled and productive update crammed full of taurine, caffeine, and ginseng, as I review TaB Energy, BAWLS GUARANA, SOBE NO FEAR, and MONSTER ENERGY ASSAULT, a collection of drinks so hardcore and fierce that they can only be described BY USING ALL CAPITAL LETTERS. 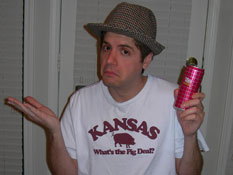 Stare into the bottomless abysss of the TaB inferno.

THE DESCRIPTION: Coca-Cola introduced TaB soda in 1963 as the world's first sugar-free beverage, although many astute scholars and scientists argue TaB was beaten to the market by similar, more popular drinks such as "a tree stump dissolved by hydrogen fluoride" and "sucking on a cylinder head from a 1983 GMC van used to haul illegal immigrants across the Mexican border." One of TaB's main stumbling blocks, besides resembling a giant and highly uncomfortable TaMpon, revolved around its heinous and terribly artificial taste, which tasted like French kissing a grandfather clock. I'm not sure why they decided to capitalize the "b" in "TaB," perhaps the correct pronunciation is "tah-bee" which sounds a lot like "tubby" and accurately describes the people who actually drink TaB.

While the concept of a sugar-free soda may have seemed like a positively revolutionary idea to folks in the 1960s, the idea of ingesting a liquid so disgustingly corrosive that it actually possesses the ability to vaporize all your teeth, then travel back in time and dissolve your baby teeth before they have a chance to fall out, didn't exactly resonate with the American public. Perhaps some of the backlash could've been avoided if Coca-Cola decided upon a different name for their product, one which didn't look like a failed chemistry formula. Maybe all the "hip" kids in the 1960s spent their free time skipping class and searching relentlessly for sugar-free sodas. Then they'd race cars and get into street gang rumbles, which involved a lot of catchy songs and people snapping their fingers to the beat while some girl with blonde hair and a poodle skirt sipped on a tantalum-boron malt.

Well good news, folks! TaB is back and better than ever! Coca-Cola, realizing the destructive void they created by pulling the most revolting mass-marketed drink from the shelves, shrewdly elected to rebrand TaB as "TaB Energy," and funnel some hip new vile concoction into a generic slim can adorned by a festive decoration which makes you physically nauseous if you mistakenly look at it with your eyes or any other part of your body. The can's pattern looks exactly like one of those images you get emailed from your mom with the subject line "FWD: FWD: FWD: RE: RE: FWD: CHECK OUT THIS CRAZY OPTICAL ILLUSION" and ends with the text "FORWARD THIS MESSAGE TO 50,000 PEOPLE AND U WILL FIND A HOT BOYFRIEND!!!! GOD BLESS YOU RORY GILMORE AND PLZ FIND THE STRENGTH TO DUMP LOGAN!!!!!"

THE TASTE: A combination of cheap, dusty perfume discovered in an attic and stale Valentine's Day candy crammed into a hobo's pocket for six days, which he spent sleeping under a bridge overpass and engaging in casual conversation with neighboring concrete pillars. I partially expected to choke while drinking it and spit up a giant pink heart with the phrase "BETTER LUCK NEXT TIME" stenciled across.

NOTABLE INGREDIENTS: Like all energy drinks, TaB energy contains obscene amounts of taurine and caffeine to completely ensure you feel like energetic scummy filth after your first sip. TaB energy also lists vegetable juice and ginseng, which is very popular with short elderly Asian women who appear to get very furious in public locations for absolutely no good reason.

PROS: Relatively speaking, it didn't taste exactly like swallowing knives, which is a big positive for me. The drink itself was clear and somewhat pink, so if you're ever drinking this while driving down a bumpy road and you splash some across your white shirt, you can easily dismiss the stain to people by saying, "oh, a bird must've had its period on me."
CONS: The can itself has been designed by the guy who created the painting of Vigo Von Homburg Deutschendorf in "Ghostbusters 2." If you look at it long enough, I'm fairly certain Pinhead will emerge from the can and grant you three wishes, as long as those wishes involve being tormented in hell for all eternity by terrible CG effects.
RATING: 7 / 10