The Second Mother and Second Kid get back on their ill-gotten steed and trot off into the distance. Suddenly, they stop, as if they heard a loud and threatening noise. Unfortunately, due to shoddy sound editing, the noise actually comes after their reaction to it. Still, it's a gunshot, and at the prospect of something actually happening in this movie, I can forgive a little broken continuity. We see a close-up of the masked gunman crouched behind some cover. Moreover, we see a close-up of his gun as he fires at the mother and son, which only serves to emphasize how we can hear the gunshot, but nothing actually comes out of the gun. Now, typically, if you're on a small budget and have to use crappy prop guns and don't have anything to use for muzzle flashes, you would position your shots so that the audience doesn't see an extreme close-up of the impotent weaponry at work. This is just another way that Jon Sorensen proves himself to be a renegade. It's a wonder that Hollywood hasn't come down with a severe case of Sorensen fever since 1999. Oh well, I'm sure his time will come.

Now, despite the camera time devoted to that first gunman, he doesn't actually accomplish anything. Neither does a second masked gunman, who sneaks up behind Second Mother and Second Kid, then decides to reveal himself and attack them at close range for some reason. He is quickly subdued by the Second Kid. That has to be embarrassing for the gunman. Also embarrassing is the fact that every time the gunman gets hit, he grunts in exactly the same way, like a bad guy in an Eighties video game. 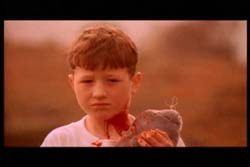 I only hope that if I ever get shot, I can react with this kind of stoic squinting.A third gunman, having watched his brothers fail miserably, finally gets the bright idea of sneaking up on them and shooting them. That's what we call ingenuity! He puts four or five shots into Second Kid, who looks annoyed at having so much blood on him (ooh, alien blood!) than anything. Still, appropriate reaction or not, Second Kid dies. Second Mother dispatches the third gunman, she then lifts the body of her dead child and screams. Ah, so that scene at the beginning was a premonition! Interesting! Still doesn't matter, of course. I mean, the kid's name was Second Kid, you can't expect this to actually have a profound influence on the plot. 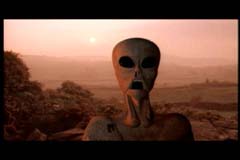 Yikes. Just... yikes.Influential or not, Second Mother's grief is so extreme that she morphs into a crappy CG alien. Now, I've been pretty bummed before, but never so bad that I turned into a crappy CG alien, so she must be pretty torn up. If the crappiness of the graphics is an indication of the level of her grief, then she might just be the saddest alien alive. While she howls away, Mom and Kid materialize beside her. One might wonder why, if they could just materialize there, they didn't do earlier to lend a hand when Second Mother was under attack. One might also wonder why, if these people can teleport, they need to constantly walk, drive, and gallop across the countryside all the time? One would be better off not asking so many damn questions and just marveling at the fact that someone who worked for Jim Henson could possibly think that this horrible CG alien was acceptable in his movie. 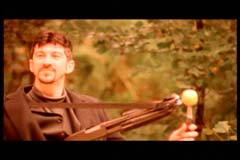 Jewboy is so evil, stabbing an apple just isn't enough for him. He has to shoot it, too. Bad. Ass.Elsewhere in the woods, a whole squad of gunmen stand around being yelled at by the film's real villain. He says his name - and I swear I'm being as accurate as I can, here - is Michael Jewboy. We know Jewboy is evil (no, not because he's a Jew. Give me some credit) because he has kickass sideburns, a goatee, and a big knife. He berates the gunmen for not being able to find and capture Mom, despite the fact that she's on foot, has no food, is traveling with a small child, and is pregnant. Honestly, these are all valid points, and he has my thanks for making them. He then expresses his great displeasure by killing one of the gunmen. I see his reasoning. Clearly, the gunmen couldn't capture Mom because there were too many of them. Works for me!

Mom and Kid stop by a pond in the middle of the woods. On the other side of the pond, a juggler practices his craft for some reason. Unfortunately, he has juggled his last, as he is shot by Michael Jewboy. Jewboy steps out of the shadows to admire his handiwork, but doesn't notice Mom and Kid are across the pond until they're gone, which pretty much skews my whole perception of the scene. I had originally thought that he shot the juggler to make a dramatic entrance before his showdown with Mom and Kid. Evidently, though, he didn't even know they were there, which means he just happened to be at the same pond and killed the juggler because, I don't know, a juggler killed his parents or something. Damn, Jewboy, that's cold.

You might be thinking to yourself, "You know, this Mom character is dragging her kid through the wilderness with minimal food and seems to have a habit of beating people to death. That is pretty lousy parenting." Well, it's about to get a whole lot lousier. Never mind that there are armed men on her trail. Never mind that her kid is starving and cold. Never mind that she's goddamn pregnant. Mom stops in the middle of nowhere to peer into the window of some random house and watch two naked women slowly help each other get dressed. I'm not sure what this scene is supposed to tell us. Perhaps that Mom has an aching loneliness and wishes she had some intimate human contact. Alternately, perhaps watching these two women dress each other just makes Mom wish she knew how to take off her sunglasses. 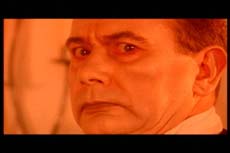 This is James. He's grumpy because he has no bearing on the plot.These women, as it turns out, are actually our introduction into Alien Blood's second plotline. I'd love to explain this plotline to you, but despite having watched this movie from start to finish multiple times, I still have no idea what it's about. There's a big house populated with annoying people who are also vampires, or think they're vampires, or are dressed as vampires for some sort of New Year's Eve vampire party - I don't know, maybe it's a British thing. All I can tell you for certain is that the master of the house is some goofy-looking fat guy named James who seems to be sleeping with everyone in the house except his wife, and the rest of the house is populated with women - one of whom may be psychic - and one other guy, who for some reason is played by the same sideburny actor who plays Jewboy. At some point, James locks his wife - I've named her Wifey - in a room, presumably so that he can more freely attempt to sleep with all of his houseguests. Beyond that, I'm at a loss. Believe me, though, while it's nice to finally have a stretch of film where people actually speak, nothing that any of these characters do matters in the least.

Eventually, these bizarre wannabe vampires are forced into relevance when Mom breaks into the house and kills James. Mom and Kid corner everybody in one room (except for Wifey, who is still locked in a room of her own). The psychic lady attempts to mediate the situation, prompting Mom and Kid to speak. Turns out they're French! Just to clarify, we're fifty minutes into the movie, and we only now learn that the main characters are fucking French. Here's a note for Jon Sorensen for any future moviemaking endeavors: it's a little tricky for the audience to relate to your protagonists when more than half the movie goes by before we even learn if they speak English. Just something to bear in mind. 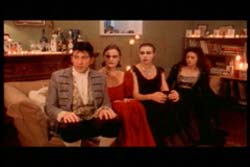 Yeah, I don't know. The psychic lady enlists one of the other vampire women to help translate, as she is the only one who knows French. The conversation goes back and forth for a while - the psychic asks a question, the other woman translates into French, Mom gives a vague, unhelpful answer, the woman translates it back into English. Then, Mom just starts speaking in English, which speeds things up. Don't get me wrong, I'm glad to have things moving a little faster, but would it have been so hard for her to speak English from the beginning? Man, alien moms suck.