Anyway, Mom tells the vampire people that there are men after her and her kid. Sure enough, moments later, a gunman bursts into the room. Despite having his laser sight trained on Mom and spraying her with semiautomatic fire at close range, he doesn't hit her, or, from the looks of things, anything else in the room. Mom doesn't even bother trying to protect herself or her child. She knows this guy can't hit anything. She, however, shoots him with ease, then goes outside and kills five more of them, who were evidently just hanging around, waiting for someone to hurry up and kill them. This scene uses Eighties Action Movie Physics, meaning that the bad guys, despite their extensive training, are all horrible shots, whereas Mom has perfect aim and unlimited ammo.

When one of the bad guys actually manages to get the drop on Mom, Wifey, who is still locked in her room, shoots him through the window with a gun she found. Never mind that she has been locked away this entire time and doesn't have the slightest idea what's going on. She's still perfectly willing to involve herself in a firefight against an unknown number of heavily armed assailants in order to help a mystery woman who just broke into her house and killed her husband for no reason. Her assistance elicits a smile from Mom, but the one remaining living gunman uses the momentary distraction to stick a knife in Mom's belly. This just makes Mom mad - so mad that she actually takes off her sunglasses and headbutts the guy to death. I didn't think anything could make her take off her sunglasses, but evidently stabbing her in her pregnant belly is one of her buttons. 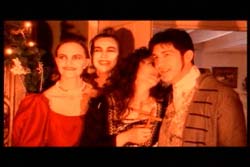 "Tee hee! We're vampires, or something!"Mom returns inside, the knife still sticking out of her. She then does what any of us would do in that situation and pulls her own heart out. Not the knife, mind you, her heart. Okay, I realize she's an alien, but, um, what? Not only is her kid not in the least bit phased by seeing her mother rip her own still-beating heart out, but neither is anyone else, except for Sideburny Guy, and he gets over it pretty quick. Instead of freaking out, the vampire-esque women decide to help out and arm themselves with the weapons gathered from the dead gunmen. Soon, more gunmen show up, and we've got a real firefight on our hands. Naturally, the gunmen are still terrible shots, and all of the women are like goddamn snipers. Sideburny Guy, however, does not stick around for the fight. He hightails it out of there. Sadly, he is soon shot and killed by himself - I mean, by Jewboy. As Jewboy stands over Sideburny Guy's body, he remarks, "Goodbye, little brother." That's right, both of these characters were played by the same person because they were supposed to be brothers. Note how that has absolutely no bearing on the plot whatsoever. I'm sure it has nothing to do with Jon Sorensen being short on male actors who can remember lines. Nope, nothing at all.

One of the gunmen makes it into the house and corners Kid in a hallway, but Kid busts out some freaky alien powers and makes him puke up his guts by staring at him. I'd say this is a power that might have come in handy earlier, but honestly, Mom and Kid have been doing alright without it. Second Mother and Second Kid might have wanted to bust out that trick, but, hey, whatever. This is really no time to start looking for this movie to hold itself to any sort of logic.

Closing in on the house, Jewboy kills one of the women. See, he's a main character, so he can actually shoot. He's about to enter the house when suddenly the clock strikes midnight. The whole movie has been leading up to this moment. What happens when the clock strikes twelve? 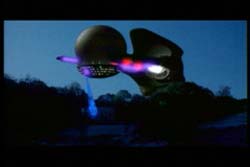 All aboard the Starship Epcot.The answer, I'm sorry to say, is a big CG spaceship appears out of nowhere and starts shooting lens flares and clipart at the gunmen. If the CG alien from earlier was bad, this is just a catastrophe. It's no wonder that no one seems particularly bothered by the appearance of this giant ship. It looks like a giant, poorly-animated cat toy. Totally undaunted, Jewboy goes into the house and finds Mom. At last, he has her. She's finally out of ammo and he has a shotgun pointed right at her. The day belongs to Jewboy. Does he shoot her? No way. Does he make her come with him? Not a chance. Does he stand there in complete silence while the spaceship slowly picks off his remaining men? Ding ding ding! We have a winner!

After the last of the nameless gunmen are dead, two women teleport into the house from the spaceship. Only then does Jewboy finally shoot Mom. Then, the women use their crazy alien powers to make him shoot himself. Or something. I don't really know or care. The two women take Kid away aboard the spaceship, which then fades back to wherever shitty graphics go when they're not being forced on innocent movie audiences. With her last ounce of strength, Mom looks at Wifey - who apparently got out of her locked room at some point - and pats her belly. Wifey, who has never actually met Mom, nods knowingly.

We leap forward an undisclosed amount of time. Wifey and the other surviving women stand beside a pond, throwing stones into the water. Beside them is a little girl who looks exactly like Kid. Yep, although Mom took both a hunting knife and a point blank shotgun blast to the belly, her unborn child survived. I guess Wifey cut it out of her cold, dead alien body and raised it as her own. Anyone woman would do the same for some crazy stranger who killed her husband and prompted the death of several of her friends. As the screen fades to black, no questions are answered, but one thing is certain: that little girl - child of an alien from an unknown planet, possessing untold powers, torn from her dying mother's womb by a random woman who dresses like a vampire - is going to need some major therapy.

It bears mentioning that the version of Alien Blood that I watched was actually the director's cut. This, of course, raises some questions, such as: why did they feel this movie needed a director's cut? Was the original version not confusing enough? Did Jon Sorensen feel a burning need to add more vampires? Maybe he thought the CG needed some fine tuning for that authentic "made by a five year old" feel. Honestly, if this is the cut where Jon Sorensen felt his voice finally came across, the man needs a freaking muzzle. The first half of this movie is virtually devoid of dialogue, and when people finally do start talking, it only gets more confusing. For the record, I do know all the characters' names, having read the credits, but barring that, there'd be no way to identify any of them, except for Michael Jewboy. There is actually a moment, shortly after Mom and Kid break into the vampire house, when everyone is formally introduced, but the sound is so awful that the names are entirely lost. I actually thought the mother and daughter were named "Illid and Rick." Turns out it's Helene and Monique. Of course, considering the other characters have names like "Lecherous Farmer" and "Gum Chewer," the names may not be that important. It's not like they help this movie make more sense.

The real victims of this movie are the children. Kid and Second Kid were young when this was shot, young enough to not recognize Jon Sorensen for the maniacal crackpot he is. The adults in this movie had a choice - they chose to appear in a half-silent movie that is somewhat about aliens and has some sort of vampire-related subplot. The kids didn't know what they were getting into. Now I'll bet they have deep-seated emotional problems. Worse yet, they probably think it's okay to take those emotional problems and make a terrible movie about them, full of bad effects and lame vampire plots. Sooner or later, I'm going to have to review their movies, and then the circle will be complete. Congratulations, Jon Sorensen, you've ruined a generation.