Cooling Off From the Summer Heat! 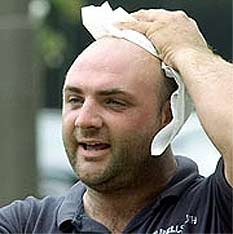 Here's a picture of a guy who is hot to illustrate my point that; HOT.By golly folks we've had some crazy dad-burned weather lately! Snow one minute, then in the next minute it is ninety degrees and your ghost-pale skin is bubbling like cheese on a pizza. It's so hot and sunny I can't store my records on the dash of my car anymore and there just is not room in the crawlspace for all that vinyl. I'm not afraid to tell you that when the mercury rises above about fifty-degrees Fahrenheit I start to sweat like a glass of iced tea in a broiler. Naturally there are ways for a man about town such as myself to beat away the fresh advances of dirty old man heat; air-conditioning, waving palm fronds, Japanese fans, laying in the freezer, smoking crack-cocaine, etc. This doesn't help all of the fine ladies out there though, they have what I like to call a "heat gland" and no-matter how much Freon you blow up their skirt they're still going to be hotter than a sauna rock in a volcano.

For you people in the North East things have been especially scorching, with temperatures getting up to 150 degrees with the wind chill factor. I'm not afraid to say that is hotter than that episode of "Magnum PI" where Magnum had the flashback to Vietnam when he and T.C. were trapped in a sweat box in a POW camp and Magnum had to suck death adder poison out of his thigh with a bamboo shaft. It has been hot enough to fry an egg on a chin strap! That's the key right there to women beating the heat, the secret of what I earlier referred to as their "heat gland". What's the physiological difference between men and women? I don't mean an overabundance of sass, that's not physiological, I'm referring to their reproductive system; their consarned eggs FRY in this heat. It makes it positively impossible for them to catch a break in Death Valley.

Until now! Ladies, I am your number one fan, and I'm always on the lookout for a method to make your lives easier and, by getting you to be a little less crabby, make the lives of your male breadwinner a little easier. I have combined my philanthropy with my intensive knowledge of media and I have conducted a detailed survey on how innovative women around the globe are beating the heat. From Afghanistan to Australia, America to Argentina, ladies are using one time-tested method to escape the hottest days of summer. This has passed under the radar of health experts, summer vacation planners, gynecologists, sports-medicine experts, and website humorists for decades, but I'm about to change all that.

I know, I'm building the tension up on this amazing discovery, but let me tantalize you with a hint. What kind of egg will not fry? What type of egg have you never seen fried? Ostrich? No, there's this weird Cambodian restaurant or something in Toledo that serves ostrich eggs. Coyote eggs? No, coyotes don't lay eggs, but you're getting close because they frequently thrive in arid climates. The answer is fertilized eggs, you may have seen one crop up in your dozen eggs from the grocery store and did you crack it open and toss it in the frying pan? No, you threw it in the garbage, and you felt relieved and refreshed to be rid of it.

Since ladies are generally much more scatter-brained and illogical than guys are I've put together a very simple step-by-step guide to cooling down.

Women contain one large egg about the size of a baseball, unlike a chicken or a buzzard or a fish that can contain up to 50,000 eggs at any one time. The egg is coated in a thick wall called a "shell" which a man's sperm must penetrate in order to fertilize the embryo inside the egg. The embryo is like a blank human template, much of it is determined by the mother's blood cells (also called DNA) while the rest, such as the sex, hair color, and level are determined by the male reproductive fluids. These fluids enter the egg by breaking through the shell and then cling to the embryo until it "powers up" and absorb their energy.

Actually becoming fertilized can be easy for some women who have particular thin shells on their eggs and difficult for other women who eat a lot of eggs thus causing their own eggs to grow thicker shells. The easiest way to ensure fertilization is to have a friend or loved one punch you repeatedly in the uterus, this will cause the shell to crack. You have to be quick to have sex after this or the embryo will leak out of the shell before it has a chance to be fertilized.

Fertilization occurs during sexual intercourse. The woman should lay on her back and close her eyes, it may hurt but if you are sexy it will be over very quickly and the man will dump his sperm cells into you through a gland in the tip of his "penis" called a "urethra". Make sure you are doing this part right or the man might become confused and pee into your egg instead of dumping sperm into your egg and then you won't have a baby you will have a full bladder!

Being pregnant is a happy time for any woman. As the baby hatches inside her from the shell it will begin to give her increased strength and it will heighten her senses to a degree that no man will ever match. Her ankles will begin to swell up with muscles and she will wake up in the morning refreshed and ready to take care of the day's business of cooking, cleaning, and making herself look presentable for her breadwinner. Pregnancy generally lasts four to five months if you are following your doctor's prescription for smoking crack cocaine, if you are lazy then it might take as long as nine months to a year. If you wait that long to have your baby birth will be very uncomfortable and the baby might not just slide out like it's supposed to. After eight months you may begin to experience a medical condition known as "contractions", this is caused by the baby inside of you overpowering your muscle control and attempting to pilot you like a giant robot or "mech". Unless you are mounting laser cannons and missile pods these contractions should pass with little harm done.

Step 3: Give Birth to the Baby

When the magical time comes the best place to have your baby is either in your apartment or in a public restroom. If you've been burning rock like I told you to do then the baby should come tumbling on out of your "vagina" and land wherever you have your ass-end aimed. Make sure wherever you have your baby there is no one else around because 21st century law has still not caught up with 21st century relaxation techniques and you might end up in jail at around step four.

You will notice the baby immediately after emerging from you is very ugly and blue, this is because babies contain "concentrated heat entropy". This heat entropy is the key to cooling off in style and the best way to release it is to insert your baby into a plastic bag or other airtight container. Store your baby in an alley, trashcan, toilet bowl, or simply toss it out the window of a moving car like a cigarette butt. Immediately after unleashing this heat entropy you may feel strange, somewhat guilty, this is perfectly natural and is a sign that the wonderful cooling action of the baby is working. To increase this soothing feeling try placing refuse on top of your carefully stored newborn, perhaps including fresh foods that might attract vermin like rats, maggots, and coyotes. These scavengers are nature's way of speeding up the cooling process and will heighten the chilly breeze that is washing over you! It may be 100 degrees in the shade but if you have a baby in the trash or free-falling out the window of your 30th floor apartment then you made need an afghan just to keep from getting frostbite!

I first mentioned this process at a seminar I gave earlier this spring at the Hyatt Regency in Cleveland. It was not well received and I can understand the reluctance of some people to realize that infanticide is an acceptable means for beating the heat. I think in this progressive society however, it's just a matter of time before this trend spreads from the forward-thinking poverty-stricken and teenage mothers who aren't afraid to improvise when they can't afford an air conditioner or ice in their drink. I hope these tips will serve you ladies well this summer, I know I plan on cooling off in style myself, but that's our little secret!

For those of you not overly interested in going toe-to-toe with Johnny Law, everyone's great friends at the benevolent Church of Scientology understand that the summer heat can be oppressive. Their new community outreach program targets women having trouble combating those swampy days while staying on the right side of the justice system. It's called "Tots for Cash" and all you have to do is pay a visit to one of their private birthing cubicles where you can beat the heat, get paid for it, and receive a free E-meter reading. According to the Church of Scientology, body thetans are one of the largest contributors to heat stroke. By utilizing my method of cooling off you can also get paid in cold hard cash by the Scientologists for your unwanted child. At the same time they might be able to use Dianetics or whatever to unlock your hidden potential to maintain a comfortable body temperature and keep perspiration to a minimum.

Why yes, it is Photoshop Phriday! Unlike that other week, this Photoshop Phriday features no Muppets, thus insuring that it will be up for more than half a day. But nobody likes Muppets, anyway. This week the Something Awful Forum Goons are running amok on magazine advertisements! Here's a sneak peak!

For all the other images stop on by this week's Photoshop Phriday!

Let's All Be Fucking Retarded!

While packing up items into various boxes, R-Lo was able to dig out an old cassette tape of various prank calls he and one of his equally immature and stupid friends made one night in high school (1992). We'll be uploading one of these eight prank calls every day until we run out of them, which we figure will be sometime around seven more days. Now before you listen to the prank, Rich "Lowtax" Kyanka demanded I print this disclaimer:

WARNING: These prank calls are all immature, retarded, and pointless, yet for some reason I think they're mildly amusing. I'm posting them because we've got a shitload of bandwidth and I figure maybe .00005% of you will find them entertaining. If you're not part of that .00005% percent, I don't blame you for hating me forever.

Wow, sounds exciting! Why not jump over and listen to the first prank, "The Greenhouse of Doom," where Lowtax calls up a greenhouse manufacturing company and asks a few questions that are supposedly vital to his purchase of a greenhouse. Well I've listened to the prank call and can name a few reasons why you should probably not listen to it, but hell, it's your bandwidth, sucker!!!