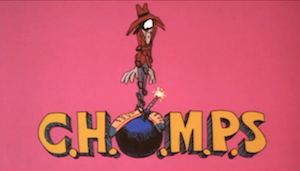 Overview: A scruffy little robot crime-fighting dog runs around town destroying cars, tackling mentally handicapped burglars, beating up black folks, admiring billboards of himself, and jump-kicking random people in the chest to death, all while a stupid goddamn song plays over and over and over until the viewer just dies of sensory overload.

The Case For: Well, at least this movie has more footage of dogs romping around than, say, Dogs. Also, some trombone player somewhere probably made enough off of the royalties to buy a fucking yacht.

The Case Against: That song. That SONG. THAT FUCKING SONG.

At last, we get to review a childrens' movie that somehow managed to appeal to a few actual children! We know this because of the glowing reviews scattered across Netflix and IMDB that are all clearly written by kindergartners, especially the one precocious young lad who inexplicably describes C.H.O.M.P.S. as "a parody." Or our personal favorite, the adorable little reviewer who calls it a "classic Disney movie" - it doesn't take a well-trained eye to quickly spot the two (or arguably three) things very, very wrong with that statement, the foremost of which being that C.H.O.M.P.S. is, in fact, proudly advertised[1] as a Hanna-Barbera production. Also, we're pretty sure that far lesser and more desperate men than Walt Disney wouldn't have even wiped their asses with the film negatives of C.H.O.M.P.S., so there's that.

But while the mouth-breathing yet outspoken parts of the unwashed Internet movie mob generally agree that this is "awsome movie if u like action dogs and dumb croocs", C.H.O.M.P.S. still only commands a 4.8/10 on IMDB, which means for every preschooler paying rapt attention, there are a couple of parents or very disappointed stoners downvoting this movie because after being forced to watch it on infinite loop, they'll never stop hearing the C.H.O.M.P.S. Hero Theme in their screaming nightmares:

Don't let his cute looks or wacky sound-FX tape fool you, though - CHOMPS is in fact the Judge Dredd of robot crime-fighting dogs. CHOMPS can - and will, without hesitation - smash through your windows, doors, and concrete walls; kick down trees, black people, and old ladies with pacemakers; crush and tear open cars like sardine cans; and really just commit all sorts of indiscriminate, massive property damage if he senses anyone littering, jaywalking, or pruning a shrub too close to their neighbor's property line within a 5-mile radius of your house. Because he has x-ray vision, and shit. And God help you if you blow a dog whistle anywhere near CHOMPS, because then he goes CaRaAaAAzzZZy and the wanton, thoughtless, illegal destruction really starts.

Creating a robot dog that goes on a rampage when it hears a commonplace noise is, perhaps, a slight knock against the genius of his designer. Then again, this is coming from a man who designed a robot which is identical to his own actual dog in every way, for the sole purpose of stumbling into a really stupid plot point in which the two get mixed up later on. On the plus side, CHOMPS is programmed with a revolutionary digital control system that makes him flip out and do sick canine karate moves on anyone who says a number between 1 and 100, which we think redeems all of the other flaws and will really make for some great advertising copy to synergize with the worldwide release of both the robot and this movie[2].

If this movie was really Hanna-Barbera's attempt to compete with Disney in the movie department, they failed in pretty much every conceivable way. Not only is C.H.O.M.P.S. stupid and perpetually annoying, the tone is all wrong, whipsawing between inane cartoonish violence, guys in ski masks bursting into offices waving guns around, and some deeply confusing canine version of blaxploitation just for shits and giggles. Wait, what was that second one again?

We don't care how comically inept the burglars are, "home invasion crime wave" is maybe a little dark as a plot setup for a kids' movie, complete with stern TV announcer telling us that "NOT ONE OF YOU IS SAFE." Oh well, at least it had more footage of actual dogs frolicking than Dogs.

[2] No really, any time someone says "one hundred" in the vicinity of Robodog, they get knocked down with extreme prejudice. At one point someone tries to explain this away as "you triggered his karate jump!", as though that just makes fucking sense.