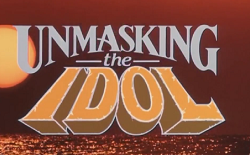 Overview: A creepy fucker with a pet baboon and a rapidly receding hairline who thinks he's James Bond dons a chainmail ninja mask and embarks on an elaborate attempt to pull off the world's greatest gold heist on supervillain Crimson Leader, who is the illegitimate love child of Cobra Commander and one of those red guys from Star Wars.

The Case For: After all of the formulaic garbage that we've suffered through, it's nice to see a movie with a genuinely surprising plot twist at the end. Unfortunately said twist is mainly a surprise because it's overwhelmingly retarded, but we'll take what we can get.

The Case Against: Remember when we said that Order of the Black Eagle was somehow the worst James Bond movie ever made? We were so very wrong. 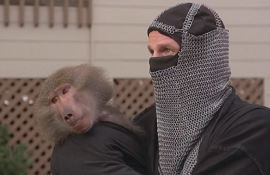 Just what is it that gives the James Bond franchise its long-lasting appeal? Exotic locales, high-tech cars, creatively insane supervillains, or does it all just rest on the suave charisma of Bond himself? We don't know the definitive answer, but if we set out to make a cheap knockoff spy movie, we'd probably try to copy at least one of those elements and hope for the best.

Such pedestrian, marketing-driven ideas were of no concern to director Worth Keeter, who later catapulted to success in the director's chair of assorted Power Rangers clones and derivatives[1]. Unbound by the rules of common sense or basic human morality, Worth created Unmasking the Idol, his magnum opus, a movie so antithetical to the James Bond franchise that if you bring a DVD copy of it within twenty feet of a television showing Goldfinger, it will explode violently, probably killing or mangling you, which let's be honest you probably deserved for having an Unmasking the Idol DVD in your hands in the first place.

Exotic locales? Sure, if you like a filthy back city alley, a nondescript hotel, and some old Legends of the Hidden Temple sets. The most high-tech car we saw was an old beater that doubled as a hot-air balloon, and the main antagonist, Scarlet Leader, is just a palette swap of Cobra Commander from blue to red, so no points for creativity there. And our suave, charismatic leading man is Duncan Jax, whose charisma, suaveness, and sexual magnetism have been replaced with a baboon that does backflips and gives people the finger.

Yes, Duncan Jax is finally back, and no, we still can't figure out what the fuck his phony accent is supposed to be. What we have come to appreciate is his uncanny resemblance to Chevy Chase. Specifically, that he's Chevy Chase doing Hannibal Lecter doing a piss-poor James Bond impression. There's some mumbling about terrorists and nuclear weapons sales, but it's crystal clear that the only thing D-Jax is really interested in is stealing the bad guys' giant pile of gold to fuel his lavish lifestyle. Hey, a super-post-modern backwoods cabin with a walk-in hot tub and a live-in Asian stereotype and manservant can't be cheap. Let's meet the man, the mystery, the thousand-yard rape stare incarnate: 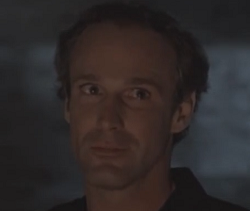 But you don't have to take our word for any of that, how about some video of the man in action?

Christ, what an asshole.

[1] Seriously, directing for VR Troopers, Big Bad Beetleborgs, and Power Rangers in Space? If you look up "success" in the dictionary it probably has a really cool picture of Worth Keeter, most likely sitting on a giant robot beetlesaurus giving two thumbs up.

[2] For our money, there's no better way to escape from a remote island full of hostiles armed with automatic weapons and bazookas than a hot-air balloon. Sure, you'll almost certainly be killed while you drift slowly away in a giant fragile cloth ball the exact size of the broad side of a barn, but at least you'll die in style.

[3] We might just have to crown a new Worst Movie Ninja, because even the somersaulting human punching bag from Ninja Vengeance wasn't fucking stupid enough to wear a shiny chainmail burqa over his ninja mask.