The Feral Fables of Groggery Gibbonman

"... the great fabulist Groggery Tirade Gibbonman, that curious relic of Jacqueline. From 417 to 498 V.E., he published an estimated 45,000 works, remaining consistently prolific even into old age. After his wife Cornmaze was condemned to a New Spanish mental asylum, Gibbonman withdrew from society and spent his final years alone at his famous address: 359 ½ Fourthpenny Avenue, Vertical London, Tier 410. - Ruttigut Pilford, Men of Cloudscape Empire: Figures of the Aftereurope 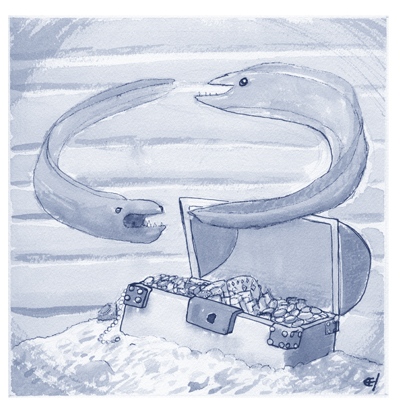 Far longer than long ago, down in the drifting silts of a mighty river delta, there rested the splintered shadow of a once-grand ship. Two eels found quarter in the dead ship's hold, where they circled a tremendous bounty of gold and gems.

"It is good to have such treasure," said one eel to his fellow, as they guarded their riches. "No burglar would dare to take it!"

The fellow eel was thoughtful, and sternly he replied: "What do you mean, a burglar?"

"You know..." the first eel said with a casual wriggle. "Burglars steal treasure, but they would never steal ours. For we have the mightiest mouths, the strongest snaps, the ..."

"Why are you talking so much about burglars lately?" asked the fellow eel. First eel had been bringing up burglars with increasing and unusual frequency, and as they orbited in suspicion the two eels were abruptly visited.

"Stick 'em up!" yelled the new eel, his face hidden behind a black mask, his form swaddled in a roguish cloak. "This is a burglary!"

"Oh no, a burglar!" yelled first eel. "We better give him what he wants, fellow eel!"

Fellow eel was not fooled, as he recognized first eel's brother even with the mask, and he struck at the imposter and his traitorous kin. But the eel brothers overpowered him, and he was ousted from the treasure pile.

"That was great!" proclaimed the new eel, with a satisfied laugh. "Now this treasure is all ours!"

"Yes" agreed the first eel, and they swam in happy circles around their gleaming lucre. "No ghost would dare to take it..."

The moral of the story is: The company of eels is fraught with costume changes. 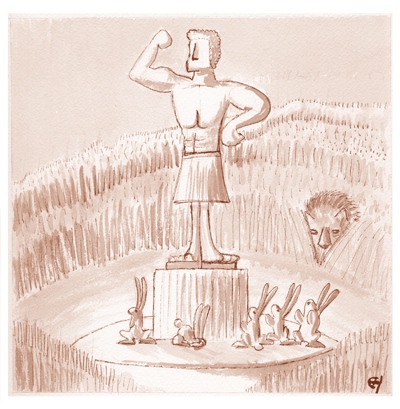 On a glorious, long-lost day, when the sun was red and the hills were yellow, the rabbits of the endless plains came together at a wind-worn dais.

"Oh mighty Hercules!" the trembling rabbits cried. "Hero of heroes! Strongest of the strong! Save us from the terrible lion, who tears our throats and spills our blood!"

But Hercules only laughed from Olympian high, to hear such creatures plead. "Save thy own, oh timid beasts! The gods help those who help themselves!"

Yet still the rabbits pleaded and cried, until their sobbing grew so loud that it met the ears of the terrible lion out prowling the windswept plain.

"Your chance at last!" spake Hercules, as the terrible lion pounced on the dais. "Rally, oh rabbitkind! And rejoice in the feast of victory, hard-earned and fair!"

But the rabbits did not rally, defenseless and frightened as they were. Defiant or faint, it mattered not; the rabbits were the terrible lion's sport, every one.

"Do not ask me for help, terrible lion," said Hercules with a huff. "You must make your own way in life"

"I am capable of that," smirked the terrible lion, lazy on the dais. "But thanks for making it even easier."

The moral of the story is: Every choice you make helps someone. 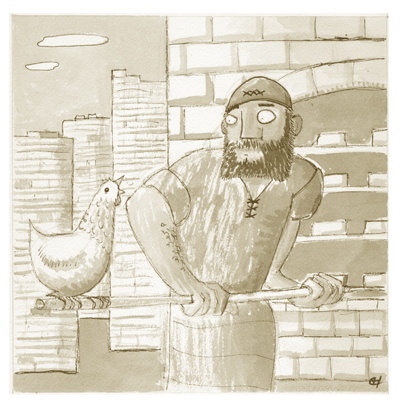 Once, in times too past to ponder, there was a happy brickmaker who worked his field of clay. Arms stained red, he baked the bricks with sweat and woodfire, laughing a governor's laugh with his customers and his kin.

That day, and only then, a hen came to see the brickmaker. She picked her way across the clayfield, pretty as could be, right up to the great hot oven where the brickmaker labored.

"Kicks and wicks and candlesticks!" said the hen.

The brickmaker looked up from his bricks and blinked, unsure of what had just happened.

The brickmaker narrowed his stymied gaze, trying to hone in on what he was witnessing. He had been wholly unaware of the phenomenon of talking animals until that moment, and this was a lot to absorb.

"Words that rhyme ... with ick?" he finally offered.

"Ticks and Picks" the chicken nodded. "Fix the nicks!"

"BRICKS! BRICKS! BRICKS! BRICKS! BRICKS!" screeched the hen, and she squawked about the clayfield in a fluttering panic. The brickmaker, stone still, watched nervously as the crazed hen zigged over tables and zagged into his oven. She clacked on bricks and burrowed under coals and then, abruptly, the hen was still.

A moment passed, and the brickmaker found he had to sit down, with a slant of religious concern in his eyebrows and the smell of dinner wafting through his work-place.

The moral of the story is: Some experiences will not teach you anything.