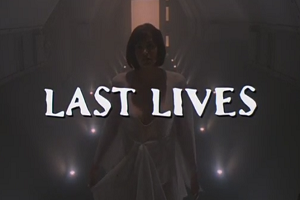 Overview: A psychic time rapist/Anthony Kiedis body double travels to the 1990s to win the heart of his one true love by massacring her entire family in front of her and abducting her from her own wedding. Will he be able to win her heart pin her down for long enough to forcefully impregnate her with his creepy-ass time baby? The answer is yes. Will Sheriff Beauford "Heehaw" McGrundle and the crack coppers of Bumfuke, Missouriltuckynsas show up 12 hours too late to stop every major crime, only to gun down the one unarmed hostage in a hail of bullets for no apparent reason? You betcha.

The Case For: If for some insane reason you've always wanted to see Jim Carrey stripped of all his talent and slapped into a Z- action movie, well, C. Thomas Howell in this movie looks kind of like him when he breaks out his Dumb and Dumber cosplay.

The Case Against: We think this might be one of those gimmicky "5-D" sensory overload movies, but instead of scratch-and-sniff cards or vibrating seats, Last Lives piles on the jump cuts and bright flashing lights to induce a real migraine in you, the viewer.

Trillaphon: Not sure whether I'm relieved or utterly terrified that we're about to witness a Worth Keeter movie that doesn't feature international man of lechery Duncan Jax.

Hydrogen: You should be relieved, because without D-Jax to channel his inner sociopath, our buddy Worth is a lot more reserved as a director. Unfortunately for him, he ran into another problem with Last Lives, which as usual some random IMDB personality has poignantly summed up for us:

Trillaphon: This is what happens when you use a Mad Libs book to storyboard your sci-fi action flick.

Hydrogen: I'm thinking Mr. Keeter originally had three totally disparate sci-fi concepts, but when he realized he could only afford to make one, he just mashed them all together into the chunky, putrid, cliche-riddled slurry that is Last Lives.

Trillaphon: The psychic powers is the part that really gets me, because it's so totally superfluous to the rest of the movie - half the characters in the goddamn movie are psychic, but not one of them ever accomplishes anything with their powers you couldn't reproduce by saying "Hey buddy, which way to Nutley St.?" or "So you said the gas is on the right and the brake is the left?". Case in fucking point:

Hydrogen: Got more fishtail in that limo than a goddamn sushi bar.

Trillaphon: We should point out here that Future Anthony Kiedis - in literally just the previous scene - used his telepathy to figure out how to work the highly experimental trans-dimensional gateway that got him to our world in the first place, but he just can't handle "left foot stop, right foot go".

Hydrogen: His henchmen couldn't possibly be any worse at driving, and yet they're content to just sit there polishing their guns while their limo is all over both parts of the road and most of the adjacent field.

Trillaphon: Hey, maybe they've had a few. I know the spastic epileptic with massive, explosive PTSD would be my first choice for designated driver.