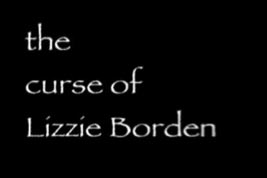 Overview: A college girl becomes obsessed with the legend of Lizzie Borden right around the time that a string of people are brutally killed with an axe. Is there a connection? Well, duh.

The Case For: The writer clearly at least did a Google search for "Lizzie Borden" before writing this thing. And it shows!

The Case Against: The axe murders are just ridiculous. In a movie that is primarily about axe murdering, this is a problem.

Lizzie Borden took an axe / And gave her mother forty whacks. / When she saw what she had done, / She gave her father forty-one.

This simple nursery rhyme, so often sweetly sung to children to encourage their parricidal tendencies, is all that many people know about Lizzie Borden. The truth is a bit more complex, and before we leap into this movie, I'd like to take a moment to clear up some of the facts. 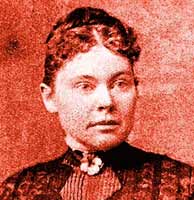 God, she was a looker.On August 4th, 1892 in the small town of Fall River, Massachusetts, Abby Borden (Lizzie's stepmother) and her husband Andrew Borden were hacked to death with a sharp, axe-like object. Andrew's daughter Lizzie was accused of the murders based on the fact that she and her stepmother deeply disliked one another and she never forgave her father for marrying her. Abby routinely subjected her stepdaughter to extensive mental and emotional abuse, which in those days was called "parenting." Today, Lizzie would have probably just ran to her computer and gone on MySpace to tell the world just how much her stepmother "suxorz," but this was 1892, and the closest equivalent to a computer that she had available had a wood handle and answered to the name "Choppy." Evidence mounted against Lizzie, such as the fact that she was at home when the murders occurred, the fact that she stood to inherit a very respectable sum of money if something should happen to her parents, and the fact that she was known around town to be - and I quote a noted historian, here - "a large, healthy woman of questionable stability."

Although Lizzie was acquitted by a jury of her peers (i.e., axe murderers), she was forever stuck under the shadow of the gruesome crime. After all, this is Fall River, Massachusetts here. It's not like anyone had anything else to talk about. Lizzie died a spinster, living alone in a freaking ginormous house that she bought with her murder money - I mean, inheritance. Even after her death, she remained the most famous parent killer in America until the Menendez brothers would try to steal her crown, not realizing that two Latino men could never upstage a white woman in this country.

Lizzie Borden's story has been adapted to the stage and screen numerous times over the years, almost always depicting Lizzie as the killer. Then came director Ford Austin, a man with a name so masculine, it actually beat me up once. Along with screenwriter Jeremiah Campbell, Austin envisioned a different side of Lizzie's tragic tale. He pictured a film that would show the world the truth, and finally depict Lizzie Borden as being innocent of her parents' murder. So innocent, in fact, that her innocence would drive her mad, prompting a killing spree in which she hacked all who falsely accused her into little pieces with an axe. And also she'd have super powers. And so The Curse of Lizzie Borden was born.

The movie opens with a group of young children reciting the familiar Lizzie Borden rhyme with the same intonation and drama they likely bring to their chorus of "Good moooooorning, Misses Schlesinger!" every school day. While our first scene does take place in a classroom, it is not the young children we are concerned with, but college students who, if movies have taught us anything, are the single most likely demographic to die at the hands of axe murderers, chainsaw massacre artists, and hook-hand enthusiasts. 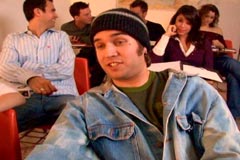 Godspeed, gentle stoner.Now, interestingly enough, the first part of this scene is actually the best written bit in the whole movie, featuring a decently funny argument between a professor and a Spicoli-esque stoner. The whole shtick ends with the stoner realizing that it's the middle of summer, and he doesn't actually have to be in the class, which is a summer elective for people interested in American folklore. It raises the question, how could anyone accidentally find themselves on a college campus, enrolled in a class in the middle of July without realizing it? I pondered this for a while before realizing that perhaps, just perhaps, I had just never been that stoned. In any event, the stoner walks out of the classroom, and out of the movie, and things start to go downhill like a paraplegic with faulty brakes.

The professor introduces the day's topic to his remaining students, the folklore surrounding Lizzie Borden. As luck would have it, even though there are only six students left in the class, two of them happen to be experts in all things Lizzie. One is a guy named Ryan who knows all there is to know on the subject simply because it happens to interest him. The other is a girl named Cassy, whose fascination with Miss Borden stems from the fact that she is certifiably fucking insane. The merest mention of the Lizzle Bordizzle causes her to drift off and have daydreams about the 1892 murders, while visions of her teacher and classmates chant "Kill! Kill! Blood! Blood!" 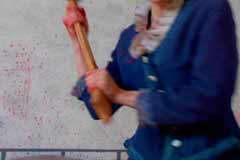 This shot is pretty much half the movie.Now, Ford Austin, that dashing slab of man, is rather fond of random flashbacks to the Borden murders. He tosses them into the movie wherever he can fit them, and why shouldn't he? After all the painstaking research and slavish effort that went into recreating the Borden household circa 1892, it's hardly surprising that he'd want to show it off a little, maybe educate a few people in the process. For instance, did you know that in 1892, all living rooms were decorated with furniture made in 1978? The implications are staggering! Did everyone in 1892 have time travel capabilities, or just furniture salesmen? And couldn't a furniture salesman, using his knowledge of the future, perhaps warned Andrew and Abby Borden that someone, possibly their daughter, was going to murder them? At last, the home furnishings-daughter conspiracy begins to come to light! Also, did you know that human blood was the color and consistency of Kool-Aid back then? It's probably because of all the preservatives we consume these days that our blood is all thick and syrupy. A nifty experiment might be to try to prove this hypothesis by cutting open an organic vegan. Even if the theory is wrong, you'd still win!

The flashbacks serve another important function beyond mere historical analysis. They also introduce an element of mystery into the narrative, by never showing Lizzie's head. Lizzie's physical appearance is supposed to remain a secret in order to make the audience wonder, once the killings begin, just who is really behind them. The DVD jacket goes even further, saying that, "the fun changes to fear as Cassy and her boyfriend realize they could be the next victims." There are three lies in that statement. First, there is no fun in this movie. Second, no one really ever realizes that there's a killer on the loose until it's too late. Third, any suggestion that Cassy may be in danger herself is pure chicanery. Cassy is the killer. It's completely obvious from the beginning. It wouldn't make the least bit of sense for the killer to be anybody else. But just in case there's any room for hope of some insidiously clever twist, remember how I said that we never see Lizzie's head? Well, that's not entirely true. Sometimes the camera gets a little shaky, and in those moments, her head does slip into the frame, and it is clear that even in the flashbacks to the 1892 murders, Cassy is envisioning herself in Lizzie's stockings.

Okay, tangent over. Back to the classroom. When she snaps out of her blood-soaked reverie, Cassy realizes she's been staring, slack-jawed, for several minutes, and everyone is looking at her. How embarrassing! She should totally kill everyone in the class, or she'll never live it down! Her boyfriend Andrew (yes, like Lizzie's father Andrew Borden. What a coinkydink!) asks if she's alright, but she just shrugs him off. (Editor's Note: At this point, the author lamely attempted to make an axe-related pun, like "that's what he gets for trying to axe her a question," or "Andrew should have known about her don't axe don't tell policy." He has been severely disciplined.)