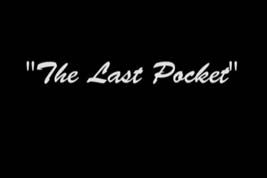 Overview: A son searches for his estranged father and is soon drawn into a seedy world of poorly-concealed green screens and shoddy plot twists.

The Case For: At long last, Vince Bowman makes an appearance in front of the camera!

The Case Against: At long last, Vince Bowman makes an appearance in front of the camera. 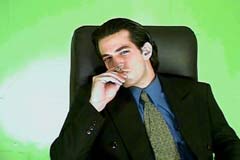 Mmm... failure.As with the previous two segments, this one begins with a brief monologue courtesy of Adam Aronson, the lovechild of Rod Serling and a jar of high fructose corn syrup. This time, he comes to us not from a rooftop, but from a comfy chair in front of a neon green wall, otherwise known as a green screen. "Ah, the good life," he remarks, as he lights up a fat cigar. The good life indeed, Adam Aronson. Nothing says "luxury" like puffing on a stogie surrounded by walls that are the scientifically precise color of pain, hoping that the heat from the cigar doesn't ignite the oil in his hair. I have to imagine that Bowman originally meant to use the green screen to edit a different background into this little bit, but forgot about it. Maybe Aronson thinks he's smoking in front of something swanky, like a still photo of a roaring fire, or an aerial shot of Machu Picchu. I can't think of any other reason to possibly put someone in front of a background that hideous, unless it was Bowman's way of saying, "Look, there are going to be a lot of green screen shots in this thing, and they're not going to be pretty. If you have to laugh, please get it out of the way now." The only other possible explanation I can think of is that Adam Aronson is deathly allergic to cats, and there was a cat in, like, every other room in the world, so they had to film this in the green or he'd break out in hives.

The real action, if you want to call it that (hint: you don't), begins with a young black man in the back of a cab. This is Darius, our protagonist, a character of such infinite depth and complexity that Vince Bowman could trust no one but himself to handle it. Darius has come to New York to find the father who abandoned him and his mother when he was just a baby. The driver drops him off outside a rundown apartment building and gives him directions to another building altogether. One might wonder why the driver doesn't just drop him off outside that location, instead of this one three blocks away, but it would be wasted effort, since Darius never follows his directions anyway. 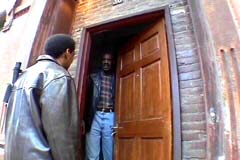 There's something wrong in this picture, I guarantee it.Instead, our Darius waltzes up to the first door he sees and rings the bell. A moment later, a huge bouncer opens the door partway and glares down at him. Fortunately, Darius knows just what to say.

Amazingly, the bouncer is unimpressed. Darius tries another approach and slips him a few bills. The bouncer closes the door, then opens it all the way to let Darius inside. You see this all the time in movies. Someone answers the door, but leaves it chained, so that the person outside knows that they're still not just barging in. It instantly creates an air of suspicion. Then, the visitor says or does something that piques the suspicious person's curiosity, and they shut the door, undo the chain, and open it wide to invite the visitor in. The problem is, this door doesn't have a chain. And when they do this sort of thing in most movies, they only open the door a crack. This bouncer opens it wide enough for his entire body to be visible, which is saying something, and which is certainly more than wide enough for Darius to squeeze through. Bowman must have seen this gesture in a bunch of movies and thought it looked cool, but no one had the heart to tell him that it's just a waste of time if there's no chain. Oh well.

Throughout our look at The Bowman Trilogy, I've done my best to examine moments that might provide some insight into the mind of Vince Bowman, to see how he developed on a filmmaker and as a person, largely in the hopes that it might lead to some enlightenment concerning his first full-length feature, the profoundly stupid Urban Ninjas. This is a perfect example. Darius goes through the door under the stairs, neglecting the obvious, larger door, and arrives at a secret pool hall. At least, I assume it's supposed to be a secret, since it is located under a staircase and Darius had to go through all that hootenanny with the bouncer to get in. But when he walks into the pool hall, it is (a) far too large to fit in the space under the stairs, and (b) well-lit thanks to the high quantity of large, airy, street-facing windows. In other words, this secret pool hall would be fully visible form the street. And yet, when Darius was outside the building, we saw none of those windows. Does this pool hall exist in some sort of extra-dimensional space? Maybe. Is it protected by sophisticated holographic cloaking technology? Perhaps. Could Vince Bowman have avoided these questions, and indeed, this entire discussion, by simply having Darius walk through the door at the end of the hall instead of the door under the stairs? Yup. One tiny change could have spared a whole paragraph's worth of inconsistencies, but Vince went ahead and did it his way. Isn't that terrific?