Not a bad week at all, with the grossly mis-marketed John Carter finding its way into Joseph "Jay Dub" Wade's good books; Bel Ami proving to Ian "Professor Clumsy" Maddison than Robert Pattinson's bow is quickly running out of strings; American remake Silent House reminding Martin R. "Vargo" Schneider that technique isn't everything; and, finally, The Raven convincing "Professor Clumsy" that some filmmakers really do like critics.

EXPECTATIONS: I actually have somewhat high hopes for John Carter. A good, old-fashioned sci-fi yarn is hard to come by these days, so when I heard Pixar's Andrew Stanton was helming a live-action version of the old-fashioned sci-fi yarn, I was instantly on board. Never mind the fact that Disney can't seem to market this film out of a paper bag. If Brad Bird can knock Mission: Impossible out of the park, I have faith that Andrew Stanton can do the same with even weirder material.

REALITY: You can't say they didn't try. While certainly entertaining and ambitious in its scope, John Carter (of Mars, as it might be titled in a sane universe) is yet another in a long line of boilerplate sci-fi stories dressed up in all the CGI chicanery that money can buy. At times the script seems completely broken, but there are enough fun moments here to offset the sometimes difficult plot. It's a film that can be sluggish and incomprehensible, but it's also grandiose and engaging whenever it manages to pull its head out of its ass. 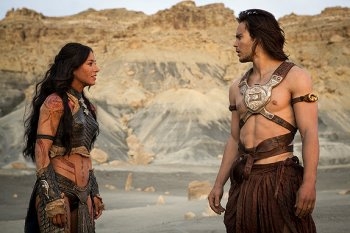 John Carter (also pictured: the recently overlooked Princess of Mars)John Carter (TV's Taylor Kitsch) is a former Confederate cavalryman on a quest for gold. While hiding out in a cave from Apache attackers, John finds himself accidentally transported to Barsoom, a Martian wasteland that bears a striking resemblance to Utah. There, he is discovered by a race of four-armed beings called Tharks, whose leader, Tars Tarkas (Willem Dafoe), sees great potential in this Earthman who can leap great distances in the Martian atmosphere. Before long, Carter finds himself thrust into the middle of a civil war between princess Dejah Thoris (Lily Collins) and warlord Sab Than (Dominic West).

Those are merely the broad strokes of the plot, as the full story is considerably more convoluted than I think is possible to relate in a single film review. Give me two or three weeks, and maybe I could get into the business of the Thurns and how Mark Strong's character fits into all of this, or the concept of the Ninth Ray, which still doesn't completely make sense to me, or how the inner workings of the Thark social structure relate to the main plot (because believe me, they do). My point is that this film covers an awful lot of ground in 132 minutes, and while it's by no means as sweeping in its scope as Star Wars or as utterly impenetrable as David Lynch's Dune, John Carter is surprisingly dense for such a simple fish-out-of-water sci-fi story.

Do you ever find yourself saying "Wow, that is so of Mars!"

Where the film really drops the ball is in trying to tell such a dense story in a manner that still befits a lighthearted action-adventure. The plot is extremely scattershot, and it takes a good half hour to really find a groove. Before we ever get to see John Carter on Mars, we not only get a prologue featuring the villain, but also a prologue about Carter's nephew, Edgar Rice Burroughs himself, which then leads into Carter's story of how he got to Mars in the first place. This is a lot to wade through before we ever get to see our first Martian, and it doesn't grant us much of a payoff. The rest of the film plays out like this as well, bouncing us back and forth between locales seemingly for the sake of a new setting to explore rather than advancing the plot at hand. Burroughs originally wrote his Barsoom books as a Martian travelogue of sorts, but that structure doesn't lend itself to a two-hour Hero's Journey film, particularly when every location looks the same anyway.

If anything, this film looks a little too "of Mars", we should try and downplay that.One thing that deserves mention is the film's cultural legacy. Edgar Rice Burroughs' original Princess of Mars series is one of the literary inspirations for so many of our most popular science fiction series today, yet unfortunately it arrives as a film in the wake of the Star Wars prequels and Avatar. Those films steal so much from Burroughs' writings that it almost seems fitting for the film version to rip off their visual styles wholesale. More than anything else, Andrew Stanton's vision of Barsoom is an awkward marriage of Attack of the Clones and The Chronicles of Riddick, minus all the daffy lightsabers, robots and space-zombies. When you think about it, the whole science fiction genre is one giant Ouroboros that never stops recycling itself.

So John Carter of Mars is unoriginal, except that it isn't (but then maybe it is). It's a convoluted mess, except the plot itself is fairly basic. Is there anything about this film that isn't an utterly mixed bag? Yes, hypothetical skeptic, I'm glad you asked. The action is fantastic. While Taylor Kitsch doesn't bring much to John Carter as a character, he is more than capable of carrying the film through its multiple action setpieces. The film's wealth of CGI characters are also very well realized; some of them wind up becoming more compelling than the live actors. If you'd told me the most endearing characters would be a scarred, downtrodden Thark with a chip on her shoulder and an energetic CGI cross between a bulldog and a slug, I'd have probably tried to pull off your mask just to make sure you weren't actually George Lucas.

MINORITY REPORT: Of. Mars. The title is John Carter OF MARS. The "Of Mars" is the interesting part! Why would you cut that out? - Martin R. "Vargo" Schneider