The Bowman Trilogy, Part 1: The Trainer

The Case For: Filmed in a real live gym!

The Case Against: It's a movie about an evil personal trainer.

A couple months back, we introduced you to hot new director Vince Bowman through a review of his first feature length film, Urban Ninjas. Vince didn't start off by just leaping into such a sophisticated and demanding project, however; his directorial debut was actually a trilogy of short films, which he also wrote, edited, and produced. Over the next few weeks, we will be taking a look at this seminal collection, appropriately titled The Bowman Trilogy. 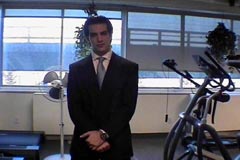 "Submitted for your approval: my facial grease."Today's topic will be the first film, a chilling tale of violation, madness, and violence entitled The Trainer. This fevered vision of an innocent trainer-client interaction gone wrong begins in classic Twilight Zone fashion with host Adam Aronson acting as a poor, poor, very poor, horribly, wretchedly poor man's Rod Serling. Whereas Rod Serling captivated audiences with his darkly charismatic presentation and delivery that was at once fatherly and slightly sinister, Adam Aronson squirms about like he's going through puberty. Not like he's in the middle of puberty, mind you, but like he's going through the whole thing in the span of thirty seconds. Also, where Rod Serling often opened his legendary vignettes with a brief monologue about a seemingly ordinary child who is not as innocent as he appears, or about a seemingly ordinary town that hides an unsettling secret, Adam Aronson opens this short film by standing in a gym and describing the purpose& of a gym. 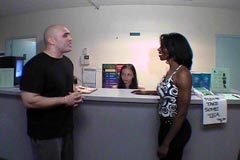 Ironically, the one on the left is going to be training the one on the right.After keying those of us who don't share Vince Bowman's razor sharp intellect into just what exactly takes place in one of these so-called "gyms," the narrator steps away and allows the action to unfold. The action, in this case, involves a woman named Susan opening a new gym membership. Call your chair manufacturer and tell them you want a partial refund for your seat, because you'll only be using the edge! Little does Donna know that her new membership comes with a free session& of evil! No, sorry, it actually comes with a free session with a personal trainer. That was my mistake. The receptionist is about to call for a personal trainer to come schedule an appointment with Susan, but one arrives before she can even place the call. That's a little sad, isn't it? This poor guy was just standing within earshot of the front desk all day, hoping someone would come and open a membership so he could pounce all over it. You just know the session is going to be really high pressure, too. This guy clearly needs some steady clients to fill his time& with evil! No, no, sorry, with regular business. Again, my bad.

The personal trainer, a bald gorilla by the name of Felix, cheerfully greets Susan and asks her when she would like to come in for her free session. Susan replies that she works late every day and usually can only make it to the gym shortly before they're about to close. This begs the question, why the hell is she signing up for this gym? It sounds like she needs a twenty-four hour facility, or at least something that stays open a little later than this crappy place. Don't worry, Susan, you can get your free personal training session at practically any other gym, believe me. 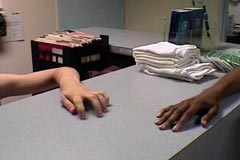 Look at that arm. It's like something out of a much better horror movie. Probably something Japanese.Felix graciously offers to stay late one night to meet Susan's schedule. As they work out the details, the receptionist slowly inches her hand toward Susan's in a manner that might be a warning, or might be the awkward sexual advance of an alien being who killed the receptionist and donned her skin, and who has yet to master the subtle art of human mating rituals. That second option would probably be a lot more interesting than this movie, but we'll never know, as Felix shoots the receptionist a dirty look that stops her cold. Felix is the most terrifying personal trainer ever, and I mean that. I honestly do. Not because of the mean looks, though. More because he's a big dude, but he's actually in pretty lousy shape. There's nothing more frightening than wasting your time with a personal trainer who doesn't even know enough about fitness to get in shape himself. I mean, it's not exactly the sort of "frightening" that I'd go and make a movie about, but that's why I'm not Vince Bowman.

We then see Felix sitting in the locker room, trying to make himself dry-swallow what looks like a tablet of extra strength ibuprofen. But wait! That's not ibuprofen! It's anti-schizophrenia medication! Well, okay, it is ibuprofen, but for the sake of the story, bear with me. The pill is meant to keep the voices in his head at bay. Naturally, the voices in his head are none too thrilled with this idea and yell at him until he can't swallow the pill and ends up just flailing weakly at the lockers. What time is it when your personal trainer is a flabby lunatic who chokes on advil and then cries about it? Time to get a new personal trainer!