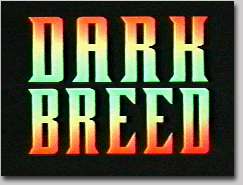 Overview: "Dark Breed" is simply one of the biggest science fiction ripoff films to ever be shot. Every single aspect of this movie has been borrowed from another film, and it offers absolutely nothing new or original. Jack Scalia, the main character in this movie, should quit before Congress passes a law banning him from "starring" in anything else.

The Case For: Pyromaniacs will undoubtedly love the zillions of explosions in this film, and people who have a Jack Scalia jumping fetish will go orgasmic as well. Oh yeah, Jack's ex-wife is pretty hot too.

The Case Against: Movie plot was apparently made by tearing random pages from every single other science fiction movie ever created and pasting them into a single folder, repeated exposure to shots of the same explosion over and over may cause some viewers to become sterile. 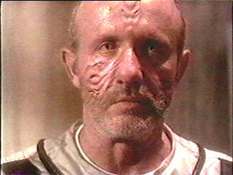 When you have an alien parasite in your chest, it of course gives you an awful complexion and eyes from "Thriller".

There comes a point in some peoples' life when an intervention is necessary. Sometimes human beings, due to either their own character flaws or mitigating circumstances, are led down a self-destructive path which will ultimately end in their own demise. We, as friends, are obligated to step in and prevent this downward spiral of failure no matter what the costs. With this in mind, I would like to reach out to everybody across the Internet with the following merciful plea:

Now I do not know Mr. Scalia personally, so I am hoping that somebody out there will deliver my message to him. If anybody out there has a direct line of contact with Mr. Scalia, please inform him that he is not, and will never be, a big name movie star. He is a cut-rate second hand "Rutger Hauer" substitute, which ranks him approximately 12,537th on the evolutionary ladder of acting, right below all the people in the background of the Carl Jr's commercials. Let's face it: stardom just isn't in the cards for Mr. Scalia, and there's no way in hell that he will ever become a big ticket movie name. As proof, let's take a look at some of the more recent pictures and television shows he's starred in:

Generally speaking, actors like Jack Scalia max out when they play such important roles as Joey Buttafuoco. I mean, where can you go but down from there? I'm sure cinematic classics such as "Chained Heat 3" and "Urban Justice" were a pleasant change in pace, but can anything ever match the fervent excitement of playing somebody as interesting and dynamic as Joey Buttafuoco? I wouldn't think so, and seeing Jack Scalia in a movie like "Dark Breed" only confirms this notion.

I'll just cut to the chase right now: "Dark Breed" is every generic horror / sci fi film rolled into one intensely stupid 90 minute chunk of pure drudgery. If you've ever seen at least one movie that even mentioned the word "alien" in it, chances are you've seen a film that this movie has ripped off. It boggles my mind why anybody would make, much less release a movie like this, as it's so painfully banal and predictable that even the most brain-damaged of Jerry Lewis' kids can predict the entire plot by merely looking at the tape's film jacket. Let me sum up the plot as succinctly as possible:

Somehow the movie finds a way to stretch those three basic things into an hour and a half of sheer pain. I guess I have to give the director kudos for that because God knows it's hard enough for me to stretch my movie reviews from a simple "it really sucks" to the three-page dissertations I feature on this site. With this in mind, let me recap the entire vulgar story behind "Dark Breed".