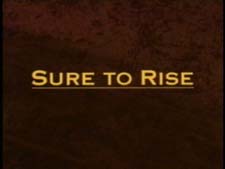 Sure to Rise - written and directed by Niki Caro

Of all of the shorts in "Dark Stories: Tales from Beyond the Grave," "Sure to Rise" is by far the most useless. With almost no dialogue, only the loose workings of a plot, and occasional bursts of annoying or just plain bad music, this ten minute dry heave has no redeeming value other than to make the other shorts look better by comparison.

An ugly woman named April spends her days collecting crap that washes up on the beach. She stumbles upon a skydiver who is alive, but badly injured and tangled in the cords of his parachute. Being a well-educated and well-socialized individual, April tosses him in her little wooden crapwagon, carts his back to her busted trailer, and hides him rather than getting him medial attention or alerting the authorities. What a sweetheart. She trades a couple of mutant children food for a magazine and other such useless garbage, as is her custom, and tells them to bring medicine to trade the next day. I guess she can just count on the fact that two little hick children with the instructions to bring "medicine" will automatically come back with precisely the needed pills to help a man who has just fallen from fifteen thousand feet. A helicopter flies overhead with its searchlight going. Most likely, it's looking for signs of the skydiver who someone must have reported fell around that area. April hides under a blanket until the helicopter passes, then climbs into bed with the skydiver. Hurrah. 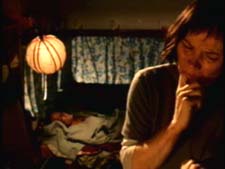 A team of men come to look at the trailer park. Evidently the land is being used for something else and everyone has to move on. When a man comes to tell April she has to get out, she maturely runs out back and hides behind her trailer until the man just tacks an eviction notice on her door and leaves. That night the kids bring three totally random bottles of prescription medications. April tries to stuff some of the pills down the skydiver's throat and he bites her, so she mixes them in with some pudding. Can you just feel the excitement, here? Then April gets into bed with the skydiver again. Her trailer, thought to be abandoned, since no one was home when the guy came by earlier, is lifted by crane out of the trailer park. When the sudden jostling wakes her up, April looks out her window to find she suddenly has an ocean view. Happy with her fantastic luck, she goes back to sleep. Roll credits. Slit wrists.

Here's a free tip to everyone who thinks that they're going to make the next super-artistic short film that blows everyone away: showing poor, ugly people doing nothing does not automatically make your movie artistic. Neither does including a grand total of three lines of dialogue. No action plus no dialogue equals a fucking boring movie. Throw in the occasional swell of painfully bad music, and you've got a real winner. Niki Caro should be dragged into an alley and beaten unconscious with a VHS copy of "Bill and Ted's Excellent Adventure" until she (he?) learns the value of narrative structure and character development. Oh, an no, this sure as hell isn't a tale from beyond the grave, either. At best, this is a tale from beyond the bargain bin at Walmart.