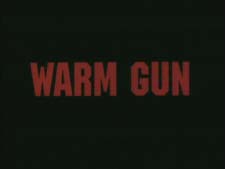 This is much better than the original title, "Excited Gun Molecules."

After the sheer garbage of "Sure to Rise," "Warm Gun" feels like the work of a master filmmaker. At the very least, it is probably the closest thing to a Tales From the Crypt-esque story. It's got a solid story arc, a nice, if predictable twist, actors who speak intelligibly more than twenty percent of the time, an intelligent script, and direction that isn't half bad. Aside from a couple quick sound issues and a few lighting problems, "Warm Gun" has its act together.

The opening credits are dispersed between shots of Roger, a salesman, talking to a silhouetted figure in a setting that gives the impression of a police interrogation. Roger starts talking about how some nameless person might have been having a bad day, and other such reasons that let us know a crime has been committed. The scene changes to an office at the start of the day. Roger is talking with Wayne, the new guy, when Bruce, the office asshole who is notorious for stealing other people's sales walks in. Wayne warns Bruce about poaching from him. After Bruce leaves, Roger shifts the conversation to his annoying roommate and his neighbors who park at the foot of his driveway and "coined" his car. Wayne calmly suggest that he get a bunch of guys together and show his neighbors he means business. On the way out, Wayne casually asks Roger if he'll be at home that night. 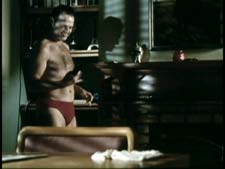 I don't need to be seeing this.

Flash forward to that night. Wayne shows up at Roger's place, saying he was in the area. He produces a gun and encourages Roger to have a close look at it. After he does, Wayne says he paid his neighbors a visit and killed them all. He then leaves the gun with Roger, now that his prints all over it. Roger quickly wipes the gun down, but that doesn't change the fact that the cops will be on their way to investigate the shots. Shortly after Wayne takes off, Roger's roommate enters. It turns out that it's Bruce, and he's in nothing but his underwear. Delightful. When he asks about the gun, Roger goads Bruce into picking it up and playing around with it a little, then he leaves, claiming he's going to a friend's. Bruce then puts on some spy-theme style music and prances around the house in his underwear, pointing the gun at things. This segment is mercifully poorly lit, so while we miss some of Bruce's antics, we also don't have to see the bulge in his briefs bouncing around as he leaps around corners like a freak. The cops show up while Bruce is doing his thing, and he ends up pointing the gun at the wrong door at the wrong time, and the cops open fire.

We return to the interrogation room, and now it's obviously clear what Roger is talking about. Bruce was running around the house in his underwear with the gun and his prints are all over it. Everything points to him. Roger leaves Wayne out of it and plays right into the police's assumption that Bruce was the killer.

If you couldn't figure out the twist from the moment Wayne showed up at Roger's house, then it should be painfully clear the moment Bruce enters as the roommate. Also, since they would have no immediate leads, it seems unlikely that the police would have showed up at Roger and Bruce's place with guns drawn and kicking in doors. That's just a bit excessive. Other than those glitches though, "Warm Gun" is a pretty good short. Starting and ending with the interrogation frames the action nicely, and the characters come across well. I don't know if it's necessary for Roger's roommate to also be the guy everyone in the office hates, but I can't say it doesn't wrap things up nicely. This short is certainly a dark story. It may not exactly qualify as a tale from beyond the grave, but it's definitely closer than any of the others.

The seven shorts that comprise "Dark Stories: Tales from Beyond the Grave" vary greatly in quality and subject matter. None of them were really amazing, but most at least showed some promise. "Warm Gun" and "The Exploding Self" stood out from the pack as the two winners, while "Sure to Rise" can suck the sweat off a baboon's big, red ass. It's difficult to speak about "Dark Stories" as a whole, since it's made up of so many different projects from so many different people, but I'm going to do it anyway. As a whole, "Dark Stories" blows goats. I just can't figure out what purpose it serves to the film community. I can't really imagine someone pitching an idea for a film to a producer and saying, "People are tired of collections that feature only the best of a genre. What I want to do is shake things up! Show people the most mediocre cinema New Zealand has to offer! What, you don't like that idea? Okay, tell you what, I'll throw in a good bit, too, and a couple really shitty bits." But that must have been how this project got off the ground. This anthology certainly doesn't justify its title. And let's take one more look at the movie's self-description:

In the tradition of Creepshow, Tales from the Crypt and Bordello of Blood come terrifying stories of horror, mayhem and destruction leading you down a frightening path to the depths of hell!

That's a big negative, Houston. And now, to assign this movie some arbitrary scores that if anyone asks, I'll say were based on complicated averages and weighted ratios.