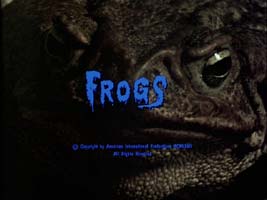 Overview: A rich family and a freelance photographer face an island full of amphibian and reptilian enemies who want to teach them a rough lesson in giving a hoot and not polluting. Sadly, the interspecies communication quickly breaks down and the animals just kill them instead.

The Case For: The use of many different species shows that a lot of time and effort went into making the animals on the island seem numerous and diverse.

The Case Against: The animals almost never actually appear in the same shot as the humans they're killing; many of these species would never be found in the same geographical area; large chunks of the film make no sense whatsoever. 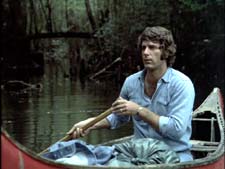 In 1972 the environment was in shambles after the third nuclear world war, and the situation was only worsened by the coming of the biblical apocalypse, during which the forces of Heaven and Hell met to do battle on the plane of Earth with flaming swords and ethereal armaments. The time was ripe for nature documentaries showing the dangers of polluting the environment. But two writers - Robert Blees and Robert Hutchison - and one director, George McCowan, decided that a simple documentary wasn't enough. No, the people had to learn to fear polluting if the environment was ever going to recover from the time in late 1971 when the robots rebelled against their human masters and released hundreds of thousands of gallons of toxins into our rivers to try to slaughter us all.

And so "Frogs" was born. The basic premise of this movie is simple: people polluted too much, now nature is pissed. Nature, in this case, is represented by a cast of nearly six hundred frogs and toads, as well as a menagerie of snakes, lizards, crocodiles, birds, and tarantulas. But really it's all about the frogs. The problem is, even in large numbers, frogs simply don't have the kind of natural defense mechanisms to thwart the human race. I mean, even if you were to walk into a room and find the floor absolutely teeming with frogs, your reaction would probably be one of curiosity and amusement rather than fright. You're not in any real danger. They have no claws, no teeth to speak of, and they would have to leap on you in the thousands to possibly amass enough collective weight to bring you down and smother you. Frogs just don't have the menace to carry the movie. But nonetheless, "Frogs" exists. To prove it, I will describe the plot now. 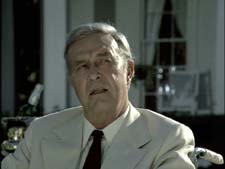 The family is cordial enough, except for Jason, whose main purpose in this movie is to prevent everybody from enjoying the Fourth of July by forcing them to celebrate the Fourth of July. However, all that anyone wants to talk about is the number of frogs populating the island. Apparently they're making a lot of noise and keeping everyone up at night, and since these people are rich, this is the most important problem in the world. As we all know, the importance of your problems is directly proportional to your bank account. For instance, if you had the bubonic plague and were on fire, this would be of little concern. Most likely you would just be told to be glad that the fire will kill you, sparing you the prolonged agony of the plague. On the other hand, if Bill Gates lost his keys, the National Guard would be called in.

To add emphasis to the point that there are frogs everywhere, the camera frequently cuts away to shots of frogs. They're not particularly menacing frogs, but this is largely due to the generally complacent nature of frogs and less the fault of the filmmakers. Of course, it is the fault of the filmmakers that the chose to make a movie about frogs in the first place, but that's old news. This, sad to say, is the dominant technique of portraying the absolute horror of the malevolent animals in "Frogs." The camera just cuts away to a shot of the animals just sitting there contentedly. In fact, there are only about five times in the entire movie where the animals and humans appear in the same shot. Usually it's just a shot of person - shot of animal sitting there - shot of person screaming - shot of animal sitting there - shot of dead person formula.