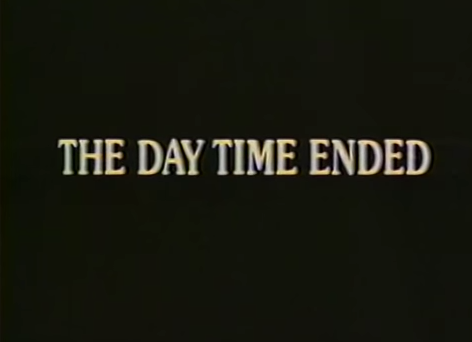 Overview: According to IMDB, "Aliens visit the solar-powered house of a middle-class family, and the house is suddenly sucked into a time warp that transports it back to prehistoric times." As far as we can tell almost none of that is true, especially the part about anything in this movie being "sudden". Slow-motion documentary footage of glaciers melting is sudden compared to The Day Time Ended.

The Case For: The musical score is a rare grabbag of treaty delights, including unexpected aural pleasures like "Variations on Theme for Super Spooky Movie for sousaphone and Fairlight CMI mallets" and "Mephistulo's Chamber Blorts for Granulated Tubathizer, feat. Partly Conscious Cello Solo in B-Flat Minor."

The Case Against: This movie is Blood Shack with twice the running time, four times the horses, a bunch of glowing bullshit and some trashy sci-fi novel cover murals, and an evil floating vacuum cleaner that does...nothing. 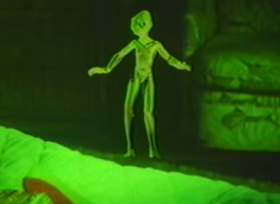 Directed by John 'Bud' Cardos in 1979, The Day Time Ended is very much a product of its, well...time. A film that painfully, groin-pullingly straddles that magical, hallucinogen-covered line between shitty late 70s and shitty early 80s science fiction cinema with all of the amazement and wonder of a feral poison-frog-licking child, TDTE is that rare sort of movie specimen that boldly, proudly refuses to make even the tiniest bit of goddamn sense or conform to anything you could possibly imagine to resemble a purpose for existing. It's also a great reminder that you should never trust anybody nicknamed "Bud", come to think of it.

The plot summary tacked onto IMDB goes like this: "Aliens visit the solar-powered house of a middle-class family, and the house is suddenly sucked into a time warp that transports it back to prehistoric times", but seeing as how half the words in that are either totally irrelevant to the movie or just completely made-up and whoever wrote it is obviously a slobbering idiot, we'll try to do you one better. By the way, is anyone surprised that once again Charlie Band has a hand in this? The man would bankroll a colonoscopy for DVD distribution if he could manage to work Tim Thomerson and some weird, blocky-looking aliens into it somehow.

Tim Thomerson being in TDTE is, sadly, just an idle fantasy[1]. Instead, the star of this cavalcade of shame and confusion is...is...hell, we don't know. Maybe it's the little girl who is gifted with some kind of vague power to make wishes come true, which she uses to make the lights turn on when she walks into the room and to turn off a car (wishing away the terrifying alien menace just never seems to cross her mind.) Then again, this is the same little girl who is 100% certain that the surprise waiting for her in the barn at her Grandpa's decrepit desert horse ranch is "a puppy", and whose instinctual reaction to a giant pyramid of glowing nuclear waste is to give it a big fucking hug.

Okay, well she doesn't accomplish anything and has no redeeming qualities, so let's just move on and never talk about her again. Maybe the protagonist is Death Valley moisture farm horse ranch owner Gramps, a man so old and craggly even Matlock would crack jokes about how wrinkly his balls are over a rousing game of criminal justice bingo. When the Great Gazoo and his mischievous green triangle start ransacking the place, Gramps immediately switches into ornery geezer mode and starts blaming all manner of invisible hoodlums. Sand hoodlums, sky hoodlums, horse hoodlums, you name it. No really, go ahead--start naming things. Whatever you like. Just make some shit up, we'll wait. Don't worry, the movie will too; not like anything else is happening anyway.

And by the way, keep in mind here that their little adobe abode looks to be about 600 miles away from anything remotely resembling life in every direction, so it's not like any of these wild sand people black people goddamn Jews innocuously nondescript punk teenagers accusations Pop-Pop is tossing out like old cabbage make a whole lot of sense even in the non-crotchety old man sort of way. Then again, neither does this:

[1] For the record, you know that you've been watching godawful movies for much too long when your fantasies start involving Tim fucking Thomerson.