Dawn of the Dragonslayer

Overview: This movie really wants to be a Game of Thrones audition tape, but they forgot to include any sex, violence, or political intrigue, so it's mostly just filthy guys in fur coats looking intense and yelling about nothing in particular. And a dragon.

The Case For: Dawn of the Dragonslayer is the perfect movie, assuming you're recovering from major brain surgery and are looking for a series of foggy northern-Ireland moodscapes to just stare at slackjawed for hours on end.

The Case Against: The beautiful, breathtaking cinematography will ruin other fantasy movies forever once you've seen Dawn of the Dragonslayer. "Cinematography" means "nice landscapes we pointed a camera at and mostly focused", by the way.

Unlike most of the movies that come across our desk, Dawn of the Dragonslayer is a real gem, a hidden diamond submerged deep within the barrel of pig feces that is the realm of low budget sci-fi and fantasy B-movies. Sure, it might be a bit morose at times--plodding, even--and yes, some people might even try to tell you about "pre-high-school dialogue" or "dry, predictable plot", but they're just not real connoisseurs of cinema. Thanks to the vigilant fellowship of sincere and socially responsible dragon movie enthusiasts getting the word out, DotD even once held a well-earned 7.5 IMDB rating, before its name was dragged through the internet movie dirt by bitter muck-raking lowbrow scum.

But those were simpler times, in days when maidens were faire and chaiste, men coarse and unyielding, and fog plentiful; days when noble and mighty dragons may or may not have ruled the skies on especially clear days, depending on who you asked; days when no one accused anyone else of scribing ridiculously fake and uncomfortably cloying songs of praise for obviously terrible movies in exchange for money on yonne internet. Yet lo, while those days may be gone, they shall not be forgotten, but will live on forever through the magic of a truly rare breed of deep and serious dressup imaginary dragon minstrel show: Dawn of the Dragonslayer.

First off, let's talk about this fog for a second here. By virtue of its splendathurous and mustilicious coastal Irish setting, DotD has easily, hands-down some of the thickest, ropiest money shots of salty sea fog you will find anywhere in the epic low budget indie dragon fantasy movie biz.

There is so much fog in this fucking movie that God himself couldn't have a shave in it. The combined efforts of every 80s hair metal supergroup road team and shitty horror movie director of all time working closely together with the boys at NASA and Mestema with a block of dry ice the size of Cleveland could not even come close to producing the voluminous next-level fog shits you see going on in this movie. It's like you're right there, inside the fog. Part of it. One with it. There's so much fog you can't even see the fog that's behind the hand that's in front of your own face which you also can't see because there's too much fog in front of that too to be able to see it.

When it comes right down to it, there's nothing better for world building than just the thickest, pea-soupiest fog you can imagine, because literally anything and anyone could be on screen at any time and you wouldn't even know it. It's unpredictable, chaotic, just like real epic fantasy life. Hell, you could be watching a completely different movie than the one you think you're watching, for all you know. And don't even get us started on the cinematographic genius of those long shots where you can see the vague silhouette of a dragon flickering faintly against the grey horizon, brother. Just try painting visual art poetry like that on a medium that isn't fog. Please.

When we say politics, don't expect Game of Thrones here, and we mean that in the absolute best way possible. Let's be honest, any idiot can scribble down a bunch of crass, overcomplicated, melodramatic political intrigue about usurping entire kingdoms and giant armies clashing and whatnot and fill it with lots of British titties and baby decapitations or whatever and call it a day. But it takes a real writer with real skills to set a medieval fantasy/political thriller in just one single castle ruling over just a solitary patch of Irish peat bog with a grand total of maybe twelve subjects, several of whom are most definitely goats, and populate it with this kind of depth and nuance.

Will the Baron of Swamp-upon-Fogbottom get invited back to Court this season, or did his comment about the meat pie two fortnights past taint his favor with the Thane of Grassley Patch Hill beyond repair? Either way, the love triangle between the transparently evil nobleman, the Baron's plucky and vaguely magical daughter, and the filth-caked flame retardant peasant with a heart of gold will keep you clinging desperately to the edge of your seat. Here's just a taste of the non-stop excitement, featuring a literal game of chess while the figurative chess game of medieval politics unfolds in all its splendor:

But just who is this titular Dragonslayer, anyway? From his humble beginnings as the son of a charming but dirt-poor Irish farm lad, our hero Will rises, as so many peasants did in those fantasy days, to become one of the noble and mysterious order of Paladins. In fact, the Paladins are so shrouded in mystery that nobody actually knows how he became a Paladin, or really what that even means or is, except that it seems to involve becoming dragon-fireproof. There are some small clues expertly buried in the plot, like how Paladin-ness is definitely not hereditary since Will's dad got pretty unambiguously roasted like a kalua pig by the resident dragon.

Don't expect some big, flashy magical display or shooting fireballs around or really doing anything other than not dying from dragon breath from Will, which would obviously be pretty cheap and cliche. His powers are subtly understated and cloaked in enigma; in a way, Will is kind of a lot like Gandalf, only without all the weird spells and giant ridable eagles and Christian symbolism and stuff - you know, a working man's Gandalf. A Gandalf deconstructed, perhaps. A modernist Gandalf, powerless to banish the ever-looming Balrogs of infinitely self-replicating existential dread and solipsistic despair to the formless shadow caves of moral relativism. An Anti-Gandalf. Gandalf Reloaded. All of which, when you think about it, is a really interesting and unique twist on the usual ho-hum grabbag of Tolkien mythology if you ask us. 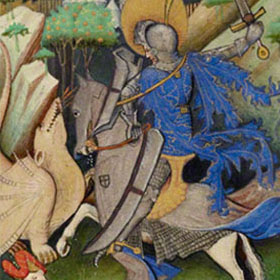 Not at all what Dragon Slaying actually would look like irl.Now, we've done a lot of research on dragons for our own dragon novels, Dragon Punchers: Mystrils of Hyperternion, and Dragon Punchers II: The Rise of Homunculux, and we've got a pretty keen eye for when they're good and feel grounded in true-to-life, well-known, real-ass dragon facts--and, truth be told, get pretty cheesed-up when they're bad. This dragon, for the most part, is basically good as hell. We're talking primo stuff here. Class 3 Titan scales, the works. Sean Connery in Dragonheart? Unfortunately, he can't talk in a thick Scottish brogue, which is definitely a few points against the dragon realism here. But his penchant for clinging to walls like a bat and his undying hatred for anyone playing a recorder are great defining character elements.

We really hate to give away the ending of such a terrific movie, but there's no way we can convey how amazing Dawn of the Dragonslayer truly is without it. After dancing around each other for 80 minutes of masterfully subtle antagonism, Will and the Dragon finally meet on the field of battle, conveniently about three seconds after Will is done kneeing his love competition in the groin to death over a cliff. Their fight is one for the ages:

Wow. We just switched the movie off right then and there so we could sit back and absorb all the joy and sorrow of that climactic ending. The genius of Will using his magical handkerchief to protect himself from the massive fireball, and then the sublime tragedy when he's roasted to death while embracing the cold truth of his destiny...this is drama done right, friends. He knows he's going to die pointlessly, but he does it anyway because it's his fucking purpose. And if we've learned anything about dragons in our years of complex, multifaceted interdisciplinary research, it's that they're pretty big and tough as hell, and if you think you're going to win a 1v1 against one, buddy, you're barking up the wrong treasure hoard.