Our nameless kidnapper drives out to the woods in the heart of the Blue Ridge Mountains (I assume - again, nothing in the movie actually indicates the location, but I'm working with the title, here), where he conceals his identity by putting a burlap sack over his head and finally lets Meghan and Vera out of his trunk. Naturally, when the girls get out, they scream bloody murder and demand to be set free. No, I'm just kidding. They actually stand there silently while he ties their ankles together, giving them enough room to shuffle along, but not enough to go running off. Baghead shows them that he has a rifle and a large knife, then wordlessly leads them deeper into the woods. 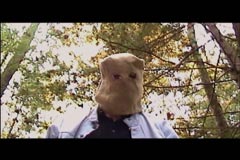 What? The hockey mask idea was already taken.As I said before, Joshua P. Warren loves traveling scenes. This is no mere montage. No, we actually watch Baghead lead the girls through the forest in total silence for the next ten solid minutes. Along the way, we get a good feel for Joshua P. Warren's second love - feet. Guy loves him some feet. Any chance he gets to zoom in on the girls' matching black high heels as they stumble through the brush is just one more feather in his cap, and by "feather" I mean "erection," and by "cap" I mean "pants." I hate to leap to conclusions about other people's fetishes, but when I see a thirty-second close-up of a girl in black heels sinking into mud, well... let's just say I've been burned by this sort of thing before.

On and on they walk. A full fifteen minutes after the last spoken word, one of the girls finally speaks up when Baghead lets them take a break. She demands to be released, but is rudely cut off by Baghead sticking a finger in her mouth, which is now my new favorite way to shut people up. 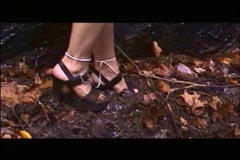 Hey, everybody loves feet! [/quagmire]All this time that they've been walking, one thing has been implicitly understood - Baghead is going to kill them, rape them, or both. It's just a matter of when. But Baghead finally unzips his fly, it turns out that he just needs to take a dump. And also that he's really lousy at this whole kidnapping thing. For instance, when holding people against their will and marching them through the woods, it is generally a good idea to (a) make sure their handcuffs are secure and (b) not leave your gun unattended while you go off to drop a load. With her captor distracted, Meghan lets herself out of the cuffs, grabs the gun, and blows Baghead's brains out. No, I'm just kidding. She actually slips out of her cuffs, unties her ankles, and bolts, leaving her friends to be raped to death. Way to go, Meghan. Vera, meanwhile, can't quite get her cuffs off, but she does grab the gun and manages to hold it at a pretty threatening angle.

When Baghead notices what has happened, he gets his first line of the movie, an eloquent "Fuck!" shouted while his pants are around his ankles and he's in mid-poo. Ah, dignity. Baghead catches up with Meghan, who has prepared for his arrival by grabbing a big rock. He is unarmed, it would be easy as pie to smash his head in, but instead, she just drops the rock, lets him slap her in the face, and puts up no fight whatsoever as Baghead throws her across his shoulder and carries her back. Vera at least tries shooting him, but finds that the gun is empty. She too, gets a nice slap. 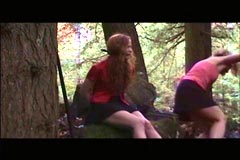 "I'm free!" "Mmmph!" "What was that? Leave you here to die? Well, you're the boss!"Now that the big, strong man has put an end to all their silly female hysterics, the girls can get back to silently marching through the woods. It's another twenty-five minutes before anyone says another word. If that sounds bad from an audience perspective, it's even worse in movie-time. Thirty-six hours pass on screen. For two days these girls let themselves be led through the woods, never eating, never drinking, never going to the bathroom, and most of all, never saying a goddamn word. Even when Baghead sets up camp and falls asleep, the girls never whisper plans of escape to one another, let alone actually try something.

On the morning of the third day, Baghead surprises the girls by bringing them a tiny lizard he found and trying to put it on them. The girls are freaked out by this, the lizard doubly so. This has no bearing on anything whatsoever, but let it be known that the lizard is the only animal in the movie, and yet it earned the actor playing Baghead an additional credit as the film's "animal wrangler." Not a bad gig, right?

Vera finally breaks down and asks Baghead what he wants, displaying the sort of distressed need for information that most people would have exhibited within ten minutes of being captured. Of course, most people also would have raised an eyebrow or two when a random guy in a denim jacket pulled them out of their car and tried to stuff them in his trunk, too, but I guess it's a little late to criticize her for that. She offers Baghead money, and when that gets no response, offers him sex. She even tries to spread her legs for him, but her ankles are tied, so it doesn't quite work. It's the thought that counts in these situations. Baghead gropes her a little, but his heart just isn't in it. He then pours some water on her feet, which can honestly have no other possible point beyond satisfying Joshua P. Warren's foot fetish. And then it's suddenly the next day. That's right, an entire day was evidently spent placing lizards and washing feet. Baghead may be a gutsy kidnapper, but something tells me he didn't think this thing all the way through.