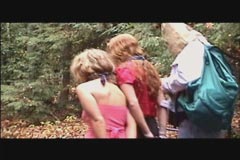 Hey, a walking in the woods scene. Didn't see that coming.On the fourth day, Baghead marches the girls a bit further into the woods, then finally speaks his second (and third) word of the movie - "Strip." The girls disrobe at gunpoint, after which Baghead ties them to a tree with a length of hose. Then, at long last, he removes his bag and reveals his scarred face. Hopefully he wasn't trying to get revenge on the girls, because they don't recognize him. Baghead (well now just Head) tries to kiss them both in turn, and fails, despite the fact that they are literally immobilized. Scorned, he sneaks off into the bushes with his rifle.

The camera, already shaky and a bit grainy, goes to black and white and rattles around more than ever. Someone in a ten dollar bear suit starts romping around the girls. Maybe it's a bear, maybe it's Bigfoot, maybe it's supposed to be taken literally and it really is just a guy in a crappy fursuit. I'm going to go with Bigfoot out of respect to bears and fear of the third option. Baghead, crouched in the bushes, shoots Bigfoot in the back. He then unties the girls, hands them each a big wad of cash, and tells them to get the hell out of there without giving them the chance to dress, or even collect their clothes. Evidently Bigfoot isn't enough of a trophy for him. He needs panties so he can prove to his fellow rednecks that he's a good hunter and he can get laid, although he isn't and he can't. As this sad fact sinks in, Baghead begins to cry. The end. 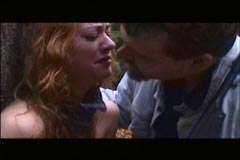 Hmm, she doesn't seem that into it. Wonder why?So. You get it? The real devil of Blue Mountain wasn't not the near-mute hillbilly who kidnapped two unsuspecting girls, stuffed them in his trunk, marched them around the mountains for four days, groped them, beat them, bound and gagged them, and made them fear for their lives before setting them free without even clothes on their backs and no possible sense of which way to go in order to get home. It was Bigfoot! Of course! It all makes sense now!

Although, I do have a few questions about that ending. For one thing, if Baghead needed some naked, helpless girls to lure out Bigfoot, couldn't he have just hired some with those giant wads of cash? The guy couldn't just go on Craigslist? You can find people willing to do anything on there. No, the only possible reason I can think of to go through all that shit just to draw out Bigfoot would be if Bigfoot only comes out if a lengthy set of circumstances are met exactly. As in, he'll only appear to devour two naked girls who are tied to a tree after being molested, humiliated, starved, and disoriented for four days against their will. But that just raises the question, isn't Bigfoot, then, not any kind of menace whatsoever? It seems like he'd only be a threat to people who were already kidnappers and molesters on a fairly complex scale. And the fact that Baghead has Bigfoot scars on his face (he actually holds the dead Bigfoot's hand up to his face to show that the claws match his scars) would seem to indicate that he was just that kind of kidnapper and molester even before his Bigfoot vendetta. Or maybe his father was the molesty one, and Bigfoot caught him by surprise and killed him, and Baghead, who was just a little boy at the time, saw the whole thing and made it his life's mission to kill Bigfoot, and the scars are from when he went through this whole ordeal previously with another pair of girls, but Bigfoot knocked him out and got away, presumably after eating the girls. I don't think there's any other way to read the situation.

Even ignoring the blatantly nonsensical ending, this movie has some serious problems. For one thing, it's eighty-two minutes long, and at least an hour of that is just walking around the woods in silence. If we cut out all the traveling and only kept the parts with actual action or dialogue, we'd barely have enough to fill an Adult Swim timeslot. That's not good. With all the fetishized foot shots, forced stripping, and awkward groping by a big, sad man who turns out, in the film's final moments, to be sensitive and nice after all, that this movie is just Joshua P. Warren's petty revenge on all the girls who turned him down in high school. Through the wounded Baghead, he gets to live out his impotent torture fantasies on two attractive, impossibly submissive victims while still remaining the good guy in the end, or at least he would be if the ending made sense and everything that led up to it didn't suck like a tornado on meth. Add in some nauseating camerawork, a soundtrack that cobbles together all the most annoying things in life, and a self-serving reverence for a natural disaster that left thousands homeless, and you've got one shitfactory of a film. I hope this is the last we hear from Joshua P. Warren, but somehow, I don't think we'll be that lucky.

Dubious thanks to forums user Handles McGee for the recommendation.