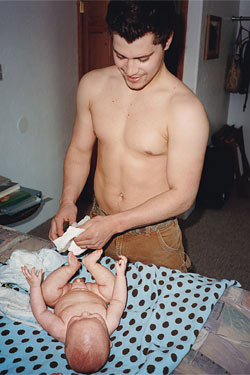 Some guy named brian that said it bree-own told me to take my shirt off and then he started taking pictures. Waddup bitches? Not much here, just maintaining. I have been mostly laying low since I was busy getting my story out there. Since like last week or whenever I was on Larry King not much else has happened.

Except yesterday. Let me tell you about what went down yesterday. Get your views on this shit.

Let me rewind a second though cuz as you probably have heard I got this badass article coming out in GQ magazine. What, what. Yo, you heard that right. Not the black president dude, not Mrs. Palin, sure as shit not Todd. It's so badass that GQ is putting out press releasings and shit to towd my article.

Got some pictures of yours truly doing the diaper business and telling people how I lay it all out how Todd bought Bristol a Pathfinder for breaking up with me.

I mean goddamn a Nissan. Did you even see my abs, nigger? At least get that bitch a Hemi or a s-series you lactonic little pimple. Todd. Like you're some kind of pimp high roller passing out cars. Lets you forget, you quit your oil job to focus on mrs. Palins career and racing snow machines.

Which one of those two pays the bills Todd? Let me give you a hint it isn't the one you wrecked into an ice fishing hut after you drank too many coorses at marty's bbq.

So anyway, I was feeling pretty pumped about my GQ spread. You know, finally getting my story out there whatever that is and just, you know, putting out words. Taking some pictures. Exciting shit.

So me and Cuddy and Tucker and Tucker's brother JT who tried to sell my socks to Radar Magazine whoever the fuck that is drove down to the supermarket to pick up some supplies. We were stocking up for a hunting trip.

Word is there is a giant like double sized moose out on the loose right now and even though it's off-season I figure I could cut it into four pieces and put seal furs on it and douse the chunks in beer. Tell the rangers I hit some Eskimos on the 219, say they were wandering around drunk off their tits and muttering about the great stone river and my mighty metal whale.

Rangers will believe that shit. They don't give no fuck since the budget got cut. I know one ranger, ranger bill, deals liquid valium out of a cooler in the back of his truck. He hasn't been paid in like three weeks cuz of the budget cuts but that shit is his own personal stimulants package.

Anyway, I'm getting off the point here, which, sorry because I am drunk as fuck right now. I have a toothache so I've been doing the leftover jello shots we have in the fridge all day and I also drank two bottles of that cough syrup with the codeine so on top of the vodka shooters I am robo-trippin. I cracked a tooth on the ice back in march just horsin around with buster and Kenny and I guess some evil got into my tooth because now it hurts like a fucker.