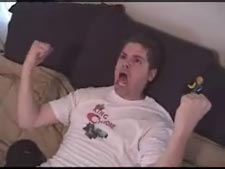 Just look at the drama in his face.Tired from a long day of unpacking and combating the wily doll, Linux heads to bedstack. In what could be considered a jab at himself, Kyanka has his character go to sleep in the same manner as most webmasters - fully clothed and shoed, on top of the covers, and alone. But alas, as he turns over in the bed, he finds the very same doll that he thought he destroyed now intact and resting comfortably on the pillow next to him! Driven to the brink of insanity, Linux screams to the heavens to know why he is being tormented so. The rage is written on his face as his fists clench and shake. In his frenzy, he somehow manages to twist himself under the blanket, which he then casts off. Naturally, this represents Linux's mental break from security and stability. Until now, he has been able to write off the doll's presence as a mistake, an anomaly, and a puzzlement. Now there is no denying that there is a force at work that he cannot comprehend, and in embracing that notion, he is leaving behind the logic of his old life. He runs through the house at breakneck speed, trying to find a safe haven and a grip on his sanity. He runs so long and so frantically, that by the time he comes to a stop, the sun is shining through the window. But the moment of security he finds quickly turns into mute horror as he realizes the truth - the doll is waiting for him. Doning his cap in an effort to make physical contact with something he knows and can understand, Linux stares at the doll, unable to believe that it could have followed him. 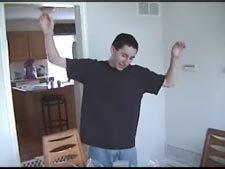 A good cop always pounces on the first sign of evidence.

The phone rings in the closet. As Linux opens the door, his pet cat races out of the closet. That imagery raises all manners of psychosexual issues which could be examined in great detail if only time and space permitted. Linux lets the phone ring, to afraid to answer. He takes off his shirt while he thinks about it, then puts it back on and answers the phone cautiously. The shrill voice on the other end threatens him with death and the transference of his hair from his head to a bowl. This of course recalls the Native American ritual of scalping one's victims, which in turn suggests the classic horror device of the ancient Indian burial ground turning a modern day person's life upside down. In a panic, Linux calls the police. One thing is certain - while Linux may have bought the wrong house, he picked a terrific neighborhood. There is a plainclothes cop (Bowen) at his door almost immediately. The cop gets right to work investigating the house. His carefully trained eye picks up the evidence of a disturbance right away. When he comes across a pile of plastic bags on a table, he knows precisely what they're dealing with - A DOOM HOUSE! 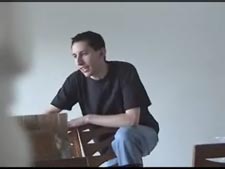 He seems to be manhandling the furniture. What could this mean?

Linux rips off his sunglasses in disbelief. How could his new home be a doom house? The cop advises Linux to pack up his belongings and move out before it's too late. As he dispenses this advice, he positions himself rather sexually against a chair, suggesting that he is more comfortably familiar with the house and its furnishings than he lets on. The cop lets himself out, but he seems to be confused about whether he is going or staying, again subtly hinting that he may have more of an interest in the house than purely from a police standpoint. Linux still has questions about what it means to be in a Doom House, but as is so often the case, merely being able to put a name to his problem is reassuring enough for the time being.

Everything goes smoothly for the rest of the day. By that night, Linux has almost forgotten about the creepy doll and the doomly nature of his house. The plainclothes cop approaches the house. Inside, the doorbell rings. "A knock at the door," Linux says, a simple misassociation on his part. That serves to show that while he is far more content now, he is still in a state of confusion. Wary of any unexpected call or visitor, Linux does not answer the door. The cop waits diligently outside until daylight, when he lets himself in to check on Linux. He reminds him that this is a Doom House and informs him that the doll is a part of the horror that he has brought upon himself by moving in. Furthermore, he tells Linux that if he doesn't vacate soon, it could very well be the end of him. The cop then leaves, but not without taking Linux's doggy gate. The message in this gesture is clear - no gate can provide the security Linux needs to save him from the Doom House.

Reginald P. Linux is not one to be easily uprooted, however. He stays put. That night, we find him playing video games. All seems to be well, until the image of the doll appears unbidden on his television screen. Just as the full meaning of that starts to sink in, the cop arrives at the door. Again, he waits until daybreak to enter, hoping that while he's outside, he'll observe Linux taking his advice and leaving the house forever. Communication quickly breaks down between the cop and Linux, as the former refuses to allow Linux to stay, and the latter refuses to give up his new home so quickly. Finally, Linux informs the cop that there has been a new development in the case. "The doll and I have come to a gentlemen's agreement," he says, tapping his throat knowingly, as if to say that his choice of words hit the crux of the matter right on the neck. 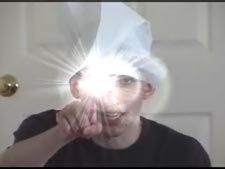 Do you want this horror? Do you?

That night, the cop sneaks into Linux's basement, where he finally shows his true colors. Wielding a dustpan like a hatchet and laughing maniacally, the cop begins to take over the house in a supernatural manner. He appears on Linux's television, then materializes out of thin air at the top of the basement stairs. He has a white towel wrapped around his head. That image has particularly strong connotations these days, and the cop does indeed live up to any American's worst fear - he admits to being a terrorist. What's more, the Doom House is built upon a terrorist burial camp! Now abandoning his policeman act altogether, the terrorist insists that Linux leaves, his point made all the more menacing as a flare of light dances at the end of his fingertips. This is no opponent to be taken lightly. Linux gives careful consideration to the terrorist's points. In the end, he decides that it is hot, American blood that runs through his veins, and that means that he has to stand against terrorism in all its forms, domestic and foreign. This invasion will not stand and must not stand. He picks up the Doom House doll and throws it at the terrorist, knocking him just far enough off balance to send him tumbling down the basement stairs. 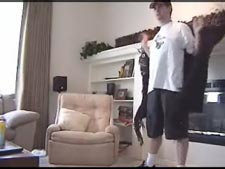 Stand proud, Reginald P. Linux. The day and the house are yours.

The violent fall is the end for the terrorist. With his last breath, he gives us a glimpse of the hellish afterlife that awaits terrorists - in his case, unbearable and unending boredom. As for Linux, he casts off the shawl of terror and breathes the doom-free air, knowing that he can now truly make a fresh start for himself in his new home. And with that message of hope, the film draws to a close.

"Doom House" is a success on so many levels, it seems unfair to try to sum up its merits in just one concluding paragraph. The performances by Kyanka and Bowen are richly textured and realistic. Linux comes to life as a man torn between the loss in his past, the confusion and fear of his present, and the hope of a peaceful future. As the cop/terrorist, Bowen delivers an understated, yet emotional performance that displays the layered subtleties of the character. He blends the cop disguise and his terrorist nature together so smoothly, it is difficult to tell where one ends and the other begins. For instance, when he takes the puppy gate, is he really trying to send a message, or is he clearing the way for himself to sneak into the house with ease later on? I'm afraid there are some questions that even I simply can't answer confidently. But as strong as the performances are, they alone cannot make a movie work. The real spark comes from the stylized directing that relies heavily on closeups to show the nuances of the emotions on the actors' faces, as well as the haunting music that fills each moment with heightened dread. Altogether, "Doom House" shows just what can be done with a small budget, given the right idea, the right amount of dedication to the craft, and the right team.