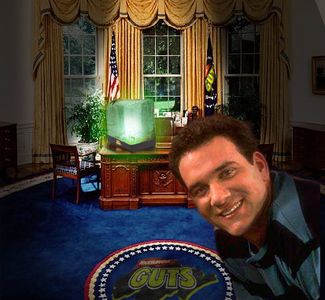 Mike: That's right! Today I am here in the GUTS Ultimate Oval Office and we are returning to the Extreme Iraq War Challenge! This is the most rockingnest, most bombingnest preemptive invasion of a sovereign country you've ever seen and it's all right here in our GUTS studio! We're sending our contestants out there to serve in a noble battle for the title of most rad! Are you ready for the action?!?

Mike: Ok then! Let's get our contestants up on the big screen! Folks, live from the GUTS Desert via videophone, here come the three contenders for a chance at the Aggro-Crag and after that maybe a ticket back to and/or peace in their homeland! Come on out guys!

Mike: First up, in red and representing the United States Military, we have Srgt. Frank "Deadeye" Quinn. "Deadeye" is 23 years old, and enjoys calisthenics and remembering back to a time when he wasn't fighting a war!

Frank Quinn: For me, GUTS equals hey man my girlfriend just had a kid, man. Do you think I could see my kid, man?

Mike: Great! That's fantastic! Next up, let's have a hand for contestant two, all dressed in blue: Representing the insurgents, we have Ghaalib "Whoa-nelly" al-Saffaah! Ghaalib al-Saffaah is 32 years old and his hobbies include car bombing, suicide bombing, and getting the biggest Spiderman comic book collection ever.

Ghaalib al-Saffaah: For me, GUTS equals the defeat of the Great Satan and its exile from the mortal world.

Mike: Nicely put, "Whoa-nelly"! You're a poet and you didn't even know it! Last but not officially least we have Qurbaan "Slammer" Ibn Hamal in purple and representing Iraqi civilians! "Slammer" is 19 years old and wants more than anything else for "Deadeye" and "Whoa-nelly" to leave his country! Sorry dude! Not very likely!

Qurbaan Ibn Hamal: For me, GUTS equals a day when I can sit in a neighborhood park without fear of death.

Mike: Sweet! But now that you've told us who you are, it's time for you all to show us what you're made of! Isn't that right?

Mike: Fantastic! So this first event is called Enduring Freedom To Kick Ass! Let's go to Mo for the rules! 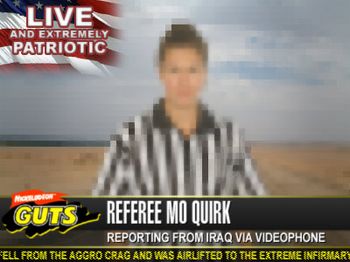 Mike: Alright, Frank is advancing now through the GUTS Desert and he is looking confident, looking strong! "Whoa-nelly" tries a Russian built anti-aircraft missile, but Franks dodges that easily! Great job red! Ok, looks like "Slammer" in the purple has a real nice form on his fetal position, so the missile didn't hit him at all. All three contestants are just doing great out there!

Mike: Thanks Mo honey, but Mike is the announcer, remember?! Mike does the talking! Frank has punched his way into Baghdad with the force of a mighty colossus from ancient times and he is just doing fantastic! Blue is doing fantastic too and I think we have some really cool GUTS Style Street Fighting starting!

Mike: Whoops, I think Frank accidentally stepped on the purple contestant there with his titan like boots, but "Slammer" held his fetal position and did his best to roll out of the way and it was fantastic! Great job "Slammer"!

Mike: Alright, now blue has accidentally nicked "Slammer" with the raging force of pure raw energy that is a bullet but I don't think it's bleeding that much, and blue and purple are just doing fantastic!

Mike: Hey we get it, purple! A missile hit you! You're getting hit a little bit! Shut up about it! Not everything's about you ok?!? You're doing fantastic and looking strong! Just stop whining loser! You're looking great!

Mike: Whoa! While purple was distracting us it looks like red has pushed through the massive, wicked fighting and slammed Saddam right out of power!

Mo: The official results are-

Mike: Wait a second! This isn't over!

Frank: Wait, what? I got Saddam.

Mike: In order to win this event, the contestant must secure the peace! Go! 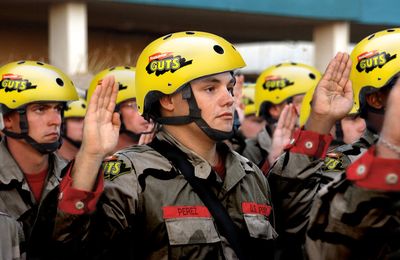 Mike: Ooh, it appears that Mo has been struck by a stray bullet wandering like a sinner from god! Keep it in Mo! Show those contestants what GUTS means!

Mo: This is…this is so painful.

Mike: Wait what is that Frank has in his hands?!? It looks like Frank has just secured the peace! Hold up that peace Frank! You earned it!

Mike: Don't be a sore loser "Whoa-nelly"! Go shoot "Slammer" if you need to work some energy out!

Frank: Finally, I get to go home.

Mike: Not so fast Mo! Just because you're dying doesn't mean you have to be hasty! In order to win this event the contestant must establish a firm democratic leadership willing to work with America!

Frank: Oh, this is bullshit!

Mike: Looks like we're out of time for this episode! Unfortunately, the upcoming Legends of the Hidden Temple had to be canceled when the Marines built an airbase on top of Olmec and filled up their sand bags with pieces of the silver monkey, but stay tuned for more of this event in a very special continuation of this episode of GUTS! Over and over again until you start to wonder if this episode will ever end or if we will still be watching it a decade from now! Goodnight folks!