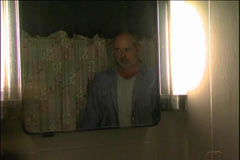 'Tard In the Mirror: The Dumb White Guy StoryEven though he didn't learn anything, overhearing that conversation leaves Darryll shaken. The house knows he's vulnerable, which is why it's the perfect time for supernatural occurrences to start tearing his life apart. The true terror begins when Darryll is getting ready for work the next morning and& can't find his favorite tie! Then, Faye wants to wear her new crucifix& but she can't find it, either! Of course, his tie is on the tie rack and the necklace is in her jewelry box, so maybe it's less that the house is trying to drive them mad, and more that they're both idiots. Still, as they're leaving, Darryll sees a cat run across the bottom of the staircase. How could this be? A cat? In a house? Satan, thy methods are fiendish indeed!

Disregarding the fluffy kitty, a universal omen of impending doom, our favorite married couple invites April and her completely pointless boyfriend over for dinner. When April goes to use the bathroom, she hears a voice calling to her. Suddenly, Slingblade appears behind her! She rushes out of the bathroom and makes a hasty exit, making up some lame excuse about having to pick up her kid across town. Note hoe she doesn't tell her supposed friend Faye about the crazy white guy lurking in the bathroom. That's a good friend, right there. Slingblade makes no attempt to pursue April and doesn't hassle anyone else, so thus far, the only thing that Darryll and Faye have had to deal with is a cat and a bad friend. I'm going to have nightmares tonight, that's for sure. 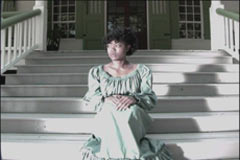 Honestly, if the worst thing you're being haunted by is bad fashion, you're probably okay.Speaking of nightmares, Faye has an odd dream, full of black girls in poofy dresses and slow-talking white women. Fortunately, the alarm goes off at the crack of ten and wakes Faye out of her horrifying reverie. She goes for a walk "deep in the woods" to clear her head of the lingering memory of ugly dresses and boring white people. Never mind that she's clearly out in the open and close enough to the road that you can hear every car that drives by. She's deep in the woods, dammit. She is shocked to see a cat cross her path - the very same cat that Darryll saw in the house! True, she has no way of knowing that it's the same cat, but she makes that assumption anyway, presumably because it's the only cat in the world, and also because Faye is goddamn retarded.

Faye plays with the cat for a while - nothing says "terror" like a purring kitty - until Slingblade shows up. The man talks so damn slow, it takes him a minute and a half to tell Faye that the crucifix she found once belonged to a girl. That's it. Ninety fucking seconds of this backwater dipshit droning on, and all he has to say is that a piece of jewelry used to belong to a girl? Color me excited! Finally, Slingblade wanders off, just in time for Darryll to come running up. He tells Faye that she's been gone for hours. This seems like one of those "Time passes quickly to indicate something supernatural going on" things, but then Faye says that she's been talking to Slingblade for half an hour. Evidently, they both just have incredibly damaged senses of time. No wonder they're so damn married to each other.

Now, I know you're on the edge of your seat from all the eerie supernatural goings-on, what with the terrifying cute cat and the horrifying slow white guy and all, but hold on, because things are only going to get crazier from here! Faye has another dream about the girl in the poofy dress. In her dream, the girl gets the crucifix necklace as a birthday present. Faye wakes with a start - birthdays have always given her the creeps - and goes to wash her face. As she tries, and fails, to scrub away the shame of being in this useless movie, she sees a figure dart by the door. She turns to pursue the shadowy figure, and, of course, starts her hunt by heading in the absolute wrong direction. 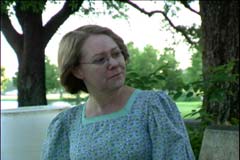 Daylight, friendly women, and public spaces: the horror movie trifecta.Faye's navigational shortcomings may or may not be responsible for her inability to find the intruder in the house, but whatever, she doesn't seem to phased by it. She goes for a walk in the park, which is where she encounters a white woman whose slow-talking abilities may be enough to give even Slingblade an achingly methodical crawl for his money. In a typically cryptic, "I know everything there is to know about what's going on, but I'm not going to tell you, because if I did, this move could end now and Amir Valinia wouldn't have to give me money for smack" sort of way, the woman basically tells Faye that her house is haunted, but that she cannot tell her who it is haunted by, why it is haunted, or what she can do about it. She also tells her that something bad happened in that house, but not what happened, who it happened to, or what could be done to set it right. She also tells her that her dreams about girls in poofy dresses have an important meaning, but not what that meaning is, how to decipher it, or why it is so important. White people are fucking useless.

As if slowly drooling vague advice all over Faye wasn't enough, the nameless white woman also appears in a parking garage as Darryll is walking to his car. She asks where he lives, and he cheerfully tells her, as a grown man will always do when asked for personal information by a total stranger in a dark setting. If only Darryll remembered Black Guy In a Movie Rule #1: Don't trust Whitey. The woman then asks him to pass along a message to his wife: her dreams are important. Yep, this lady went through all the effort of stalking Darryll at his office, just to ask him to tell his wife something that she already told her herself. Maybe this is the start of a new sub-genre: redundancy horror. I can just imagine the remakes of classic horror movies in this new style.

Faye and Darryll recount their individuals encounters with the slow-talking woman in great detail, heaping more redundancy on the already massive, steaming pile. Faye finally says something useful - that in her dream, a man gave the poofy dress girl the crucifix necklace, and that she thinks the man might be Slingblade. Gasp! Real life people and objects appearing in dreams? If that's not a sure sign of a haunting, I don't know what is!