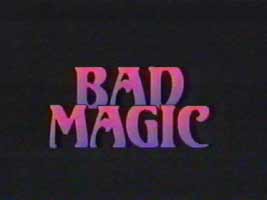 Overview: An illiterate man unleashes the slightly irritating powers of voodoo on a New York gang that was responsible for his brother's death.

Directed By: Mark and John Polonia, 2000

The Case For: The question of whether or not demons wear flannel is finally answered (they do).

The Case Against: John Polonia doesn't die. Also, the painfully bad narration will drive you completely insane, although not insane enough to possibly enjoy this movie.

Once upon a time there were two brothers named Mark and John, and they decided it would be fun to make a movie. When it was done, they decided it would be fun to make another movie, even though no one liked their first one. No one liked that one, either, but that didn't stop Mark and John. They kept on making movies, each one a greater travesty than the last. "Please stop, Mark and John," the public cried. "We can't take anymore!" "No," Mark and John shouted back. "We will make another movie - one that will make our previous movies look like 'Bridge On the River Kwai!' It will star a fat black man who can't read and it will make no sense at all!" And with that, Mark and John went about making good on their fiendish threat. Yes, the Polonia brothers, the creative minds behind "Feeders," "Feeders 2," and "The House That Screamed" (in which they threatened the possibility of a "Feeders 3"), are back with yet another ninety minutes of unadulterated crap that should be buried deep beneath the surface of the earth and never spoken of again. This time they're calling it "Bad Magic," and while it may have the same cast, sets, and music as all of their other movies, this one stands out for one reason and one reason only: this time they have their very own black person! The presence of an honest-to-Jebus black man enabled the Polonias to take the project in new directions, as exhibited in the film's tagline, "He's Riding A Soul-Train To Terror!" You know, I was just thinking that the Polonia films were really great, except that they suffered from a lack of shameless exploitation. Good thing "Bad Magic" came along! Hip hip hoo-kill me! 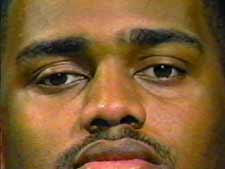 Look at those grieving eyes. They long for revenge. Revenge and cake.

Most of the movies reviewed on Something Awful have a wonderful, if brief period of doubt where I get the simple pleasure of saying, "Hey, this isn't too bad, at least so far." Not so with "Bad Magic." This one rockets the audience right into a realm of unfathomable stupidity from the very first line. The movie begins with indescribably shitty narration, courtesy of our protagonist, Renny. At the risk of appearing racist, Renny is the reason that black people have had to struggle for equality for so many years. Evidently no one told him that he's allowed to use the entire alphabet on film, as his speech is generally confined to about twelve letters. It's fairly obvious that he's reading from his script as he stutters about voodoo and devil worshipping, which makes it even more embarrassing when he loses his place. Meanwhile, quick clips flash across the screen. In typical Polonia fashion, they are just bits and pieces from later on in the movie, and thus do not merit any specific mention at this point. The opening narration sets the pace for the rest of the movie - terribly acted, terribly written, terribly edited, and shot with a camera that the Polonias bought at a yard sale for four dollars. 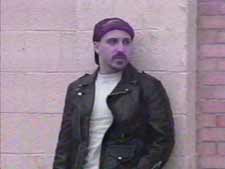 Ajax took control of the Red Claws through his superior leaning abilities.

We transition to a couch in an office, where our hero lies sleeping. Renny suddenly wakes up as if from a bad dream. Alas, his nightmare was real - he really is in this movie. After a series of stock footage clips of the New York skyline, Renny explains how his brother Amos was killed soon after he joined a gang called the Red Claws. We are treated to a flashback sequence that shows off the gang members (all four of them). Of course, by "flashback," I mean bits and pieces from later in the movie. The Polonias would never go so far as to actually film parts of the backstory. That would take, you know, work. We get to see some more NYC stock footage to remind us that we're in New York and NOT Mark Polonia's apartment, then its straight off to the graveyard for one of the movie's explosive action scenes. Ajax, the leader of the Red Claws (Marty Beck from "The House That Screamed") visits Amos' grave. In most films, this sort of scene would be used to show the character's inner strife over the death of his companion and the emotion on the actor's face would speak louder than words possibly could. Unfortunately, Ajax's facial expressions basically range from "mouth open" to "mouth closed" without a lot of stops in between, so the scene really just plays as a demonstration of Ajax's ability to stand in places and look at stuff. Way to go, Ajax. Some disembodied laughter scares him off, so he runs off camera. Well, "runs" might be a little strong. It's more of a halfassed crabwalk, but who's counting? We learn quickly that the laughter came from Renny, as all of his laughter sounds exactly the same in every scenario. Naturally, this doesn't make what we in the business call "sense," since Renny doesn't have any of the powers that allow him to laugh at people over great distances yet. Clearly, this movie's sucking power is beyond all reason. 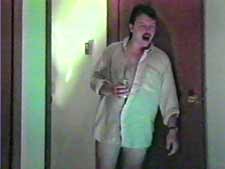 Back in his office/apartment/secret lair, Renny provides endless amusement with his attempt at narration. He seems so confused as to where to put the emphasis in his sentences that I'm convinced he's actually just some Rwandan refugee that the Polonias bribed to be in their movie by promising him a loaf of Wonderbread. After listening to his mauling of the English language a few times, I've pieced together some sort of story about two homosexual rednecks who decided to summon a demon named Carnage. After all, if you're going to make a new friend to invite to your gay lovefest, no one's more cuddly than a guy called Carnage. For the record, Carnage's demon getup is about as convincing as my last Halloween costume, but probably not quite as expensive. His demon nature is represented by a horrendous excuse for a mask and his stylish flannel shirt. I don't know about you, but if I was a demon, I'd wear some spiked iron death-armor, or maybe nothing at all, so that everyone could marvel at my fantastic demon physique. I would not, however, wear fucking flannel. Much to the hicks' surprise, Carnage starts killing old women. Then he vomits corn on one of the rednecks, which is presumably how demons say hello. Carnage kills the vomit-covered redneck, and leaves the other insane. At least, we're told he's insane. All he really does is stand on a bridge over a small pond, but I guess that's pretty insane.