Challenge 5: The Big Sleep (with lasers) 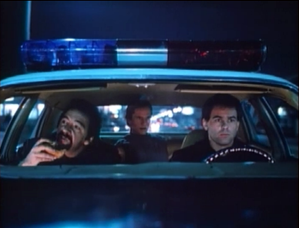 There's nothing worse than being wrongly accused of murdering transients when you're really just a time-traveling vigilante playing retarded games with an evil wizard.This is the only challenge that somebody seems to have put a little bit of effort into. Of course it's still riddled with failure, but at least it's a little more complex than "teleport into room, type C:LASER.EXE into armband." Paul starts this part of the saga by waking up in a filthy alley full of garbage next to a dead body, like he does every Saturday. Mestema sends him a courtesy newspaper with tomorrow's headline, showing that Gwen will be the next victim unless he stops a serial killer. Some cops show up and arrest Paul because he's standing next to a dead body, which is just blatant profiling. Then they make fun of his clothes for a while, which is totally justified.

Fortunately, Paul's computer also comes with a James Bond handcuff laser, so he quickly frees himself and jumps out of the squad car. After some pointless detective work, he eventually activates Google Maps and blunders his way over to Gwen's dance studio, where he stops the killer mid-stabbing by - can you guess what inventive problem-solving approach he'll use this time? That's right, he shoots the killer with an arm laser. Even Paul is getting bored with the constant laser-fest, so he decides to show off by bouncing his shot off a mirror, that smug bastard.

Interlude: Paul threatens to "zap" Mestema, who retaliates by summoning a demon face, which Paul then lasers to death.

Challenge 6: The Cave of Pointlessness

As stupid as that last interlude was, it's nothing compared to the utter waste of time that is this next challenge. This time Paul materializes just outside of a cave, with Gwen's voice calling to him from inside. He hesitates before going in to the cave, because goddamn it, two caves full of styrofoam rocks and dry ice is his limit for one day, but then he goes in anyway.

Inside the cave, he does battle with one of the goblins from Troll 2 in a thrilling fight sequence that mostly consists of him and the goblin chucking rocks at each other. Eventually Paul decides to cheat and laser the ceiling to drop some rocks onto his opponent's head. This causes the goblin to turn into an angel, who tells him that "you would have won had you simply not walked into the cave."

Wait, a game where the only way to win is not to play? Surely his sentient computer should have known that one. Then he fucking wins anyway, even though he didn't stay outside the cave. Only the mightiest champions can overcome the legendary challenge of "don't enter the mysterious cave, or do, either way it's cool with me."

Intermission: Mestema tells a story about torturing a cat by setting it on fire, which must make him a big hit at parties. At least he took the time to summon up his badass story-telling throne.

For the seventh and final challenge, Gwen and Paul appear in a junkyard full of broken airplanes. Paul tells his computer to "prepare laser mode," as if the previous 8,000 things he shot with lasers somehow weren't preparation enough. Three sand people and a Jawa roll up in some go-carts with lots of pointy things glued to them. Paul lets them pull Cal off his arm just so he can kill them with the power of trigonometry: He yells out a list of angles, and lasers shoot out in the exact directions to kill the sand people. Man, he even found a way to geek up cold-blooded murder!

A car chase / laser battle ensues, and Gwen gets really into it. The sequence ends with Paul and Gwen crashing dying in a huge explosion, which of course successfully completes the challenge.

What in the blue fuck does it take to fail one of these challenges, anyway? Could Paul have saved himself and the rest of us the last hour by just shooting himself in the head at the start of every one? He could have at least tried, we could have all enjoyed watching that.

Aftermath: Paul calls Mestema fat, then he challenges him to a fistfight with no magic/computers/lasers. Mestema, the thousand-year-old prince of darkness, agrees that a wrestling match with a scrawny nerd is a worthy contest, so he accepts.

This is probably the worst fight scene in the movie, and believe us, the bar was set pretty low after that whole zombie-pushing fiasco. After about three seconds of rolling around, Paul and Mestema end up where all climactic battles in movies like this are waged: at the edge of a cliff over a river of lava. Mestema breaks their gentleman's agreement and starts speaking some magic words that cause the cliff to give way underneath him, and he plunges into the lava. Odds are you didn't understand that last part since it doesn't make any fucking sense, so let's try again: Mestema cheated during a fair fight by using his magic to hurl himself to his own fiery death. Not how we expected a wrestling match with the Devil to end, but suicide by lava is at least sort of Satanic.

Paul almost ends up in the lava with him, but he yells for his wristband computer and it shoots a laser pole out to him, which he grabs on to. Let's not dwell on little details like "how can a six-ounce piece of jewelry that's not attached to anything pull a full-grown man out of a pit," it just does, okay? In a puff of dry ice, Paul and Gwen are teleported back to his apartment, where we swear to all that is holy the following dialogue ensues:

PAUL: Let's get what?

GWEN: Well I talked it over with Cal, and it all adds up!

[fade to black, credits, we start filling the bathtub and plugging in hair dryers]

The Dungeonmaster was doomed to failure before it even started. The "team of directors making loosely connected vignettes" thing has been pulled off before, but that requires each of the vignettes to stand on its own as an interesting piece. With 73 minutes of running time split among 7 people, there was no way that was going to happen, no matter who the directors were. Some of the "challenges" last under 5 minutes, for fuck's sake.

That being said, even within the constraints this movie is a complete disaster. The dialogue varies from stupid to downright embarrassing, the plot is utterly nonsensical, and the special effects are pretty damn laser-happy for a movie that's mostly about magic and mythical creatures. The only reason that The Dungeonmaster doesn't reach the perfect -50 mark is because of the lead actors: Richard Moll is entertaining in a scenery-chomping way as the evil wizard Mestema, and Jeffrey Byron as protagonist Paul genuinely seems to be trying with the godawful, piecemeal script that he's been handed. Everyone else involved with this movie needs to ask their computers to check data on the relative merits of suicide versus living with the shame of having brought The Dungeonmaster into the world. We're pretty sure we know what the "probable outcome" will be.