Through some long-winded exposition, Mestema/Satan reveals that he's cooked up seven challenges for Paul and his computer, the stakes being his and Gwen's souls. As you've no doubt guessed, each challenge is directed by a different one of the seven directors. In an attempt to be fair and equal, and also to keep our brains from oozing out onto the keyboard before we can finish, each challenge gets one paragraph below.

Paul must have hit his head on a low beam in laser-space, because he starts this challenge unconscious on the ground in a field somewhere. While he's passed out, two midgets wearing Mongolian tribal outfits show up and steal his arm-computer. They run about fifty feet and drop it on a stone altar under a giant troll/ape/ugly statue, where Paul picks it up about ten seconds later. Before he can say "well that was easy," the statue comes to life and starts stomping around and shooting forehead lasers at him. Fortunately, Mestema was nice enough to throw in a free laser cannon with the arm computer, so Paul shoots the statue right in the forehead gem and it blows up. We're not sure why the villains always have to put giant, glowing weak spots on their evil creations; must be some sort of union rule.

Postgame: Paul and Mestema have an exchange that we can't even begin to figure out, either because they skipped a bunch of lines or (more likely) because the writing is just that bad.

This time, Paul wakes up in a cave that appears to be the world's leading dry-ice quarry. A couple of zombies start approaching him, but they're clearly not menacing enough because he just walks up and pushes one over, then chops the head off the other one with a sword. A tiny puppet with a stupid voice introduces himself as Ratspit, master of the crappy undead. Some more zombies pile into the room, but Paul shoots an arm laser at the crystal Ratspit is holding and they all vanish.

For the lightning round, Paul faces his deadliest foe yet - a zombie who just stands there. Paul has a staring contest with the zombie, and he probably wins because it disintegrates into more lasers.

Afterward: Mestema gets a little grope-happy with Gwen, prompting him and Paul to have a battle with crappy special effects that look vaguely like dragons. Nobody wins. 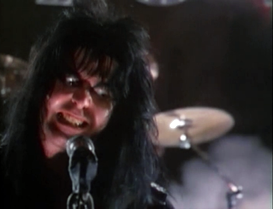 He's not a man so much as he is a mobile collection of hair, eyeballs and teeth.The dragon battle fills Mestema with a desire for small talk, so he asks Paul what kind of music he's into. Paul uses his arcane powers to summon up some easy-listening, in return for which Mestema banishes him to a hair-metal concert: "You have defeated my armies of the undead, but can you elbow your way to the front of the mosh pit?!"

The headliner is none other than W.A.S.P., whose normal music videos are only marginally less stupid than this segment, so they must feel right at home. Paul shoves his way up to the stage, but is quickly subdued by the power of rock 'n' roll (a laser-shooting guitar.) Meanwhile, the lead singer menaces Gwen with a rubber knife and/or the circular saw blades that are glued to his arms. Finally Paul remembers his magic computer that can do anything, and sets it to "disintegrate by high-frequency sound," which blasts all the members of W.A.S.P. into a billion pieces. Thank God for that.

Wrap-Up: Mestema tries to spark up another small-talk session, but Paul gets all bitchy and tries to laser him in the face. This doesn't work, because apparently Mestema boasts a "barrier that has the energy of a million souls."

Challenge 4: Night at the Wax Museum

Apparently this is the couples' round, as Paul and Gwen are both teleported to an ice cave full of frozen people, including Albert Einstein, a samurai, and a werewolf. Paul observes that "every criminal in the world is here," because unlike most people, he knows that Einstein liked to rob convenience stores in his spare time.

Suddenly all the lights turn from blue to red, and everything in the cave starts to wake up (except for Einstein, that lazy bastard.) The samurai starts to get the better of Paul, but ends up being electrocuted when Paul blocks his sword with his computer arm. Eventually, Paul grabs a giant ice crystal out of Einstein's frozen hands and smashes it on the ground. This is the correct solution to the challenge, and if you can figure out why, feel free to let us know so the nightmares will stop.

Bonus Round: Mestema has the hots for Gwen, and tries to tempt Paul into giving her up with treasure and imaginary sluts. The sluts seem to make him pretty happy, but Gwen nags him into continuing to fight for her honor. Oh, and Paul's response to Mestema's offer to "say the word and it ends" is "the word is: forget it," which anyone can plainly see is TWO GODDAMN WORDS.