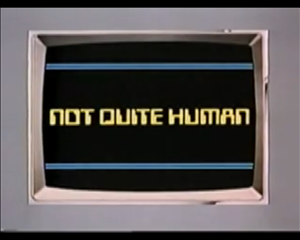 Overview: Before the era of email inboxes, the folks over at Walt Disney imagineered a more magical way to spam people with a shitty product: make a 90 minute "movie" with a budget of about $3, then relentlessly advertise it on a children's channel. Suddenly millions of kids think a movie about a robot that coincidentally looks exactly like an underpaid actor is the coolest thing since Han Solo french kissing an exploding T-Rex! Yeah, if you grew up in the late 80s or early 90s and had the Disney Channel, you saw lots of commercials for Not Quite Human, aka "that movie where the weenie has a power plug in his ankle."

The Case For: Jay Underwood is really good at jerking his head around.

Know an awful movie? Email me! 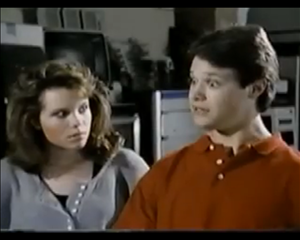 Becky doesn't enjoy the company of her cyberbrother and hits him with several 'zinger' nicknames such as "aluminum breath," "microbrain" and "nickelback." Not Quite Human is totally different from all other insipid programming about teenagers that cable has shat out since the dawn of brainwashing children for money. It's about a teenage robot named Chip, even though Chip's only mechanical trait is his unflinching delivery of 239 consecutive puns without breaking down in tears.

Chip's "family" is a super genius dad and his young daughter Becky, who like all girls in 1987 loves cheerleading, boys, and squealing in frequencies high enough to cause mass suicide among bats. We are repeatedly reminded that there is NO MOM in this family because Becky's MOM IS DEAD, REALLY, which is VERY SAD and also one less paycheck out of Michael Eisner's pocket. Wacky Dr. Dad has been slaving away for years and has finally completed good old Chip, a robot that looks just like he did when he was 17, except of course more handsomer and smarter and appealing to 16-year-old girls and oh by the way I'm going to enroll him in high school and install a few cameras. For, erm, science. 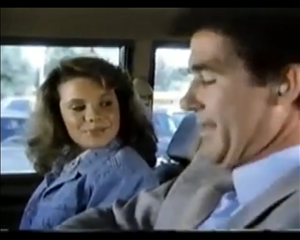 "Hi there, Daddy~:3"But in order to placate Daddy'sraging midlife crisiswhimsical family adventure, he and Becky have to skip town, which makes Becky very upset about leaving all of her friends and is going to let her old man hear about it. She goes on a big rant about how her life is an endless spiral of agony because not only is her MOM DEAD, but her Daddy isn't nearly rich enough -no seriously, she bitches that she'll never be popular because none of their friends have to rent their huge mansion-homes like they do. So they have a big stupid fight that doubtless legions of unique 1980s indigo children could identify with, only to make up five seconds later with the following exchange:

Becky: I just want you to love me, Daddy!
Dad: I'm sorry honey I was too busy thinking about my YOUR DEAD MOM!
Becky: Oh that's so cool dad I can't wait to move I love you so much!

Somehow Dr. Dad can instantaneously win any argument with the little tramp by bringing up how dead her mom is. If I end up having an unruly daughter, I know 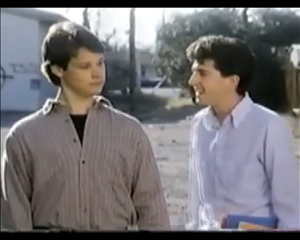 Oy. one way I can change my marriage to reign her in!

Anyway, after a detailed conversation about Chip's pooping habits and an awesome' three-minute montage of grocery shopping set to a pumpin' 80s beat, we're in our new town and new school! It is here that Chip, according to Dr. Dad, can begin his journey of "defeating human prejudice." Fortunately he doesn't have a lot of work cut out for him, because every teenager in 1987 seems to have been blindingly white and fond of amorphous sweaters. Well, except for Jewboy, but he's just some geek who enjoys cowardice and lying and having a nose you could slice foreskin with.