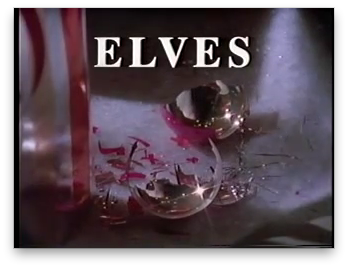 Overview: In this delightful holiday romp, a retired detective/mall Santa has to stop an evil Nazi elf from impregnating a genetically superior virgin and heralding the rise of the Fourth Reich and also the anti-Christ.

The Case For: Probably the most incredible combination of IMDB keywords you'll ever see, including (but not limited to): Bare Breasts, Eugenics, Incest, Dead Woman in Bathtub, Christmas Horror, Electrocution, Mutant, Nude Woman Murdered, and Death of Mother.

The Case Against: Christmas setting and goofy monster make this unwatchable as a horror movie; Nazi incest and gruesome murders make it unbearable as a holiday film; general incompetence and insane premise will make you regret viewing it for any reason.

Where can we possibly begin with Elves? How about the fact that even its title makes no sense, seeing as how there's only one Elf in the actual goddamn movie? Or that this singular Elf isn't really much of an Elf in the first place? Certainly not the usual vaguely effeminate green-hat-and-tights variety, humming cheery tunes with little mallets in one hand and wooden toy trains in the other, anyway. It's more of a...it's a...actually, come to think of it, even the characters in the movie can't seem to figure out what the hell it's supposed to be, which is probably why they keep referring to it as a "gremlin" and (our personal favorite) "fucking little ninja troll."

Still, where there's an Elf, there's gotta be a Santa Claus, and naturally he's the cheap knockoff, mall-dwelling Bad Santa kind, aptly played by hard-living, chain-smoking Dan Haggerty, a.k.a. Grizzly Adams, a.k.a. the cinematic titan and lumbering beardgarden who incidentally just happens to be the only actor ever to have had his star removed from the Hollywood Walk of Fame (shockingly for reasons not involving Elves). If all that doesn't get you in the holiday spirit, how about a score composed of homeless people defecating into tubas to the tune of Christmas carols?:

(The 'music' in this movie is actually the work of Ukrainian jazz musician Vladimir Horunzhy, so you might want to hold off on picking up that hot new Ukrainian jazz album you've been eyeballing.)

Anyway, back to the action-packed thrillride that is Elves. The movie follows forgettable idiot teenager Kirsten Blande-Boering and her horrible family, which consists of (1) her precocious but unlovable shithead little brother, (2) her insane Nazi/incestuous necromancer of a grandfather, and (3) her animated skeletal remains of a mother, who falls somewhere between Maleficent and Serial Mom on the comically evil scale, and whose hobbies include flower arranging, emotional battery, macramé, and torturing small animals to death in toilets. And let's not forget Dan Haggerty as unwashed trailer denizen and ex-detective Mike McGavin, who in addition to looking like Kenny Rogers after a 12-year all-Sizzler binge starts the movie off on a high note by getting evicted from the rusty shitbox he calls home.

Fortunately for Grizzly Mike, there's about to be a convenient job opening! Cut to the local mall Santa, who is hard at work trying to lure little boys to his pungent basement rapelair by telling them there are Nintendos down there. Before we can even begin to contemplate just how many children have already had their skeletons added to Santa's workshop of horrors, Kirsten and her friends show up to "goof on Santa," - "goof on" in this case meaning "get creepily molested by" - a challenge that jolly old St. Nick meets with every ounce of molesty gusto he can muster.

When his usually foolproof pickup line of "SANTA SAID ORAL" backfires in the form of a smack upside the head, Santa retires to his dressing room to blast a few rails of Persian Brown and mutter angrily into his prop beard. Sadly, his nasal holiday is rudely interrupted by everyone's favorite little ninja troll, who craftily sneaks into the room by walking in through the door right in front of his fucking face and shanks him right in the ol' sack of toys. To death. On the plus side, this sequence officially makes Elves the most effective and logical anti-drug advertisement ever filmed. Remember kids, winners don't do drugs, and they don't get stabbed in the testicles by Nazi gremlins either!

But hey, great news for our big hulking hairy tub of hero, who hears about the job opening while enjoying his usual hearty breakfast of stale coffee and an entire carton of cigarettes, and, like any respectable American, immediately jumps at the chance to fill a position left vacant by the grisly unsolved homicide of his predecessor not 24 hours earlier. Of course, for Mike this is more than just a job opportunity, it's a chance to finally cash in on all those painstaking years of scraggly beard cultivation, gut expansion and parasite husbandry. The added possibility of permanently traumatizing innocent children with his bodily funk; well, that's just icing on the proverbial cake.

Before Mike has a chance to enjoy the fruits of his new career path, he runs into Kirsten, the 'elf,' and the random hit squad of Nazi goons who like to shoot up department stores for the glory of the Fazerland or whatever. "First you're Santa, then you die," observes Mike, beginning the rigorous mental preparations for his second career as philosopher-king in case the whole Santa gig doesn't work out. By the way, while you're at the mall, why not pick up a shotgun, the perfect gift for Mom?