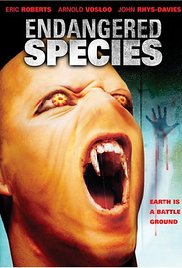 Overview: Detective Eric Roberts has to solve the case of a serial killer/alien poacher who is murdering literal truckloads of people and carting them off to make human-skin rugs or jackets or something. His law enforcement weapons of choice include wrongful arrest, ignoring search warrants and other inconvenient laws, and a fleet of cars that explode for no good reason.

The Case For: Passes the Bechdel test, although the two women having the conversation are stripping naked for the camera at the same time, so it kind of feels like a technicality.

The Case Against: This is one of those sci-fi movies where the premise seems kind of okay at first, but unless you have extreme Eric Roberts-related anterograde amnesia, you'll probably think about the plot for more than five seconds and it will all unravel horribly.

Like so much of the rest of Endangered Species, the production team quickly forgets what they were doing, and so the pulse-pounding intro somehow degenerates from rhinos and tigers into an otter having a snack and a terrifying glimpse of that deadly apex predator, the sea turtle. Also, flashing a bunch of rhino and turtle pictures next to the list of acting credits just makes us imagine that maybe this is going to be a gritty Ninja Turtles spin-off movie featuring Eric Roberts as Rocksteady, a movie concept which, while completely terrible in every way, would still be high-concept social commentary compared to most of our usual fare.

Anyway, back to the premise: aliens walk among us in disguise, and one of them is a trophy hunter who specializes in stuffed and mounted human beings. Or maybe he's making people-skin leather jackets for the mass galactic market, we're not entirely sure. The movie seems to talk a lot about leather jackets, but you'd think in that case he would be staking out the Golden Corral to pick off people in mobility scooters for his raw materials, instead of bursting into 24-hour gyms and only taking specimens with a perfect appendix and original boobs. Maybe he's mounting and stuffing humans after all, although then his decision to suddenly switch from fitness centers to the shittest Hobgoblins-tier strip club in town for his targets is an even bigger mystery.

Basically, we have no idea what the hell is going on. But don't worry, Detective Sgt. Eric "Fuck Warrants" Roberts is hot on the trail of the killer! Too bad said trail is littered with baffling decisions and terrible chase scenes:

Our favorite part (aside from John Rhys-Davies throwing himself in the trash where his character belongs) has to be the cargo-cult attempt at parkour. You just know that somebody saw that staircase-vaulting thing in another movie and thought it looked totally sweet, but they failed to notice that when there's only one fucking staircase it's just a slightly slower way to go down three or four steps. And Eric Roberts still can't catch him.